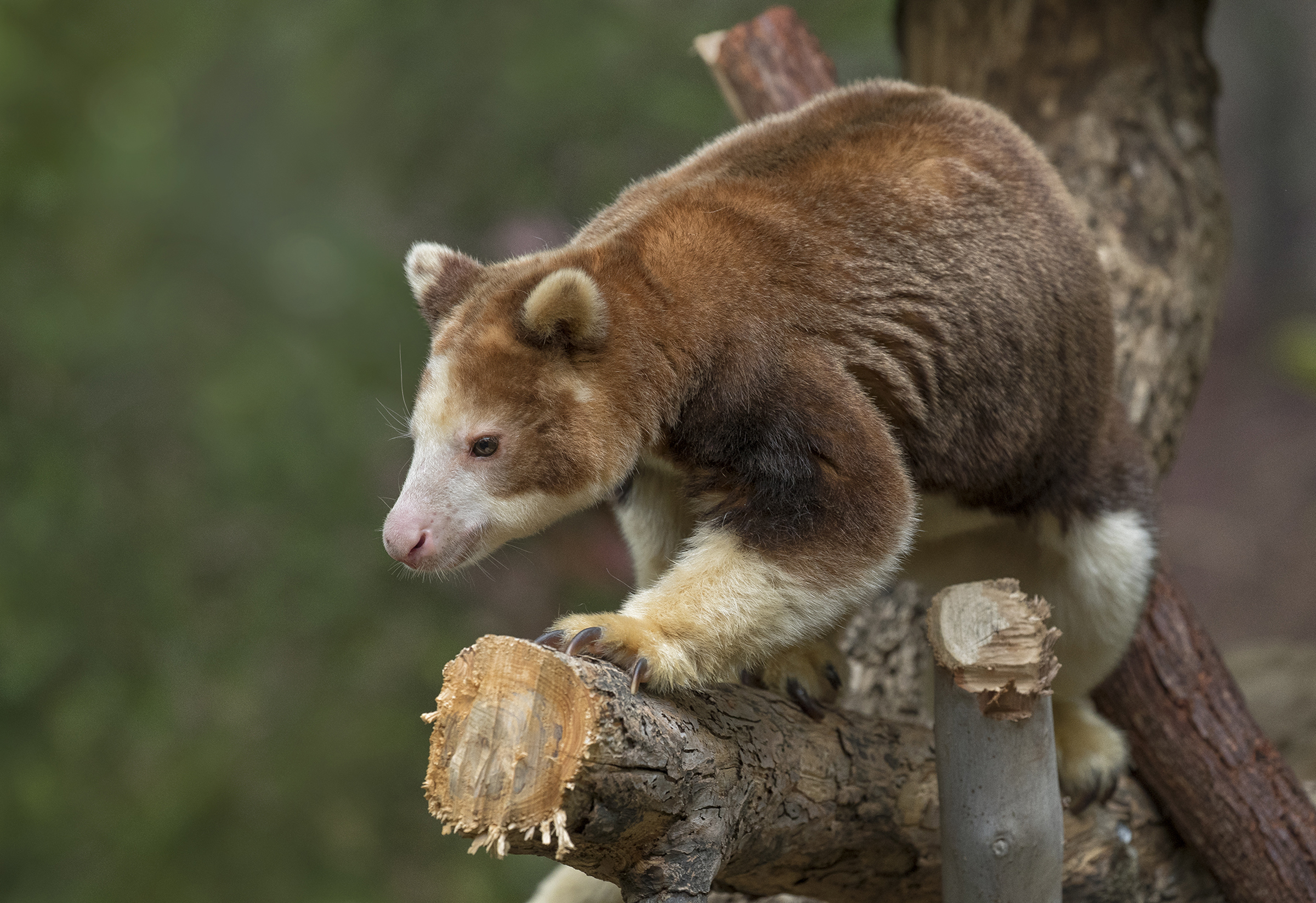 Kangaroos in the Trees

With a small, expressive face, a prominent pink nose, and teddy-bear-like ears, Matschie’s tree kangaroos seem like a cross between an opossum, a koala, a long-tailed lemur, and a plush toy bear—maybe with a bit of house cat thrown in. While these marsupials have the “kangaroo” name, they bear little resemblance to their much bigger macropod cousins. “Most people are really familiar with kangaroos and wallabies, but tree kangaroos occupy such an interesting niche in the marsupial family, because they are primarily arboreal,” said Lori Hieber, a lead keeper at the San Diego Zoo Safari Park. “There are 14 species of tree kangaroos, native to Australia, Indonesia, and Papua New Guinea. It’s great to be able to highlight the diversity that exists in the marsupial world by having one of the tree kangaroo species here at Walkabout Australia.” BRANCHING OUT
Long claws give tree kangaroos the ability to quickly climb and securely hold a position in a tree, and their long tail helps them maintain perfect balance on even the narrowest branches.

With a body just over 2 feet in length—plus a tail that is almost that long—a Matschie’s tree kangaroo Dendrolagus matschei weighs only about 22 pounds when mature. Compare that to a western gray kangaroo, which can weigh up to 120 pounds and stand up over 4 feet tall. Instead of hopping on the ground, Matschie’s tree kangaroos climb high in the trees of montane rain forests in Papua New Guinea to feed on leaves. They use their sharp claws to grip branches and their long tail for balance in the treetops. View from the Top

At the Safari Park’s Walkabout Australia, guests can see Matschie’s tree kangaroos in their new tree- and plant-filled exhibit adjacent to the Zuest Family Station. Large windows allow people inside the building (designed to resemble a traditional Australian wool shed) to get an up-close look at tree kangaroos, and a glass wall along the outdoor path to the station provides even more views of the habitat. Safari Park guests might see a tree kangaroo making its way along the branches of the large climbing structure, lounging comfortably on a high platform, enjoying the cooling misters and vegetation in the exhibit, or discovering enrichment opportunities—including concealed special treats—that are provided throughout the day, encouraging the animals to actively explore their surroundings.

When Polly, a two-year-old female, first arrived in San Diego, she spent several weeks acclimating at the Safari Park’s Paul Harter Veterinary Medical Center, before coming to Walkabout Australia. Spike, a five-year-old male who arrived closer to the exhibit opening, spent less than a week there and was able to complete the majority of his quarantine period at the exhibit. “We had monitors to watch them in their bedrooms, and while she was there, the main monitor somehow always seemed to be focused on Polly,” said Lori. “She’s such a doll. Everyone who sees her just falls in love.” Polly was the first to explore the new habitat at Walkabout, and she is now rotating time on exhibit with Spike. “They are such individuals, and they both have so much personality,” said Lori. “They’re curious, but they’re also reserved.” Tree kangaroos are solitary animals and usually only come together for mating. That may be in the cards for Spike and Polly, as keepers look forward to them becoming participants in the Association of Zoos and Aquariums’ Matschie’s tree kangaroo Species Survival Plan (SSP) breeding program, to help boost the numbers of this endangered species. “That’s our hope,” said Lori. “In 2016, it was estimated that only 2,500 Matschie’s tree kangaroos remained on Earth. They face many challenges, including deforestation that has destroyed much of their native habitat.” In addition to losing much of their habitat to agriculture, tree kangaroos have been hunted by humans, for food and sale in wildlife trafficking.

As part of participation in the tree kangaroo SSP, San Diego Zoo Global is partnering with the Tree Kangaroo Conservation Program, established by Seatttle’s Woodland Park Zoo, working to conserve the Matschie’s tree kangaroo’s native habitat on the Huon Peninsula of Papua New Guinea. The Tree Kangaroo Conservation Program joined with local communities and the national government to help set aside the protected YUS conservation area. This creates a safe home for tree kangaroos and other endemic wildlife, where rangers are trained to patrol and monitor wildlife populations. In addition to fostering wildlife and habitat conservation, the program supports local community livelihoods in Papua New Guinea through global partnerships, land protection, and scientific research. Despite their obvious differences, kangaroos and tree kangaroos are both marsupials, and like other marsupials, young tree kangaroos grow up in their mother’s pouch. Tree kangaroos have the longest gestation period of any marsupial: 40 to 45 days. When the female gives birth to one tiny joey, it climbs all the way up its mother’s belly and makes its way into her pouch, where it finds a nipple that provides milk. The joey stays inside the warm, protected pouch for 8 to 10 months, and it may return to nurse for up to 2 months after emerging.

One thing tree kangaroos don’t do is hop. Unlike other kangaroos, their forelimbs and hind legs are about the same size, and while they are slow-moving on the ground, their sharp claws help them climb with speed and agility. They have remarkable dexterity and can make complex movements with their forepaws: they have the ability to grasp stems or vines between two fingers; oppose their first and second fingers to other fingers; and bend their forepaws sharply at the wrist. Tree kangaroos can independently move all fingers and toes—an ability only seen in two other non-primates, the brown rat and the northern quoll (another Australian marsupial species). In addition to their claws, a tree kangaroo’s paws are also designed to help grip surfaces, with soft, high-friction pads and prominent tubercles—knobby projections like the bumps on a table tennis paddle—on their feet. No wonder they can securely traverse long branches and scurry up even the tallest trees! And they have another talent: long-distance leaping. A tree kangaroo can leap up to 60 feet, down from a tree and onto the ground without getting hurt. At Home in Walkabout

As guests watch Polly and Spike at Walkabout Australia, they will see some remarkable climbing behaviors and witness a lot of treetop naps (tree kangaroos spend about 60 percent of their time sleeping). “The tree ‘roos have discovered their ficus tree on exhibit, and spend a good amount of time munching on it,” Lori said. “We’ve also started offering more of their food and browse while they’re out there,” in addition to the food they get when they return to their bedrooms at the end of the day. “So far, Polly’s favorite food has been yams—that’s the key to her heart right now.” 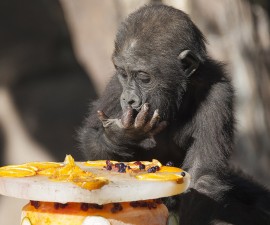 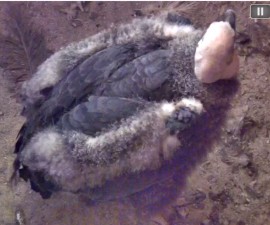