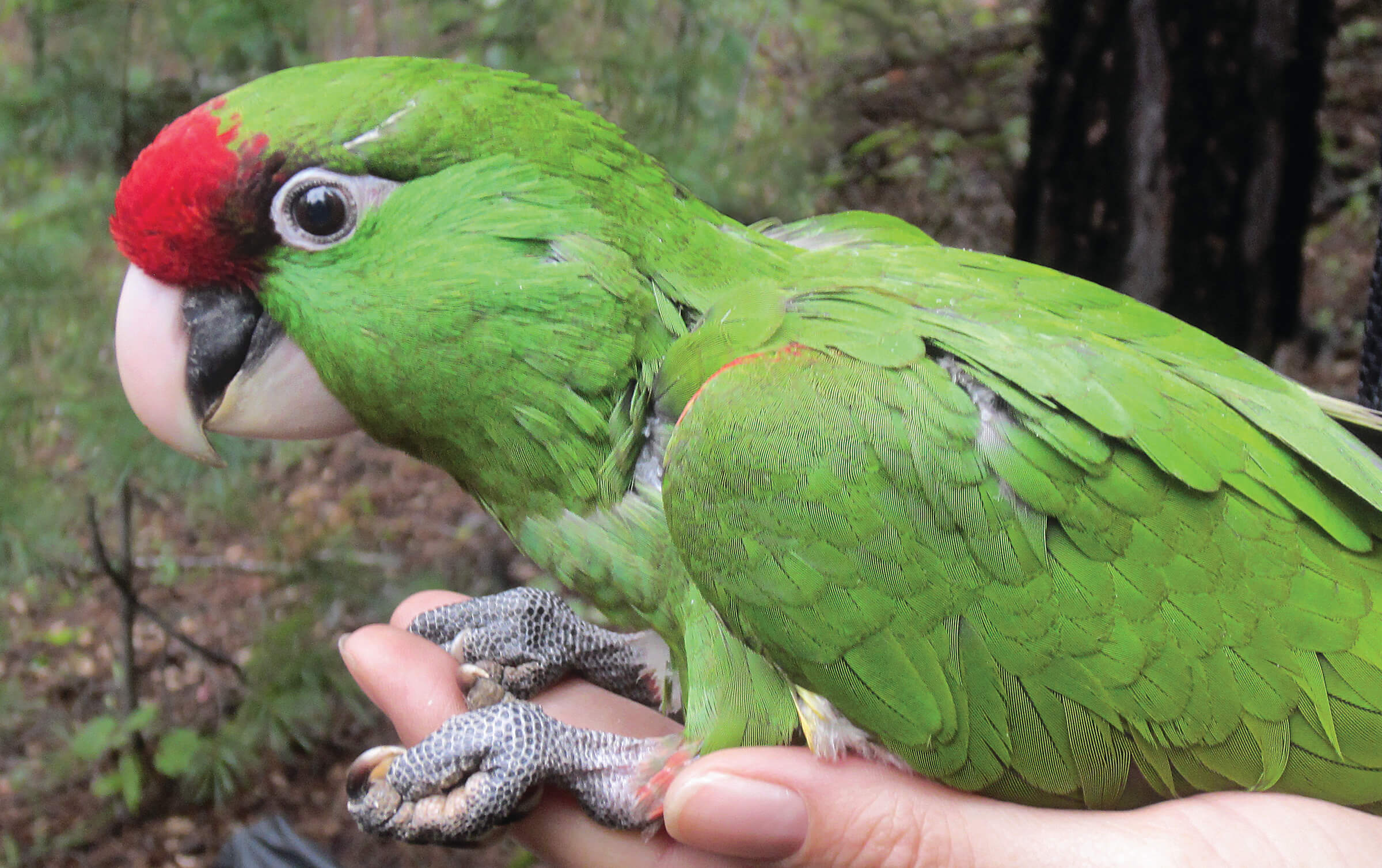 Shamrock-green with scarlet highlights on its head and wings, the raucous thick-billed parrot, also called cotorra serrana (“mountain parrot”) in Spanish, is one of the last surviving parrot species native to North America. Once roaming across mountainous “sky islands” from the American Southwest into Venezuela, this bold parrot can tolerate cold weather, but migrates south when the snow flies. The parrots forage for energy-rich pinecone seeds in forests up to 9,000 feet in elevation. Their numbers have dropped significantly since the 1900s, and it is estimated that there are fewer than 1,000 breeding pairs, now restricted to temperate forests in the Sierra Madre Occidental Mountains of northern Mexico. The thick-billed parrot is classified as Endangered by the International Union for Conservation of Nature (IUCN), BirdLife International, Mexico, and the U.S. Fish and Wildlife Service.

The thick-billed parrots’ boisterous calls can be heard nearly a mile away, which made them easy targets for hunters and illegal pet trade collectors in the past. Today, the pressing concerns are loss of nest sites due to logging, forest fires, and pine beetle infestations. Additionally, newly hatched chicks may face tiny bloodsucking parasites that infest the nest. It is thought that the increase in parasitic fly larvae that feed on defenseless chicks may be due to climate change and the resulting warmer temperatures and increased rainfall. Fortunately, San Diego Zoo Safari Park veterinary staff, along with international partners, have developed and applied effective, environmentally friendly treatments for some infested birds and their nest cavities, to improve survival of youngsters. “The small size of the remaining parrot populations, combined with the low number of breeding pairs in the forests in Mexico, have made thick-billed parrots particularly vulnerable to catastrophic events,” said James Sheppard, Ph.D., senior scientist, Recovery Ecology, San Diego Zoo Global (SDZG). Persistent timber harvesting across Mexico has led to only about 1 percent of historic old growth forests still standing, which is key habitat for thick-billed parrots. To increase nesting opportunities, researchers have added artificial nest boxes for the parrots to occupy. Installed high in trees, some have field cameras mounted nearby, to monitor activity. This revealed a surprising new nocturnal threat to the sleeping parrots in both natural and artificial nests: bobcats! Nighttime images show the stealthy cat climbing a tree trunk and reaching into the nest box, drawing out a bird, and climbing back down with it in its mouth. One image even shows an adult bobcat showing her kitten how it’s done. This has led to discussion about how to redesign nest boxes to better protect the parrots from bobcats. Each bird’s solar-powered transmitter costs $600 per year for the data download. Click here to make a deeply appreciated donation!

These gregarious, long-lived parrots feed and roost in flocks, often flying in a V formation, similar to geese, between feeding sites. They also migrate seasonally from their summer breeding grounds in Chihuahua, Mexico to wintering areas farther south. “In October, adult birds start flying in circles, swirling together in a whirlpool of green, before heading out,” said Yvette Kemp, senior hospital keeper, SDZG. Being fluent in Spanish, with ample animal expertise, she was an asset to the binational conservation team that traveled to Chihuahua last fall to attach GPS transmitters on 10 thick-billed parrots. SDZG, which has been involved with thick-billed parrot conservation for over a decade, partnered with the Arizona Fish and Wildlife Department, Mexico’s National Commission of Natural Protected Areas, and the conservation NGO Organización Vida Silvestre A.C. (OVIS) on this project, to “gain a clearer understanding of parrot migratory patterns, resource selection, and habitat use,” explained James. It was challenging, exciting, and rewarding. TEAMWORK
The bi-national, collaborative conservation efforts are shedding light on the range and ecology of the thick-billed parrot.

The group consisted of nine people from conservation organizations in the US and Mexico, including two agile tree climbers. The goal was to collect two parrots (an adult male and the largest chick) from the nest at five different sites, conduct a quick health check, document their weight and measurements, and carefully attach a nine-gram, $3,000 solar-powered transmitter to each bird. “We attach these small, lightweight transmitters to the parrots using a backpack harness that does not interfere with the bird’s flight, behaviors, or survival,” said James. MEASURED MOMENTS
Researchers carefully noted sizes and weights of the parrots before fitting them with solar-powered transmitters to track their seasonal movements. Flashing is put around the trunk of some nesting trees to deter (some) predators from accessing the nests.

The transmitters, which were funded by SDZG’s Wildlife Conservancy, send a signal to a network of satellites every five minutes, every other day, allowing the team to track the parrots’ movements, along with the altitude, temperature, and location. The team camped, getting permission from ranchers to pitch tents on their property. And it rained. A lot. They caught the adult parrots at midnight, gently lowering the birds to the ground in a backpack, then secured them in a crate for the night. They returned at sunrise to collect the chick. “Adult birds fly and forage all day, then sleep at night, so that’s when we can get them,” explained Yvette. “We catch the nearly fledged chicks in the morning, with the parents nearby, and it’s less stressful for them.” Yvette brought heavy-duty gloves to wear while handling the parrots, but the birds were so calm and docile she didn’t need them. HIGH IN THE TREES
The project greatly benefits from professional, intrepid tree climbers who gently collect young parrots from the nest and lower them to the ground. They also install flashing around some tree trunks to reduce predation on the parrots.

Some of the trees have flashing around the trunk a few feet below the nest box, to discourage predators. One of the courageous tree climbers was installing a sheet of flashing in the rain, and it slipped, slicing his finger to the bone. Being hours away from medical care, Yvette’s hospital keeper skills once again came into play, as she utilized everything in the first aid kit to bandage the wound and stabilize the patient for the long, bumpy “ambulance” ride to town.

Working in the field can be challenging, but happily, the team was able to deploy transmitters on four fully grown chicks and six adult birds in one week. Preliminary data show a single male parrot flying over 35 miles to an area researchers didn’t know the parrots frequented. Some parrots have flown an astonishing 430 miles in 2 months! “That’s the distance between San Diego and San Francisco,” said James. “Not bad for a pine-nut-munching parrot!” The high-quality data reveal tagged parrots moving south, and show the migratory routes they are taking. Understanding the spatial behavior of thick-billed parrots will help land managers protect the best year-round habitat, so the parrots’ raucous calls will echo across the sky islands for a long time to come. 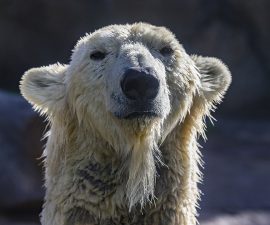 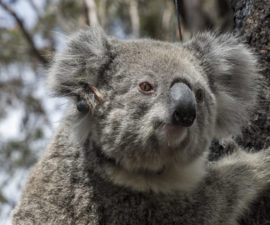