One of the questions we get asked most frequently about our polar bears is: “Isn’t it too hot in San Diego to have polar bears?” This is a very legitimate question. There are quite a few things we do to make sure our three bears—Chinook, Kalluk and Tatqiq—are as comfortable as possible here in sunny and warm Southern California.

Our polar bear exhibit is designed to represent what the bears’ Arctic home looks like during the summer months. In many areas of polar bear habitat, the sea ice naturally recedes completely over the summer. During this time, polar bears can spend up to four months without eating, as they rely on the sea ice as a hunting platform to catch food. Without ice, they can’t hunt much and they basically fast throughout the summer. A typical tundra scene in October in the polar bears’ native habitat.

One of the biggest factors in how our bears thrive here in San Diego has to do with their diet. Up in the Arctic, a polar bear’s diet consists of one main food source: ringed seals. More specifically, when a bear catches a seal, it mainly eats just the fat off of its prey. This rich diet allows polar bears to build up a layer of fat (known as blubber) under their skin that can be up to four inches thick that insulates them against the brutally cold Arctic winters.

Obviously, our three bears don’t need much insulation here in San Diego. So we feed them foods with much fewer calories, which in turn lessens the amount of blubber they have on their bodies, allowing them to naturally stay cooler. The meat portion of their diet is made up of beef and smelt (a small type of fish), but a large portion of what they eat every day actually consists of fruits and veggies. Snacks at the ready when she wakes from her nap. Keepers also put out palm fronds, which the bears enjoy chewing, rolling, and laying on.

This may sound strange, but these foods allow our bears to eat and feel full, without gaining a lot of extra weight. Carrots, yams, grapes, melons, and romaine lettuce (a particular favorite of Kalluk) are all part of the food we offer them daily. There are lots of other ways for Chinook, Kalluk, and Tatqiq to stay cool. Large shade structures in their home provide lots of shady areas. However, you may often see a bear lying in the sun, even when it’s warm outside. Tatqiq is a big fan of the sun and can often be seen sleeping out on exhibit in the full sunshine. Sometimes, if her snoozing spot becomes shady, she’ll even move to be in the sun. The bears have plenty of shade options. (Note: the dark patch on this bear’s forearm is where the fur was shaved for a vet check—blood draw, etc. Polar bear skin is black.)

Sometimes, on warmer days, the bears just hang out in the pool, relaxing and cooling off. We all know the feeling!

The water in the bears’ large, 130,000-gallon pool runs through a chiller to keep the temperature at a brisk 55 to 60 degrees Fahrenheit. We also give them the option of coming into their air-conditioned holding area whenever they want. Kalluk and Chinook are big fans of enjoying an afternoon nap directly under the A/C vent whenever the outside temperatures rise above 75 degrees Fahrenheit.

We also provide the bears with icy treats like “fishsicles” and peanut butter popsicles. And thanks to the generosity of some amazing donors, our polar bears have access to snow 365 days per year! Snow is a regular treat, thanks to machines gifted by generous donors.

Two snow machines drop snow directly into the rear portion of the exhibit, allowing them to engage in many typical polar bear behaviors: rolling, sliding, or simply lounging in a large snow pile. Providing our polar bears with the ability to express natural behavior is our ultimate goal. Be sure to stop by Polar Bear Plunge, or watch the bears on our live-streaming Polar Cam to see the range of daily experiences we provide to ensure they have the best welfare possible.

Becky Wolf is a senior keeper at the San Diego Zoo. 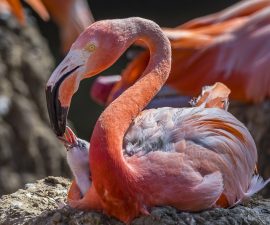 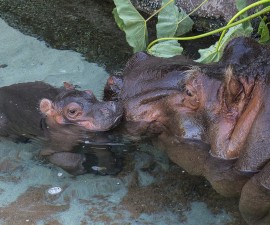 There were only four keepers present when Funani, the San …
April 6, 2015 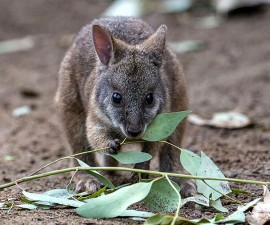