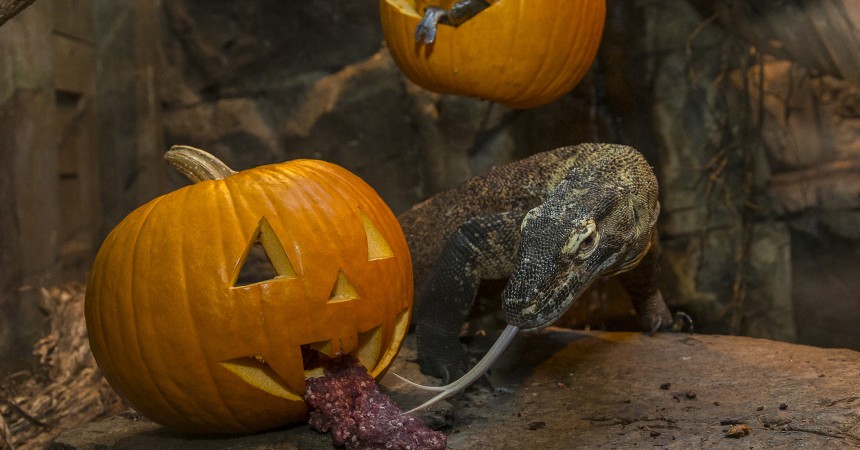 Animal care staff at the San Diego Zoo got into the Halloween spirit this morning, with carved pumpkins for the world’s largest lizard. There were no candles to light the jack-o’-lanterns, but keepers filled the gourds with trout and ground elk meat drizzled with fish blood, for a 4-year-old Komodo dragon. Ratu, which means “queen” in the Indonesian language, could see the orange gourds, but it was the action of flicking her tongue that allowed her to locate the meat, which is part of her daily diet. Putting her food inside the jack-o’-lanterns encourages the animal’s natural behavior of scavenging and foraging.

Komodo dragons are carnivores that detect odors by sending their long, yellow forked tongue to sample the air and then delivering it to the roof of the mouth, making contact with an auxiliary olfactory sense organ called the Jacobson’s organ. The chemical analyzers in that organ are able to “smell” airborne molecules—and if the concentration present on the left tongue tip is higher than that sampled from the right, the Komodo dragon will follow the stronger scent to the food.

The Komodo dragon is the largest lizard in the world and is the apex, or top predator in its native range on Komodo, Rinca and Flores islands in Indonesia. They are known to scavenge from carcasses or stalk animals ranging in size from small rodents to large water buffalo. Komodo dragons can detect carrion from an estimated 2.5 miles away, and will actively seek it out. Its jaws, muscles and throat allow a Komodo dragon to swallow huge chunks of meat rapidly, while its stomach expands easily, enabling an adult to consume up to 80 percent of its own body weight in a single meal. 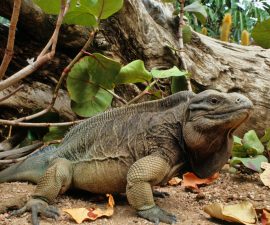 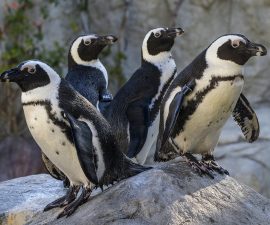