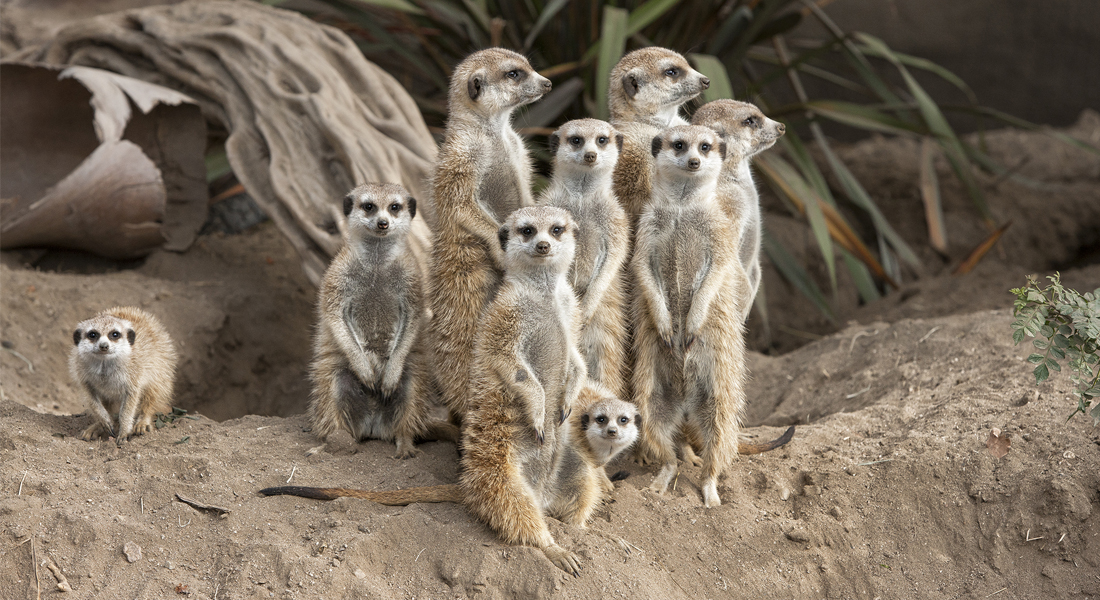 More Than Merely Anything

For many people, meerkat watching is a workout for the eyes. The squirrel-sized, tawny animals blend in well with their dun-colored surroundings, so spotting one can be a challenge. Keeping them in view is another matter. At times, they are a boisterous blur as they scurry in search of food and duck in and out of their burrows. Yet, patience pays off, and by watching the meerkat mobs at the Zoo and the Safari Park, a fascinating world unfolds.

Highly social, meerkats Suricata suricatta are a type of mongoose. They live in groups—called a mob or a band—of about 20 animals. Occasionally, a few mobs gather into a supergroup. Each group has its own territory, with boundaries marked by dung and scent marks.

Patrolling the perimeter of their area is as important a daily task as foraging for food, because neighboring meerkat groups constantly try to take territory from one another. Mob-to-mob confrontations usually involve a lot of posturing and even tooth-to-tooth battle. These scrappy creatures are just as fierce when confronted by a predator, be it a snake or something larger. With amazing synchronicity, the group surges forward, jumping and hissing with teeth bared.

This show of force and unity often works to confuse and/or intimidate a predator long enough to make it change its mind. Yet meerkats, like so many animals, benefit most from avoiding predators in the first place—and they have a security screening system to do just that! While mob members rest, wrestle, or forage, there is always at least one individual standing sentry—in the most literal interpretation of the phrase. LIKE A KICKSTAND
To get a better view of the surroundings, meerkats stand tall, using their sturdy tail to help them stay upright.

One of the most recognizable (and photographed!) meerkat postures is the animal standing upright on two legs. The sentry moves its head and eyes, constantly scanning the horizon and the sky for potential danger. A shadow on the ground, a dark form overhead, or a movement hundreds of yards away causes the “watchkat” to give an alarm bark or a whistle (depending on the threat—different calls mean different things). The rest of the group stops whatever they are doing and stretches up to get a look. Another vocalization sends the band scrambling into the safety of their burrows, or gathers the troops to prepare to fight.

With their long claws and energetic nature, meerkats are excellent diggers—they often dig to uncover insects and edible tubers. When it comes to a burrow, however, they often take shelter in holes dug by other animals. But they will take on home improvement by adding tunnels, “rooms,” and entrances/exits. They also maintain a number of burrow locations throughout their territory. This helps ensure that they have a safe spot to escape to while they’re out foraging or patrolling their territory. The beauty of a burrow goes beyond a hiding place. Since temperatures underground remain fairly constant, an underground lair helps these animals escape extreme heat during the day and cold at night out on the savanna. SOAKING IT ALL IN
In most animals, a “belly-up” position is a vulnerable one. Yet meerkats strike this pose regularly to make the most of the sun’s warming rays.

Native to hot, arid habitats in sub-Saharan Africa, meerkats have a number of adaptations for keeping cool. They have a rather slow metabolism for a carnivore of their size, and their small size helps them beat the heat in the daytime when they are most active. However, it makes them vulnerable to the cool temperatures of evening and early morning. Which leads to one of this species’ most endearing behaviors: the daily sunbath! UNITED FOR THE FUTURE
Alert to their surroundings, meerkats scramble into a huddle when alerted by the chirp of the sentry.

Meerkats spend the dark hours snuggled in their underground burrows. As they emerge after sunrise, the wary animals rise up on their hind legs to scan their surroundings. Then, they settle in to cast off the morning chill. Each meerkat finds a spot and faces the rising sun. With their long forearms draped over a sparsely furred belly, they lie back with legs akimbo and chin up to bask in the sun. The dark skin of their stomach absorbs the toasty rays, and the warmth circulates through their body.

Adding to the Mix

Burrows are also a boon for keeping the youngest, most vulnerable members of the group safe. Meerkat pups are born in nesting chambers within the underground labyrinth of a meerkat colony. Pups are often born during the rainy season, when food is so plentiful that mothers are well-fed enough to produce high-quality milk.

Blind and mostly hairless at birth, newborn meerkat pups stay snug and safe in the burrow for about their first four weeks of life. During that time, their eyes and ears open and they grow fur to protect them from the blazing sun. Wriggling and wrestling with each other, they build strength and coordination, and then they emerge from the burrow. A WHOLE NEW WORLD
When pups finally emerge from the den, they stay close to mom—and other adults—as they learn the ropes topside.

Joining the world above ground, they begin eating insects and bits of small vertebrates brought to them by their mother or another adult, as caring for the young is a community effort. Eventually, the youngsters are taught what to eat and how to catch it. They follow along on foraging expeditions. An adult might injure a lizard or large insect to let the pups practice tackling it. By the age of nine weeks, the youngsters can hunt for themselves.

For many people, just one look at a meerkat’s sharp face and keen expression is enough to declare the creature “cute.” While their features are impossible to ignore, there is much more to these tiny, tenacious denizens of savanna and desert. Stop and do some meerkat watching at the Zoo or the Safari Park. You may find them peacefully sunbathing, intently digging, foraging for food, or simply socializing by nuzzling or playing. No matter what they’re doing, they’re fascinating to observe. And be sure to look for the sentry—it will be watching for you, too. 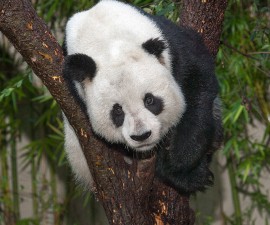