There's no stopping this fast cat

From his familiar crate, Ruuxa the cheetah watches his best friend Raina, a domestic dog, in hot pursuit of a small zebra toy. Once Raina catches her “prey,” it’s Ruuxa’s turn. The door to his crate opens and he literally hits the ground running. In typical cheetah fashion, he pours everything he has into the chase. Under any circumstances, a cheetah racing at top speed is a sight to behold; but in Ruuxa’s case, it’s even more astonishing—he is a cheetah that wasn’t supposed to be able to run.

Radiographs revealed an abnormality that is common in cheetahs and in large-breed dogs—the growth plate in the ulna had stopped growing before that of the radius bone. Left untreated, the condition can cause pain and mobility problems later in life. Surgery was performed to correct the deformity, but later it was discovered that Ruuxa also had chondrodysplasia, a genetic condition resulting in dwarfism in his front legs.

“The surgery helped the bowing, but the vets told us that because of the dwarfism, he would not likely be able to run,” said Janet Rose-Hinostra, animal training supervisor at the Park. However, Ruuxa didn’t hear that diagnosis. Without knowing he wasn’t supposed to be able to run, he began to do it anyway—surprising trainers and vets alike. “He’s very athletic,” Janet said. “We never asked him to run, but once he started to, we never told him no.”

Monitoring him carefully, the trainers started Ruuxa in the training and conditioning program that leads to a sprint at Cheetah Run.

Like the other Cheetah Run athletes, Ruuxa’s training began with him pursuing a lure on a lunge pole. On the savannas of Africa, cheetah cubs spend up to two years with their mother, following her as she stalks and pursues prey. As they grow stronger and faster they eventually join her in the chase.

At the Park, trainers engage the chasing instinct by manipulating a lure on the end of a lunge line. As with domestic cats, catching the “prey” is rewarding in itself. Trainers move the lure in a large circle and change its direction to foster the balance and lightning-fast reaction times a “hunting” cheetah needs to establish.

After about one to two years of physical conditioning, the speedster-in-training is introduced to the track at Cheetah Run. The next steps establish the routine of participating in the daily demonstration. For a young cat like Ruuxa, that means learning when it’s playtime versus “focus” time.

Growing up, Ruuxa and Raina were often taken to a grassy area at the Park where they would romp. Because of this, Janet explained, “to Ruuxa, the feel of grass under his paws means playtime. One of the things he’s been learning is that the Cheetah Run area—and its grass—is for a different activity.”

Our cheetahs typically shave three to five seconds off their 100-meter run in the first year.

The Chase Is On

Generally, when a cheetah begins chasing the lure at Cheetah Run, it begins at a slower speed than the more experienced, older cats. Ruuxa’s trainers took extra care with him at this stage by obtaining a slower-speed mechanism (used for training dogs) that wouldn’t overextend him. “We take our cues from the animals,” said Janet. “We want them to progress at their own pace, and because of his challenging anatomy, we were happy to make special accommodations for Ruuxa to succeed. However, it’s clear that it was his choice to ‘play the chase game’ and utilize impressive speeds like any other cheetah.”

In their natural habitat, cheetahs often hunt down prey only to have it taken away by lions or hyenas, as the cheetah recovers from the intense effort of the chase. At Cheetah Run, the cats are trained to pursue the lure, but once the end of the run is reached, the cheetah bypasses the decoy for a pan of meat. On a couple of Ruuxa’s practice runs, he tackled the toy and didn’t want to give it up. On the savanna, a lion or hyena wouldn’t give the cat a choice, but at the Park, choice is king. As Ruuxa mouthed his “prize,” his trainer tapped the metal pan of meat nearby. After a moment, Ruuxa made his (wise) choice, left the lure behind, and enjoyed the treasure in his food pan with gusto.

Ruuxa and Raina have graduated and are official Cheetah Run participants. The dynamic duo will be the ones to watch as they grow in size, strength, and skill. Plan to join the crowd in cheering them on! 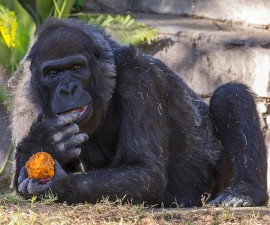 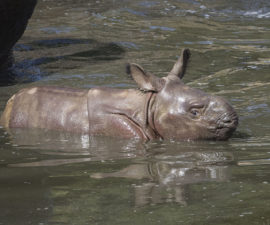