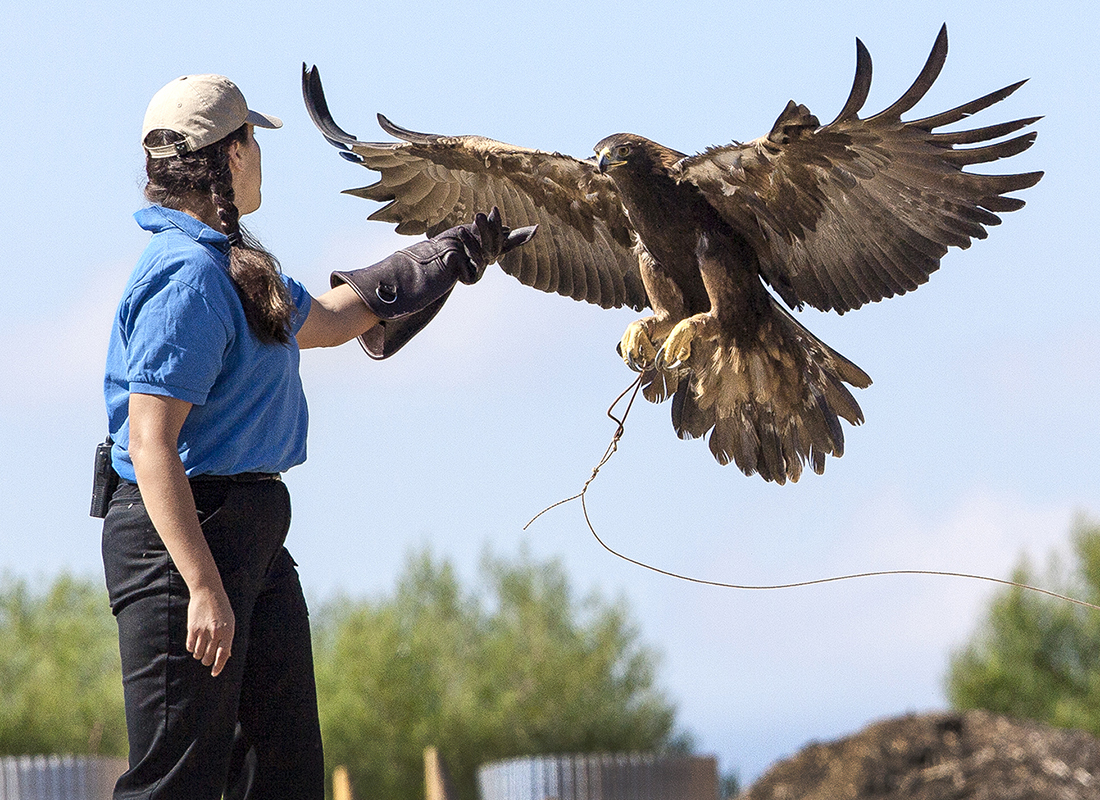 For a wild bird, even the friendliest skies can suddenly turn turbulent. Obstacles such as injury, illness, or human interference can cause an unexpected change in life’s route—and it’s often not in the right direction. But for some fortunate fliers, like the rescued ambassadors at the San Diego Zoo and Safari Park, plotting a new course can help their wild brethren by deepening the understanding and respect that people have for nature. With her 6-foot wingspan, intense gaze, and confident personality, Tonka, the Safari Park’s 18-year-old golden eagle, is worth her weight (9 pounds!) in gold when it comes to impressing visitors. Her story was almost over before it started, however. She was found injured as a fledgling near a trail in the Angeles National Forest in 1998. “We believe she fell out of a cliffside nest,” says Janet Rose-Hinostroza, an animal training supervisor at the Safari Park. “She was found with a broken hip, and her immature plumage meant she was young.” The hiker who discovered her contacted a park ranger, and Tonka was taken to a wildlife rehabilitation center. FLY LIKE AN EAGLE
Tonka makes an impression on Park guests, both through her flight prowess and inspirational story.

She recovered completely from her injury, but became imprinted on humans in the process, making her unsuitable for re-release into the wild. “She considers people ‘mouse dispensers,’” Janet explains. “She can’t be returned to the forest, because if she got too hungry or thirsty, she would seek out people for help. That’s not a good situation.”

Due to her status as a protected native species, the California Department of Fish and Wildlife keeps close tabs on Tonka. They check in each year to see what she is contributing as an ambassador for her species, and to ensure she has a great quality of life. In the US, kestrels are found in a range of habitats, including urban centers. Watch for them in your neighborhood.

The kestrel, or sparrow hawk, is the smallest falcon in the US—but don’t tell that to Safari Park ambassador Rusty. As far as he’s concerned, he’s large and in charge. In 2013, Rusty landed on the shoulder of a horseback rider in Julian, and proceeded to accompany her all the way back to her home. Representatives from the U.S. Fish and Wildlife Service were contacted, and once it was clear how imprinted the little bird was, they contacted the Safari Park.

Annette Russell, a lead animal trainer at the Park, works with Rusty and believes his species was a clue to his potential origins. “Kestrels are usually the first type of bird a beginning falconer will use,” Annette says. “They may be small, less than one-quarter of a pound, but they’re strong little hunters—they go after bugs, mice, and lizards.”

Rusty is calm and collected during his appearances at the Safari Park, fluffing his feathers comfortably, and vocalizing occasionally to let people know he’s watching them­—and, as Annette says, to ask for his favorite bite-size treat, “meese’s pieces.” That’s exactly what it sounds like, and Rusty thinks they’re delicious.

Not only is Tony Hawk strong-willed, he’s also incredibly lucky. After fledging in the wild in 2009, the young red-tailed hawk contracted West Nile virus; and when a passerby discovered him, he was assumed to be dead. As workers at a wildlife rehab center prepared to put him in the freezer to await a necropsy, Tony Hawk’s eyelids fluttered. Staff realized he was still alive and rushed him to treatment. “It’s amazing he survived,” says Kim Caldwell, an animal training supervisor at the Safari Park. “He was so sick. He lived at the clinic for months until he got stronger.”

But West Nile virus, along with causing weakness and neurological damage, can affect eyesight. Tony’s depth perception was compromised, and he has vision problems. He is otherwise healthy, but not suited for life in the wild. “He wouldn’t be able to hunt, so releasing him wasn’t an option. He wouldn’t have survived,” Kim says.

Because of his initial interactions with humans, Tony wasn’t all that excited about his early training. “For him, being handled meant medical treatment,” Kim explains. “Initially, he would just play dead. We had to build up trust with him.” Tony Hawk now takes part in the Safari Park’s Frequent Flyers bird show, where he proudly sits on his trainer’s gloved hand, letting guests appreciate just how majestic hawks are. Kim notes that Tony Hawk’s story is an important conservation lesson. “He’s living proof that West Nile virus is a serious threat. He’s lucky he was found. He helps us educate people about the virus,” Kim says. The “Eyes” Have It

For a western screech owl like the Zoo’s Ojos, a wing injury means you’re grounded. “She came to us from Project Wildlife in 1998,” explains Athena Wilson, a senior keeper at the Zoo. “Being unable to fly, a small bird of prey becomes prey for larger birds and other animals.” At first, Ojos was wary of hopping onto a keeper’s glove, and an audience made her nervous. “Once we formed a bond and she realized she could choose to participate and receive tasty crickets, she was fine,” Athena explains. “She takes part in behind-the-scenes experiences, animal presentations, our summer camp programs, and special events.”

With Ojos, as with all our ambassadors, the the most important factor is the animal’s comfort. “We’re very sensitive to their need to feel safe. She’s a small bird of prey; she feels like she has to always watch her back,” Athena says. “If she gets uncomfortable, we take her inside.” Fortunately, all of these avian ambassadors were discovered by people who knew what to do when finding a wild animal in distress. “They contacted a qualified rehabilitation organization,” Janet says. “The animals’ special—and sometimes specific—needs make it vital that they get appropriate attention.” Kim couldn’t agree more. “If someone tries to keep and raise a hawk, for example, the bird can suffer. The wrong diet can give them rickets. You need to let the experts handle it.”

These birds also share an important role in spreading the word about conservation. “When we’re presenting Tony Hawk, people get an up-close look at what can happen when standing water attracts mosquitoes, which carry and transmit West Nile virus,” Kim says. And by sharing Ojos’ story, Athena notes, they can explain how it’s possible for humans to be indirectly responsible for injuries. “When you toss even biodegradable ‘trash,’ like an apple core, out the car window, it can attract small rodents to a roadside area,” Athena says. “Then any birds hunting those rodents can get hit. Roadkill left on the side of the road can cause the same problems.” THE “EYES” HAVE IT
“Who” knows what a charismatic bird Ojos the western screech owl is? Kelly Lee, a senior keeper in the Children’s Zoo senior keeper, for one!

Athena adds that meeting these charismatic creatures helps people develop better conservation habits of their own. “Someone might use pesticides or insecticides in their yards, but then birds eat those poisoned bugs,” she says. “The same can happen with the use of rodent poison. By putting up owl boxes, you can attract owls to your yard, and you’ll have your own safe, natural rodent control. It’s better for everyone.” With that type of insight, and a little effort, we can help put wildlife—winged and otherwise—back on the right path. 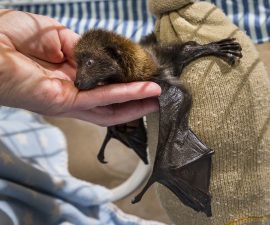 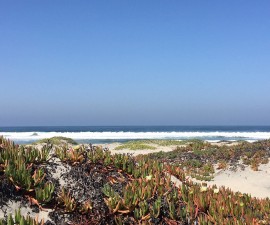 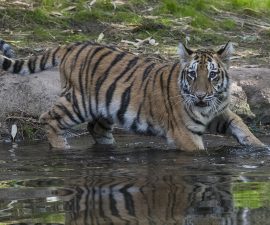