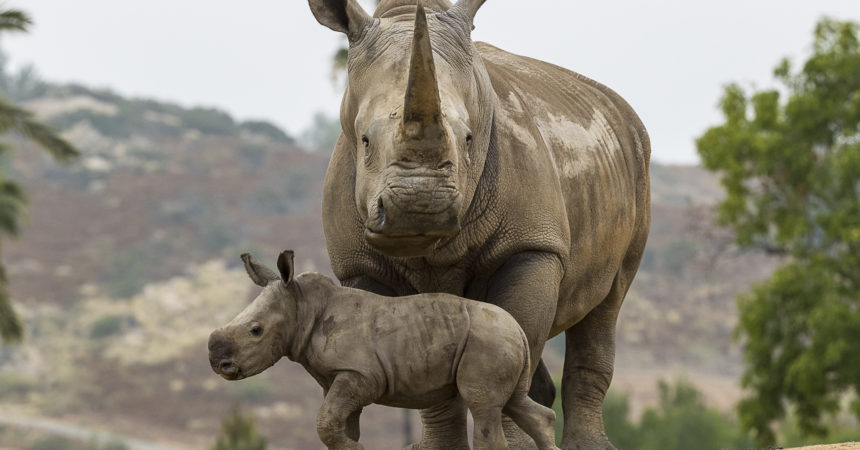 From burrowing owls in Southern California to giraffes in Kenya; light-as-a-feather butterflies to SUV-weight rhinos, so many species around the world are threatened with extinction. Too many. The task of stopping their slide to “nevermore” can seem an audacious goal, but when people come together, amazing things happen! All of us at San Diego Zoo Global (SDZG) (and our dedicated supporters) beat the drum and take the steps to end extinction every day. Friday, May 17 is Endangered Species Day, when we join other people around the world in getting the message out—and this year everyone is invited to join us in sharing your heart—and hope—for rhinos.

While their heft and horns have always been admired—sometimes for the wrong reason—today many people are falling in love all over again with these “chubby unicorns.” And there’s certainly much to marvel over! Rhinos are the second largest land mammal, they have superb hearing (making up for poor vision), and of course, they have that marvelous multi-use tool, the horn (made of keratin, like our fingernails).

Of the five recognized rhinoceros species, the northern white rhino, the Javan rhino, and the Sumatran rhino are listed as critically endangered; the black rhino is listed as vulnerable; and only one—the southern white rhino—is listed as near threatened on the International Union for Conservation of Nature’s (IUCN) Red List of Threatened Species.

Rhinos are very important to the ecosystems in which they reside. For example, Asian greater one-horned rhinos live in humid, swampy, tall-grass habitats. These large herbivores graze on the grass, which helps to maintain it and increases plant diversity and grazing areas for other animals. Rhinos digest large volumes of plant material and disperse the seeds in their dung, thus aiding the health and maintenance of vegetation in their habitat. As rhinos disappear, their absence impacts other species of birds, reptiles, mammals, and plants. Other rhino species play similar roles in their African and Asian habitats.

Decades of rampant poaching have brought most of these gentle giants to the brink of extinction—three are killed every day. And with only two left on the entire planet, the northern white rhino is the most endangered animal on Earth.

With you by our side, we’re leading the fight to save these magnificent animals. Through cutting-edge science, world-class animal care, and a one-of-a-kind surrogacy program, rhinos are on the rebound.

If you love wildlife, join our global Endangered Species Day campaign. Nearly 1 million species are vulnerable to extinction and need our help. 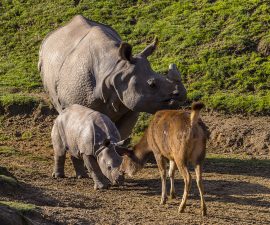