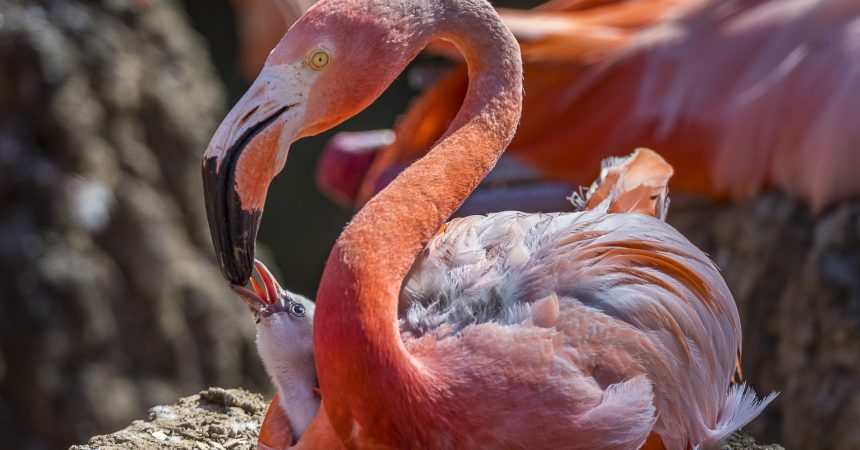 The San Diego Zoo’s unofficial greeters at the Flamingo Lagoon have added 13 new, fluffy chicks to their vibrant flock—and all but one are being raised by “foster parents.” The 12 new foster chicks are greater flamingos, which are closely related to the American flamingos residing at the Zoo’s Front Street habitat. The chicks were hatched by American flamingos from eggs that were laid at the San Diego Zoo Safari Park, which is home to the largest greater flamingo flock in managed care in the world.

“We have a really great environment at the Zoo that allows guests to observe flamingo parents raising their chicks from a very early age,” said Dave Rimlinger, curator of birds at the San Diego Zoo. “The breeding success with our greater flamingo flock at the Safari Park has provided a unique opportunity for the adult birds at the Zoo, and we’re very pleased with their parenting skills.”

Since most of the American flamingo pairs residing in the Zoo’s Front Street habitat were not recommended to breed by the Association of Zoos and Aquariums cooperatively managed Species Survival Plan (SSP), animal care staff decided to allow these adult birds to foster greater flamingo chicks. In a few years, when the fostered birds are old enough, they will eventually create a separate greater flamingo flock at the Zoo.

Unlike the blush-colored adults, flamingo chicks are covered in whitish-gray plumage. After leaving their nest, the chicks flock together in large groups called crèches. Both the male and female will look after their chick and provide it with proper nutrition until it can feed on its own. The flamingo’s pink or reddish color comes from the rich sources of carotenoid pigments in the algae and small crustaceans the birds eat. At the San Diego Zoo and the San Diego Zoo Safari Park, the flamingos are fed a special pellet diet that is made for zoo flamingos. This food has all the nutrients the flamingos need and a pigment that helps keep them “in the pink.” American and greater flamingos are both listed as species of Least Concern on the International Union for Conservation of Nature (IUCN) Red List of Threatened Species. However, as with many wild species, the threat of habitat loss due to development could lead to trouble for populations in the future.

Visitors to the San Diego Zoo can see the new chicks on Front Street. One way to tell the species apart is by looking at the color of their legs—American flamingos have pink legs while greater flamingo chicks have black legs. 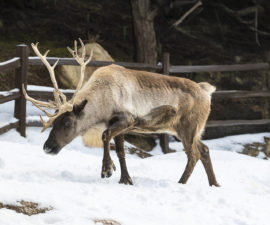 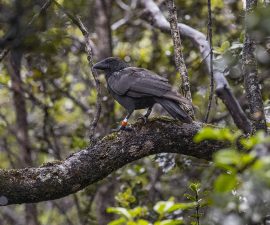