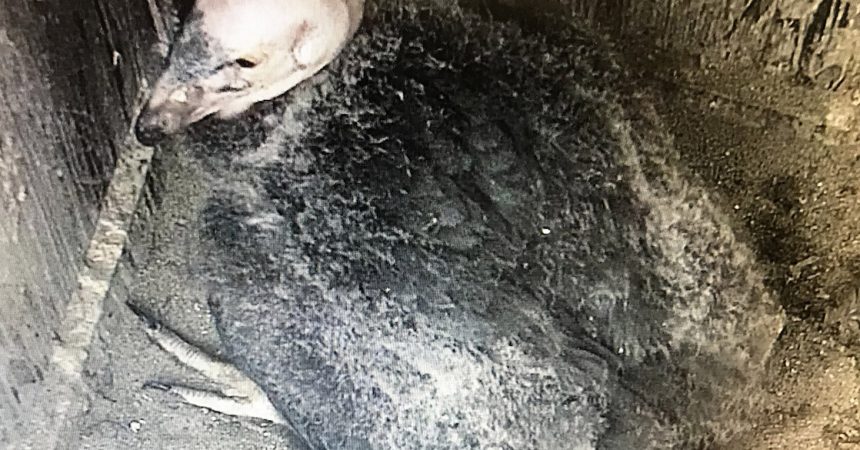 The results are in: Kitwon (pronounced “KEET-won”), our California condor chick being raised on Condor Cam at the San Diego Zoo Safari Park is a female!

She is now over 85 days old and is starting to get her “big bird” feathers! As many of our regular viewers have noticed, her flight feathers are growing in. Some of the first feathers that start to grow are the wing feathers. It is easy to see the feathers growing through the chick’s down – the down feathers are gray, but the new flight feathers are black. The long feathers that grow from the tip of the wing are called “primary feathers” and the feathers from the wrist to the armpit are “secondary feathers.” Primary and secondary feathers are the giant feathers that make the California condor’s wing so large and impressive. An adult can have a wingspan of up to nine and a half feet! We are estimating our chick’s wingspan to be around five feet right now—between the size of a red-tailed hawk and a bald eagle. Her tail feathers are also starting to grow. They’re a little harder to see on camera, but you should be able to spot them soon. After the wing and tail feathers fill in, the feathers on Kitwon’s back will start to grow, as well as the small feathers on the top of the wing (called “coverts”). Even though many new, black feathers will be covering parts of her body, Kitwon will still have lots of gray down showing, making it easy to differentiate her from her parents. Eventually, her light-colored skin will turn dark gray or black and be covered with fine, fuzzy feathers, but this won’t happen until well after she leaves the nest. Her skin will stay dark until she reaches maturity at six years and it turns pink-orange, just like her parents, Sisquoc and Shatash. Kitwon lounging in the nest box with her father, Sisquoc (pink head).

Kitwon had her second health exam on June 14, during which our veterinary staff were able to administer her second, and final, West Nile virus inoculation. A blood sample was obtained and she weighed in at 15 pounds (6.85 kilograms), over half of her projected adult weight. Even though our little girl is getting big, she still has room to grow!

With her new, long wing feathers, Kitwon will be exercising her wings more often in the form of strong flapping. You will notice that, as her wings gain more surface area, she will be able to lift her body off of the nest floor. She won’t be able to fly, but she’ll be a step closer. Plus, her legs will be getting stronger and more coordinated, allowing her to jump higher. When she is between 90 and 110 days old (June 28 to July 18), we expect her to be able to jump up onto the entry barrier of the nest box. It could be earlier or later, as each chick develops at a different rate. The barrier is 18 inches tall, so if she can jump up onto it, it’s not a long fall if she slips. Usually, the chicks are strong enough to jump down without slipping. Hopping up and down from the nest barrier exercises Kitwon’s wings and perching on it helps improve her balance. She may even sleep on top of the barrier!

From the barrier, Kitwon will be able to hop back into her nest, if she wants to, or she can hop into the adjoining roost area, of which most can be viewed via the Condor Cam. While out in the roost, she can rest or sleep in the shade, perch with her parents (if they are not perched out in the flight pen), or step out to the roost ledge to soak up the sun’s rays for the first time. The ledge is about eight feet above the ground—high enough to make the parents feel comfortable and secure in their nest, but not as high as a condor nest in the wild. Kitwon may get near the edge, but she will be cautious in doing so, so she doesn’t teeter off. It is natural for condor chicks to explore and exercise on the edge of their nest cavities. Rarely do they fall out.

Kitwon still has plenty of time before she will fledge, or leave the nest, so please continue to enjoy your time with her. We appreciate all of your comments and support! 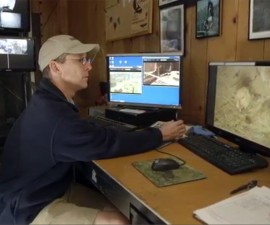 Today, cameras at the condor breeding facility at the San …
February 23, 2016 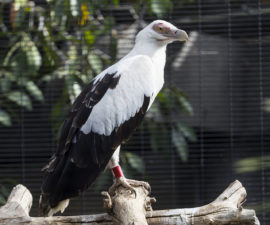