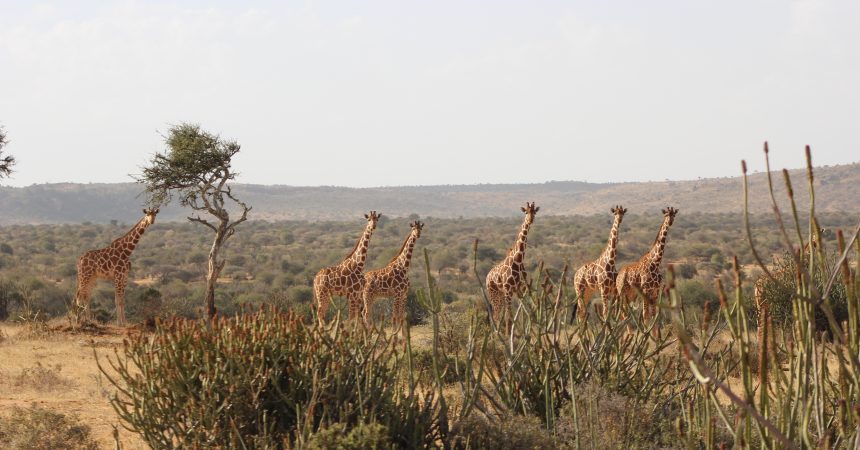 I recently joined San Diego Zoo Global’s reticulated giraffe conservation project. I started volunteering with the project in September, and am now working full time on the project.

My role mainly consists of using a computer programming software called R, where I am able to analyze data sets ranging from camera trap image classifications to mapping giraffe aerial survey data. I was even able to attend our team’s most recent trip to visit our field sites in northern Kenya!

While we were there, we participated in the Great Grevy’s Rally, and wow, what an experience it was! The Great Grevy’s Rally (GGR), organized by Grevy’s Zebra Trust, is an open census where everyone from students to Ph.D. professionals, to Kenyan and international volunteers can take part in a ground count of Grevy’s zebras throughout northern Kenya. The teams spend as much time as possible driving routes in their designated areas over the course of two days, and are trained on how to photograph and record all Grevy’s zebras that are encountered.

This year the GGR was particularly exciting because reticulated giraffes were added to the census, so both Grevy’s zebras and giraffes were counted and photographed. I, along with San Diego Zoo Global colleagues and rally teammates Jenna, Lexson, and Ambrose, lead collaborative conservation and research programs on reticulated giraffes in northern Kenya. In addition to our team, there were two other San Diego Zoo Global teams participating in the Rally at other sites. Quite a scene: A tower of giraffes, a herd of zebras, and a pod of hippos!

Both species of zebra and giraffe have had significant declines in recent years due to illegal poaching and habitat loss/degradation. With Grevy’s zebra status listed as Endangered, and reticulated giraffe listed as Vulnerable, it is now more important than ever to monitor the numbers of these species in Kenya, and participating in GGR is the perfect way to do so.

We set out from headquarters on Loisaba Conservancy, a 56,000-acre wildlife conservancy located in Laikipia, northern Kenya, at around 8 a.m. Our first day out was incredible—what started off as a slow morning rapidly turned into a wealth of biodiversity. We came across our first herd of zebras around 11 a.m., four of them being Grevy’s. I was surprised to see two different zebra species—plains zebras Equus quagga and Grevy’s zebras Equus grevyi—in the same herd. However, Lexson told me that it is quite common to see them together.

The first step in a successful Great Grevy’s Rally is being able to differentiate between these two species of zebra. The main difference is their coat pattern and their ears: plains zebras have thick, slanted stripes and more narrow, pointed ears, while Grevy’s zebras have thin, relatively vertical stripes, a white unstriped belly, and big, round teddy-bear-like ears. The images below show a Grevy’s zebra and a plains zebra: can you tell which is which? Plains zebras have thick, slanted stripes that reach under the belly. Another extremely important part of GGR is making sure you’re able to capture a good right-side image of the animal. This is used for identifying individuals through a technology called Image-Based Ecological Information System (IBEIS). Each individual giraffe and zebra has its own unique pattern, similar to a fingerprint, which can be loaded through this software in order to determine an accurate count of the number of individuals in the survey areas. This technology eliminates duplicate counts that may have been made of the same individual at different times of the day or the following day. It also allows researchers to keep a database of known, identified individuals, so they can see how they are doing over time.

The total count for our first day of the rally was 71 Grevy’s zebras and 17 reticulated giraffes. Driving around all day on pristine and conserved land, you’re guaranteed to see some pretty incredible animals in addition to the zebras and giraffes. We even came across a pride of seven lions and a pod of hippos! At one point, we had hippos, zebras, giraffes, and elephants all in one image frame.

Any great day in the field must come to a close with some cold sodas in a prime spot for a sundowner. We met up with the other GGR team based at Loisaba, and we exchanged stories about the day as we enjoyed the view of the big, fiery sun setting over the hill.

We set out a bit earlier the second day, eager to see what excitement lay ahead. We immediately came across a herd of giraffes, and were able to get great right-side images of them. While Grevy’s zebras usually remain relatively still when a vehicle pulls up, giraffes can often be quite shy and retreat behind trees, making it difficult to capture good images of them.

The highlight of the day was spotting one of the giraffes that is fitted with one of our satellite tracking units! Part of the research we conduct includes analyzing the movement data that we receive from these units in order to learn more about the habitat range and preferences of giraffes in this area. The units are solar powered and record the giraffe’s location every hour, and send the location data up to a satellite once a day, where we can then download the data.

It was incredible to see our study animal in such a large herd! I was so shocked at how difficult the unit was to see on its ossicone. Lexson was pointing right at it, and I still had to use the zoom lens on my camera in order to tell which giraffe had the GPS unit. (Can you tell from the main title image [at the top] which one it is? It’s the third giraffe from the right.)

By the end of the day, we had counted 80 Grevy’s zebras and 23 reticulated giraffes. It was an extremely successful GGR, and we are looking forward to receiving the final counts from the Grevy’s Zebra Trust at their gala in June. Below is an example of the kind of data analysis and movement mapping we can accomplish with the information gathered by the satellite GPS units attached to giraffe ossicones. Once we have more accurate counts of the population of reticulated giraffes in northern Kenya, we will be able to make leaps and bounds in both our research and conservation of this species! You can learn more about the Great Grevy’s Rally here, and get details about the reticulated giraffe project here. The latest news and results in our Reticulated Giraffe Storymap are available here. You can also help with our research from your own computer or smart device by helping us classify wildlife trail camera images from northern Kenya. It’s fun, easy, and even slightly addictive! Join our citizen scientist team at wildwatchkenya.org.

Nikki Egna is a researcher with the San Diego Zoo Institute for Conservation Research. 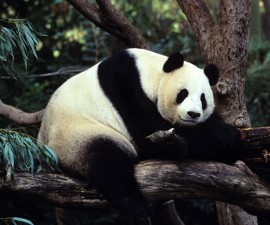 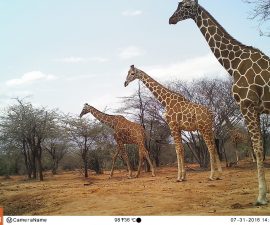 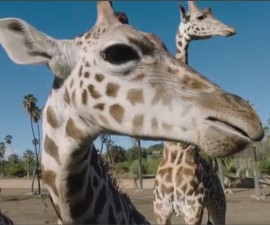