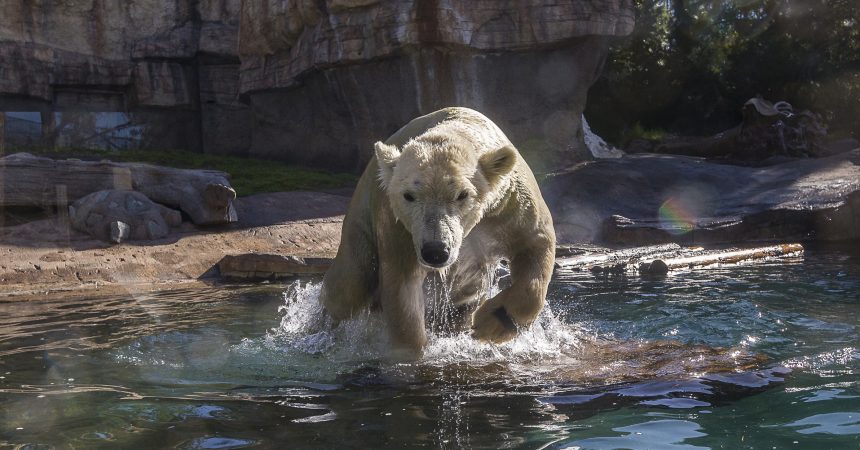 Tatqiq, a 16-year-old female polar bear at the San Diego Zoo, took huge strides for conservation last month when she voluntarily walked on a treadmill for scientific research. The 580-pound bear’s participation allowed scientists to collect important data for a U.S. Geological Survey (USGS) project studying the energy demands that bears face in the Arctic. Biologists from the USGS, the University of California, Santa Cruz and the San Diego Zoo hope to find out how much energy polar bears use while resting, walking and doing what it takes to survive in their dynamic habitat. Information gained from this study will allow researchers to better understand the impacts of climate change on wild bears, as their sea ice habitat continues to rapidly diminish.

“Little information exists on the number of seals polar bears need to eat in the wild,” said Anthony Pagano a research wildlife biologist with the USGS polar bear research program. “The data we’re collecting from Tatqiq will allow us to quantify the impacts of declines in Arctic sea ice on polar bear energy demands.”

Animal care staff and scientists from the San Diego Zoo Institute for Conservation Research spent five months training Tatqiq for her participation in the study. She was previously trained to wear an accelerometer collar for a related study, and the same device was used to track her activity and movements on the metabolic treadmill. Keepers worked to ensure Tatqiq’s comfort on the treadmill by providing positive reinforcement throughout each training and data collection session.

According to scientists, the data collected at the Zoo this week is unprecedented, and it is indicative of the special role that zoos can play in conservation science.

“The data that we are collecting through Tatqiq’s participation in this study is critical, and simply unattainable in the wild,” said Megan Owen, Ph.D., associate director of Recovery Ecology at the Institute for Conservation Research. “Ultimately, what we are learning from Tatqiq will improve our understanding of just how sea ice losses are driving declines in polar bear populations, and will inform future management efforts in support of recovery.”

A loss of sea ice habitat continues to threaten wild polar bears. Polar bears depend on sea ice to hunt their marine mammal prey, which are not accessible on land or readily available in open water. While polar bears are on land, they rest and fast, losing an average of 2.2 pounds (1 kilogram) of body mass per day. Increases in the ice-free seasons have caused declines in body condition and a decrease in the number of bears, with subadults having a higher mortality rate than adults. Data collected from Tatqiq is intended to identify the mechanisms behind these observed declines and improve forecasts of polar bear responses to continued declines in Arctic sea ice.

The San Diego Zoo’s three polar bears were originally found as orphaned cubs in the wild. With no chance of survival without their mothers, they were rescued and brought to the Zoo, where they have thrived. Visitors to the Zoo can observe Tatqiq, Kalluk and Chinook daily, at Conrad Prebys Polar Bear Plunge. 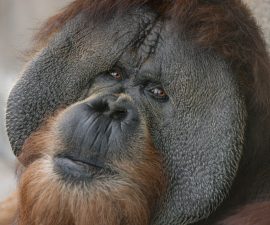