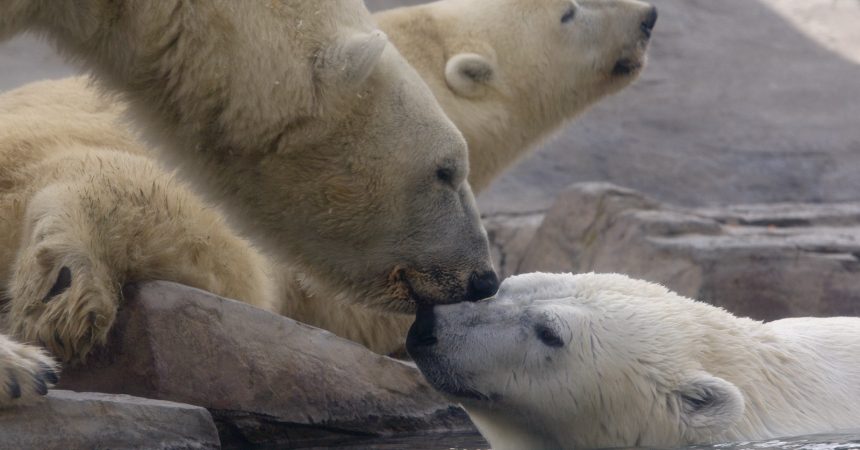 There’s a lot going on at the Zoo’s Conrad Prebys Polar Bear Plunge, 24 hours a day—even after all the guests go home and the keepers clock out for the night. At various hours, timed scent dispensers are releasing intriguing smells for the bears to investigate, food is provided at different and unexpected times, and the bears are exploring vegetation and ever-changing enrichment items in every part of their enclosure—indoors and outside—all day and all night long.

“We put synthetic raccoon urine out there (in the exhibit) today,” explained Nate Wagner, senior keeper. “Our bears are incredibly active, and they are interacting with their environment constantly. No two days are the same here—and the polar bears decide how things are going to go.”

All three of the bears originally came to the Zoo as abandoned or orphaned youngsters that would probably not have survived on their own. While they are now longtime Zoo residents, their keepers work hard to make sure that life at Polar Bear Plunge doesn’t become predictable and that things keep changing, as they do in the wild.

“These bears are high-energy animals,” Nate said. “So it’s important to keep them engaged, and to provide an environment that is constantly stimulating.

At Polar Bear Plunge, keepers’ goals are to encourage the polar bears to exhibit their natural behaviors, encourage the bears’ interaction with each other, and “let our bears be bears,” Nate said. Chinook, a 660-pound, 22-year-old female polar bear, is “the dominant force in this exhibit,” Nate said. “She is definitely the most assertive.” Born in February 1995, and it is thought she was orphaned a few months later. She was eventually found wandering the streets of Churchill, Manitoba, was rescued, and was brought to the San Diego Zoo in May 1996. Tatqiq, a 580-pound female that is now close to 16 years old, is the smallest of the three bears. She and her brother, Kalluk, were born in January 2001 and were orphaned at two months of age, when their mother—a bear with a radio collar that was being tracked by researchers—was found shot to death in Alaska. The two cubs were rescued and came to the Zoo in March 2001.

Tatqiq is not only the smallest, she’s also the greenest of the three. “Polar bear hair is not actually white; it is a series of hollow shafts that looks white in the light,” Nate explained. “Water stays inside when it gets wet, which makes it a perfect place for algae to grow.” Polar Bear Plunge’s big outdoor pool is filled with chilled fresh water, and small pools in the polar bears’ bedrooms are filled with room temperature salt water. If they spend enough time in that salt water, it helps promote a white-looking coat and eliminates some of the green. Tatqiq, however, would rather spend most of her time in the cold fresh water pool—thus, the light green tint to her otherwise white-looking fur. Kalluk, Tatqiq’s 1,283-pound brother, is very curious and very calm, Nate said. “Kalluk is one of the most ‘kick back’ animals at the Zoo. The only thing he doesn’t like is when one of the two girls wakes him up from a nap.”

Food and enrichment are introduced five times a day, and the three bears are separated twice a day. “Kalluk is so nice that if we fed him with the girls, they would eat all his food,” Nate explained.

Brother Kalluk and sister Tatqiq have always been close, and “Kalluk and Chinook together have a great relationship,” said Becky Wolf, one of Polar Bear Plunge’s three keepers. The two girls, however, are not as fond of each other, although they do get along.

There’s one thing the bears all have in common: “All three like to get as dirty as possible, all the time,” Becky said. They often roll in the dirt near the vegetation in their exhibit, and sometimes they end up looking more like brown bears than polar bears.

A Place to Thrive

The trio have a home filled with bear-usable spaces and special exhibit enhancements for them to explore. The bear’s habitat is filled with substrate, dirt, grass, and plants. Each part of the area was carefully configured to allow the bears to have a choice of how to use them. “We see a lot of different natural behaviors throughout the day,” said Nate. “They are digging, exploring the exhibit and interacting with each other.”

A part of the exhibit that both bears and humans alike enjoy is the Experience Wall—a mesh wall that allows bears and keepers to interact in the exhibit as guests watch. And there are huge underwater viewing windows along the side of the polar bears’ chilled fresh water pool, to let guests get an up-close view of swimming polar bears—and to let the bears get a good view of their fans.

“We are being proactive in giving our animals a better quality of life,” Nate added. “They have more access and choice, utilize the indoor space and outdoor areas, and have an auxiliary yard they can explore. Overnight, they pretty much have the run of the place—and we have a DVR that captures their movements through the night. Through all observations, we know that they use the resources 24 hours a day, even when we aren’t here. What we’re seeing is engagement.”

See the three bears in action at Polar Bear Plunge, or view them anytime on our live Polar Cam. 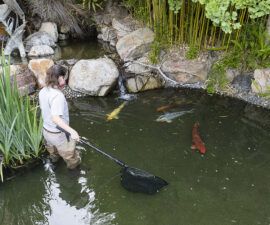 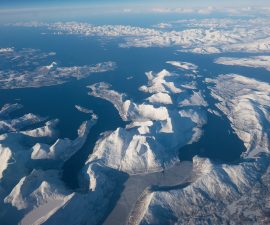 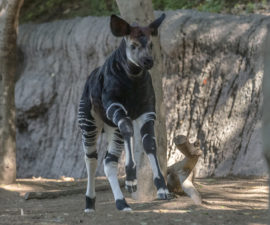