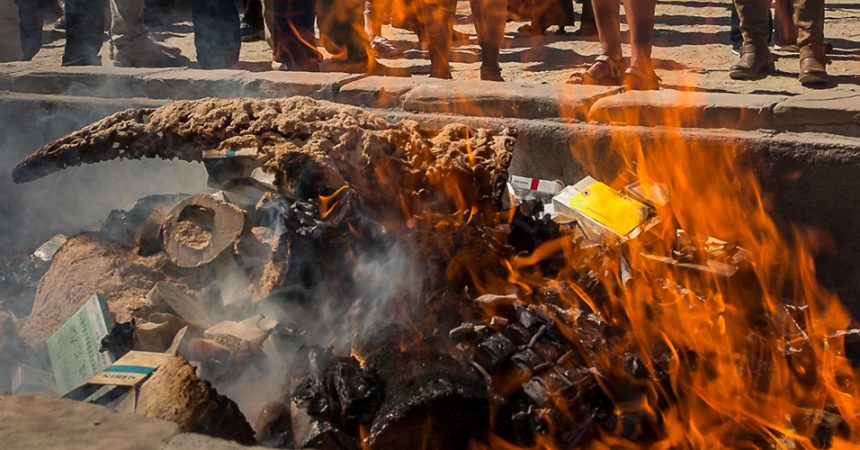 Smoke plumes from a fire pit at the San Diego Zoo Safari Park today provided a sobering reminder of the slaughter of rhinos taking place in Africa to feed a voracious demand for rhino horn. In a ceremony that signaled to the world the United States is committed to ending the scourge of wildlife trafficking, confiscated rhino horn items with an estimated black market value of $1 million — including whole horns, ornate objects and items falsely marketed as medicinals — were reduced to ashes. The U.S. Fish and Wildlife Service partnered with the San Diego Zoo Global and California Department of Fish and Wildlife (CDFW) to stage the symbolic event, the first of its kind in the nation.

“The poaching of rhinos in Africa is an international tragedy that is pushing these magnificent creatures to the brink of extinction,” said Service Director Dan Ashe. “The transience of the smoke we see today from the burning rhino horn reminds us of the fragility of the planet’s most imperiled species. Their survival hangs in the balance and will continue to do so as long as people are buying and selling illegal wildlife products. Only a rhino needs a rhino horn, and it’s time we all understood that.” “With passage of a new state law prohibiting the sale or purchase of rhino horn and ivory products, CDFW’s wildlife officers stand ready to do their part to combat wildlife trafficking in California and abroad,” said David Bess, CDFW deputy director and chief of the Law Enforcement Division.

“San Diego Zoo Global has been working for decades, along with other accredited zoos, to keep a sustainable population of rhinos safe under human care while also working to protect them in their native habitats,” said Douglas G. Myers, president and chief executive officer, San Diego Zoo Global. “We felt this loss firsthand with the loss of the northern white rhino, Nola, last year.  Because of Nola, because the northern white rhino is now effectively extinct due to poaching, and for all rhino species, we will continue to work diligently to ensure the survival of these incredible animals.” Rhinos already have disappeared from most of Africa. There are now only 20,000 white rhinos and 5,000 black rhinos left in the wild. Currently, a rhino is poached every eight hours in Africa. At this rate, rhinos could become extinct in the wild in 15 years.

Despite erroneous claims of its medicinal value, rhino horn – which is made of keratin, the same material that forms human fingernails – has no unique or particularly effective medicinal properties that can be scientifically attributed to the substance. Yet supposed remedies, which range from cancer treatments to hangover cures, are driving unprecedented poaching. In addition, objects made of rhino horn have more recently become status symbols to display success and wealth. As the black market value of rhino horn has skyrocketed, poaching has reached unprecedented levels in Africa. In 2015, 1,175 rhinos were killed in South Africa alone (home to the largest remaining populations of the species).

The battle against rhino horn trafficking is being fought around the globe, including the United States where the Service since 2012 has led Operation Crash, appropriately named after the term for a group of rhinos. So far, the ongoing international criminal investigation has led to 41 arrests and 30 convictions, with stiff sentences demonstrating that the nation will not tolerate wildlife traffickers. The investigations, involving agents from multiple regions and agencies, also have seized substantial amounts of rhino horn, some of which was destroyed at today’s event. Countries around the world are sending a clear signal that illegal wildlife products cannot be traded. For example, in April, 120 tons of elephant ivory and 1.3 tons of rhino horn were destroyed in Kenya, and many other countries are publicly destroying confiscated wildlife products. In the United States, the Service and its partners have held two events to crush more than seven tons of elephant ivory. In addition to capturing the public eye, these events create greater awareness urging consumers to be informed about wildlife products, especially those that may contribute to the poaching crisis.

The rhinoceros is an herbivore of prehistoric origin. All species of rhinoceros are protected under United States and international law. Since 1976, trade in rhinoceros horn has been regulated under the Convention on International Trade in Endangered Species of Wild Fauna and Flora (CITES), a treaty signed by more than 180 countries around the world to protect fish, wildlife and plants that are or may become imperiled due to commercial trade. 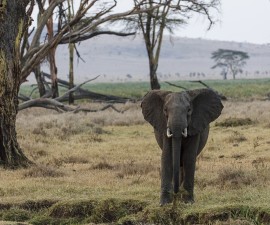