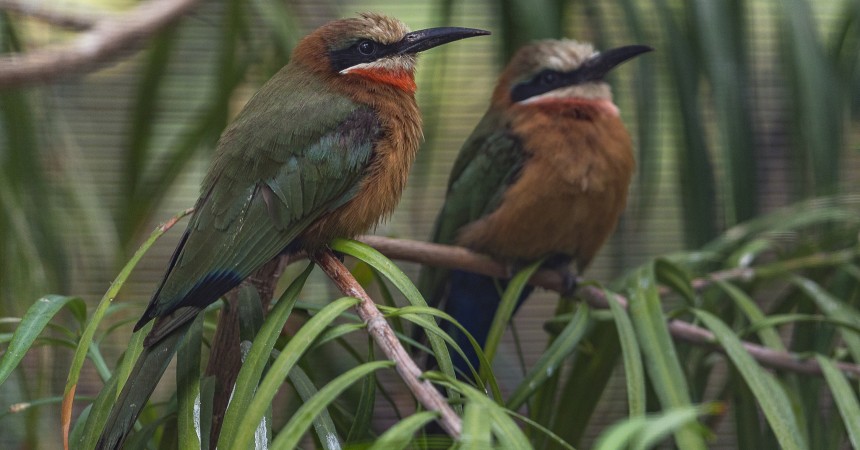 A custom-designed aviary at the San Diego Zoo Safari Park is currently buzzing with activity during the hatching season for white-fronted bee-eater birds. On Tuesday (May 15, 2016), keepers conducted a health check on a 22-day old chick, the 16th hatched this season and the 105th chick born since the Park began breeding this species.

The health check for the bee-eater chick consisted of putting an identification band on the bird’s leg, weighing the chick (43 grams) and taking a non-flight feather to send to a lab, which will conduct DNA testing to determine whether the chick is a male or female. White fronted bee-eaters are monomorphic, which means males and females look the same. These unique birds, while not listed as endangered by the International Union for Conservation of Nature (IUCN), are rarely found in zoos. The Safari Park is home to the only breeding program for this species in North America, which began in 1993.

The colony is fed a diet of mealworms, waxworms and crickets, and there are two beehives in the aviary—for supplemental feeding and to encourage their natural behaviors of “hawking,” when the bird captures a bee in-flight. The bee-eater will take the bee to a branch and rub off the stinger, before consuming it whole. The bee-eater is also able to slow its flight and hover near flying insects to catch them. These insect eating birds are found in Africa, south of the equator, and have a nesting technique that is not typical for birds: they build tunnels in earthen banks on hillsides, where they lay their eggs. At the Safari Park, animal care staff have simulated hillsides and burrowing tunnels leading to nest boxes, so staff members can monitor the eggs and hatchlings. This species has one of the most complex social systems of birds. Within the large colony there are family groups, known as clans, and younger non-breeding birds called helpers, which assist in caring for hatchlings. This system helps increase the overall survival rate of this species.

The white-fronted bee-eater bird is a colorful bird with green upper parts, reddish brown under parts, a black mask on its face, a bright red throat and a white forehead. 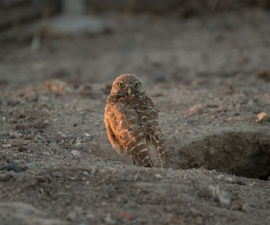 Wildwatch Burrowing Owl Invites the Public to Help with Crucial …
May 13, 2019 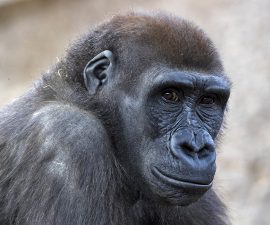