We lost an icon on Sunday, November 22: Nola, one of only four northern white rhinos left in the world. Here is part of her story.

For over 26 years, Nola called the San Diego Zoo Safari Park home. As most of us know, she arrived here from the Druv Kralove Zoo in the Czech Republic in 1989, with her coalition partner, Nadi. Neither female had reproduced; both were entering their late teens, a time when most rhino females have already had several calves. Nola and Nadi took quickly to the large open exhibits of the Safari Park. They learned to enjoy the California sun and the large expansive pond in the exhibit. Unfortunately, they never fulfilled the dreams that researchers, curators and keepers had for them. Neither female showed consistent interest in the male northern white rhinos—Dinka, Saut, and Angalifu—they shared their exhibit with. Very little mating behavior took place, and as a result, the northern white rhino is one of the very few animals we have not bred successfully at the Safari Park.

Nola was an avid painter.

While Nola never had a calf, she always had a following. At first it was her keeper staff who had the opportunity to know her intimately. Nola arrived with a hoof problem that required regular hands-on care. Nola’s nails curved upward, so they did not wear down normally. As a result, keepers had to perform nail trims on her so she could walk less flat-footed—something that, had she been left in the wild, might have led to her early demise. Nola received pedicures throughout her entire life, at the hands of her keepers. Nola learned early on to trust the humans around her—they always looked out for her well-being.

Because Nola was so tractable, she became an artist! A few years ago, she started “painting” by rubbing her horn on canvases with children’s nontoxic paints. Keepers learned that not all children’s paints are the same! She actually had preferences for one brand over another, based on the smell. Rhinos have very good noses, and she made her preferences known. As most of us know, she went on to paint pictures for auctions and rhino fund-raising campaigns. She also painted a piece for the state capitol, which was presented to Toni Atkins, speaker of the California State Assembly.

Even though Nola has passed, she gives us something to believe in. She gives us hope and love, but most of all she gives us courage. She’s been so strong for the last few months battling her illness. It’s her “I’m not giving up” attitude that has inspired her keepers to keep on. She wasn’t just passing the time: Nola had been living. Yes, she slept in every morning, and we brought her food to her, and we were there to trim her nails. But Nola enjoyed life. She even had a rhino companion: the 46-year-old southern white rhino bull named Chuck. Their relationship was special, and friendly. Nola and Chuck were two very old rhinos that had found a connection at the end of their days. That’s why we worked so hard to keep them happy—they deserved it. Chuck will continue to live in our South Africa exhibit, and you can visit him by taking the Africa Tram Safari or a Caravan Safari.

Here’s my final thought about my friend Nola. I believe God wants us to do what’s right for all species, not just the northern white rhinoceros. Thank you for being part of the team that knows the right thing to do. And thank YOU, world, for caring. What we do does make a difference.

Jane Kennedy is lead keeper at the San Diego Zoo Safari Park. Read her previous post, What’s It Like to Work With the Rarest Rhino in the World? 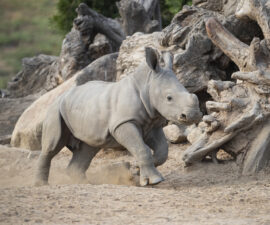 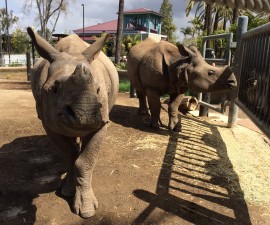