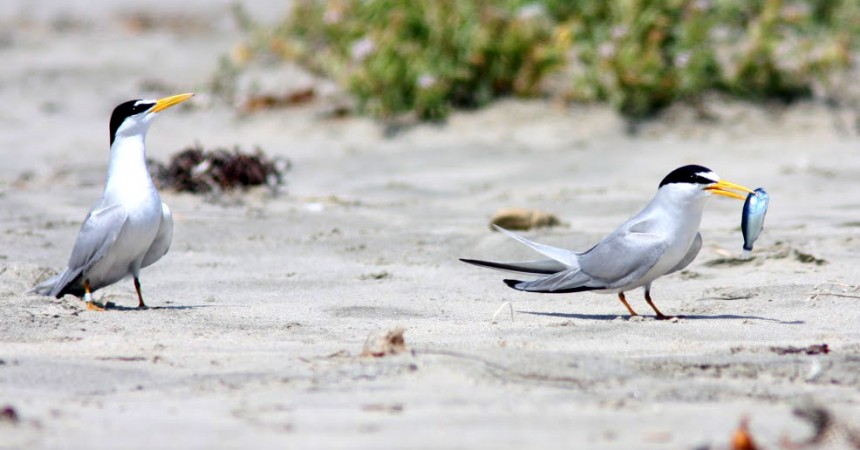 Both least terns and snowy plovers are ground-nesting birds that nest on barren to sparsely vegetated beaches, but they employ quite different breeding strategies. Over the past couple of months, I have been able to observe and compare these strategies while searching for and monitoring their nests.

Least terns are colonial nesters, using a “safety in numbers” approach, whereas snowy plovers use a strategy of nesting separately and being physically cryptic and secretive in behavior. Unlike the least terns, which have bright yellow bills and prominent black caps on their heads, snowy plovers have pale brown upper parts and blend in far better to their sandy surroundings making their nests less conspicuous and less likely to be discovered by predators. This also makes it much harder for us to find snowy plover nests!

If they didn’t occur in such concentrations, the least tern’s well-camouflaged nests could be a challenge for us to find. (Photo courtesy Marine Corps Base Camp Pendleton)

On a good day my crew members and I might find about a dozen snowy plover nests, whereas during the peak of least tern nesting we can—and have—easily found over 200 least tern nests in one day! On a particularly busy day this season, we could hardly walk more than 20 feet without discovering a new least tern nest. Calling out the nest count sounded a bit like we were bidding at an auction; sometimes several nests were found almost simultaneously with one crew member exclaiming “I’ve got nest 500!” only to be quickly followed by “501!” and a few seconds later by “502!”

Because least terns nest in large colonies of up to several hundred individuals, their nests are much more obvious, but there is a lower probability of a particular individual’s nest becoming the victim of a predator. Being in a colony also offers the additional protection of having many adults present that can mob predators. Having walked through an active least tern nesting colony, I can personally attest to the protective nature of the adults. They have threatened me with their harsh “zwreep” alarm calls, flown inches from the top of my head while dive-bombing me, and even defecated on me and my data sheets in an attempt to drive me away from their nests!

Monica Stupaczuk is a research associate with the San Diego Zoo Institute for Conservation Research. You can learn more about this project by reading A Day in the Life of a Beach Biologist. 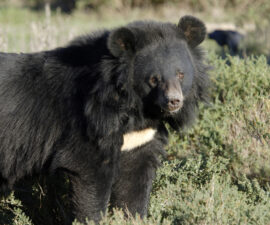 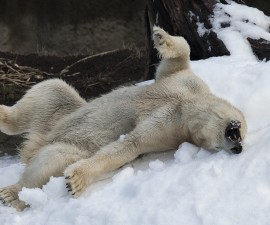 Another breeding season has come and gone for our polar …
April 10, 2015