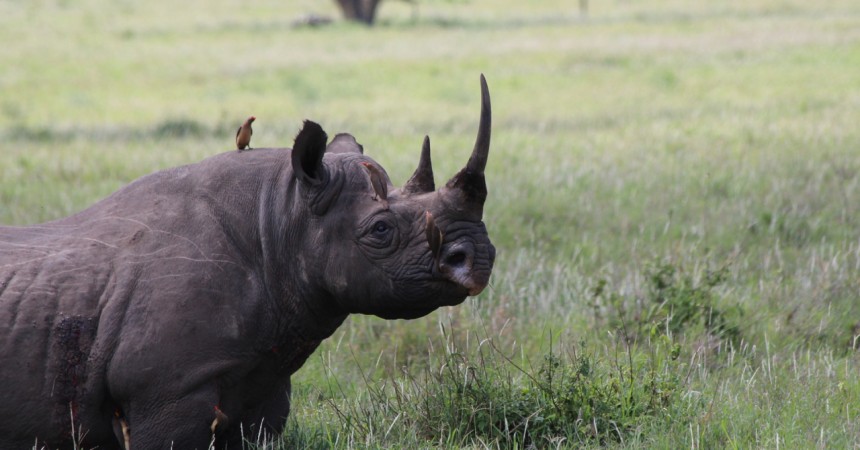 “Don’t worry”, came the calm tones of my passenger (and Institute colleague) Dr. Christine Browne-Nunez, as my foot pressed hard on the clutch. I had slammed the Land Cruiser into reverse, ready for a rapid retreat back through the weave of Acacia shrubs. However, not without unease, I returned to neutral and shut off the engine.

Coming face-to-face with a mother elephant and calf are certainly a big surprise…even in Africa.

Staring at us, having emerged from the bush onto the track in front of us, was a mature female African savanna elephant Loxodonta africana and her young calf. Despite being the most massive terrestrial mammals on the planet, elephants are surprisingly invisible in dense vegetation, and momma elephants can be very protective when surprised…

Christine and I have both worked on conservation research in East Africa over the years, but our reactions to encountering elephants in the wild were miles apart. Me: “How quickly can I backup?” Christine: “Let’s be among them, and wait for them to pass.”

The elephants passed peacefully, purposefully going about the business of consuming their daily requirement of 220 pounds (100 kilograms) or more of vegetation. In that moment, we realized that our differing reactions to encountering elephants underscored a much larger conservation dynamic in the region. The very dynamic that had led us to be in the car on that track in Samburu National Reserve, Kenya.

Christine’s prior research focused on the human aspects of elephant conservation around Amboseli National Park. When inside Amboseli’s boundaries, the elephants are well protected [thanks to the elephant researchers, the Kenya Wildlife Service (KWS), and others]. As a result they are less stressed, and do not feel as threatened in the presence of humans as do elephants in other parts of Kenya. The elephants there accept researchers, who can approach a herd and be among them. This has allowed researchers to gather the most intimate behavioral and social portraits of elephants anywhere—vital knowledge that has informed conservation.

Thanks to the equally pioneering and long-term work of Save the Elephants, when inside Samburu National Reserve, elephants now have a growing sense of security. They know that while within Samburu they are safer from human threats.

Watchful eyes of members of an elephant family group in Amboseli National Park. We know a lot about these elephants thanks to the research of the Amboseli Trust for Elephants.

In contrast, my previous experiences in East Africa are among elephants outside of formally protected areas. Where elephants face daily threats such as poaching, harassment, lack of access to resources, spears and bullets—a very negative environment. For instance, while working not far from Samburu, over in Laikipia, when I encountered elephants at such close range either in my vehicle or on foot, they’d immediately charge and I’d have to make a very rapid escape. Those elephants were stressed, feeling threatened, and so they would react in kind. What is interesting, however, is that these aren’t different animals we’re talking about. When the same, calm elephants in Samburu move into less-safe environments, they become aggressive in response to close human presence.

It’s not just elephants that act differently when they know they’re in riskier areas, overlapping with humans. I’ve experienced similar reactions in giraffes. In well-protected areas, they are less concerned about close proximity to humans and livestock, whereas outside those areas, it is hard to get within 110 to 218 yards (100-200 meters) of them, creating quite a challenge for giraffe researchers like me.

This is not to vilify the people who live among elephants and other large wildlife. Living with these giants is challenging. Elephants raid crops and can destroy a family’s livelihood (often their only income for the season) in a few hours. They also damage wells and can injure and kill people and livestock. So like the elephants, people need to defend themselves, their families, and livelihoods.

However, the more concerning threats are caused by the poachers who are responsible for the shocking decline in populations of elephants, rhino, giraffes, and other wildlife for trinkets and traditional medicine. They often mow down elephants and rhinos from a distance with automatic weapons or set neck snares for giraffe. It is these external drivers that cause the most conflict. They are also the reason for plummeting wildlife populations outside protected areas, and explain why wildlife are stressed and aggressive.

Two Maasai warriors get some refreshment by the new water pump near their boma just outside Ambsolei National Park, surrounded by a wall to protect against elephant damage.

East African pastoralists, or livestock herders, historically coexisted with wildlife. In fact over the millennia, both wildlife and human systems evolved in synch. Today, pastoralism remains a primary form of livelihood in East Africa. This complementary land use is key to successful wildlife conservation. Pastoralism leaves a porous landscape where herbivores and carnivores can live, access resources, and can travel between parks in search of resources, territory, or mates. Without such spaces and corridors, populations in protected pockets will atrophy and vanish, as isolated parks are too small for large, wide-ranging species.

The downside is that it is also in these vital areas where wildlife encounter their greatest threats, not only from poaching, but also from localized conflicts and ever-increasing habitat fragmentation.

It is in these complex settings that innovative conservation efforts are needed. As conservationists we need to understand not only what is happening with wildlife, but with the people living alongside and interacting with wildlife. This is the reason for our visit to Kenya, to move from conflict to coexistence between wildlife, people and livestock.

To be continued… Check back tomorrow to get to know the groups David and Christy met with, and what the future holds for collaborative conservation. 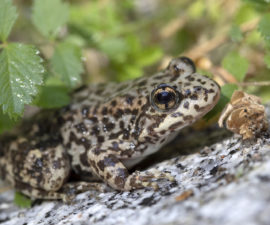 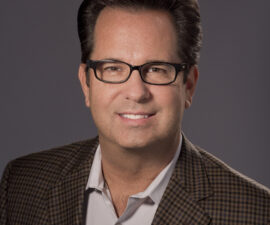 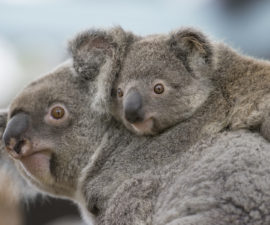