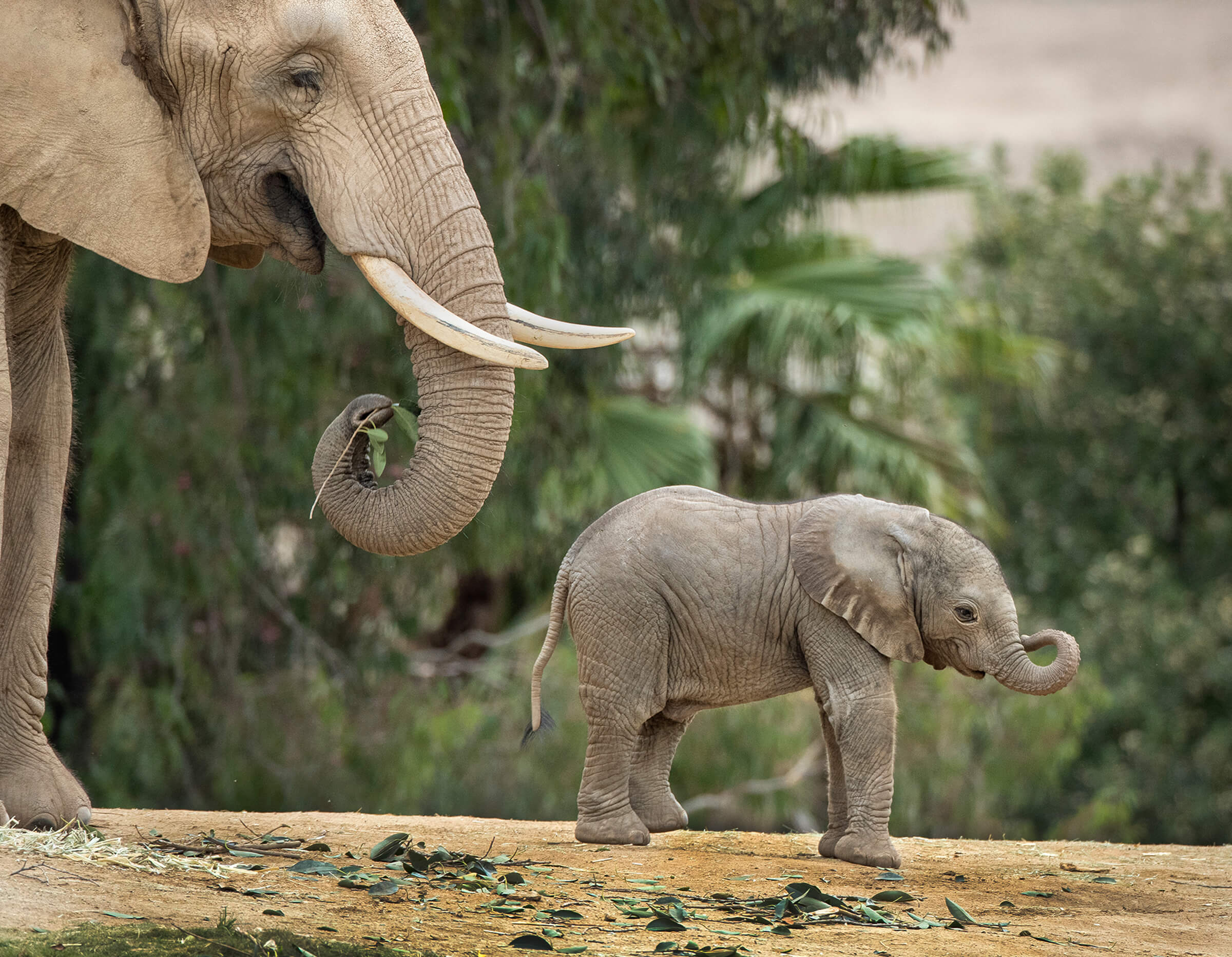 The Safari Park’s two African elephant calves recently celebrated their first birthdays—and what a big year it has been for these little ones. Male Umzula-zuli, called Zuli, and female Mkhaya, called Kaia, have been learning a lot: how to use their trunk, how to feed themselves, and how to build relationships with herd members. They’ve also been figuring out how to work with keepers on trained husbandry behaviors. But they’re certainly not all work and no play. The calves have enjoyed pool parties on hot summer days. Kaia has been busy socializing, and Zuli has been practicing playful head-butts and enthusiastically roughhousing with his eight-year-old brother Inhlonipho (known affectionately as Neepo). Both calves have been observing and imitating the behavior of other members of the herd. It’s part of the process of learning to be elephants that keeper Evan Miracle called “trunky see, trunky do.” They started to mouth fresh browse because they saw the older elephants eating it. They also began to push puzzle feeders around the yard, and Zuli practiced grabbing branches with his trunk and lifting them over his head, because he saw others doing it.

Zuli was born on World Elephant Day, August 12, 2018, to mother Ndulamitsi, called Ndula. He weighed about 270 pounds at birth. Soon after his arrival, he was met by the other members of the herd, who eagerly greeted him with trumpeting and gentle touches. “We were all delighted when he arrived,” said Mistley Bennett, who is Zuli’s primary keeper. “We haven’t had a baby elephant here in six years.” VIVE LA DIFFÉRENCE
Kaia and Zuli love playing together, but they have very different personalities. While Zuli tends to stay close to his mom Ndula (left), Kaia is more outgoing, often hanging out with other members of the herd, such as big sister Khosi (right).

Six weeks later, on September 26, 2018, Kaia, a female calf, was born to mother Umngani. The window for Umngani to give birth had been calculated as between September 12 and October 18—and her other calves had been born late. However, when keepers arrived the morning of September 27, they got a happy surprise: Umngani was caring for her healthy newborn calf. At 281 pounds, Kaia was the largest elephant calf ever born at the Safari Park. SIDE BY SIDE
While the two calves are perfectly matched playmates right now, indications are that Zuli (left) is going to be a large elephant. His trunk is already wider than Kaia’s, and he weighs more than she does.

It wasn’t long before Zuli and Kaia were playing together, sparring, pushing, head-butting, climbing, and tugging. They were learning about their world together, and learning from each other. “Kaia helps Zuli with his confidence,” Mistley said. “He’s a mama’s boy, but because he and Kaia play together, he’s learning to feel more comfortable separating from his mother.” As for Kaia, “Zuli keeps her tough,” Evan explained. “It’s like having an older brother. Kaia is a dainty little girl, and he’s like a tank.”

“These young calves are so much fun to watch,” said Curtis Lehman, animal care supervisor at the Safari Park. “They are so close in age that they naturally gravitate to each other. The calves’ moms know they are in a safe environment, so they’re allowing them to roam—knowing that if the calves stray too far or get too rough with each other, an ‘auntie’ will intercede and make sure they are okay.” It Takes a Herd

“Everyone plays a role in raising these kids,” Evan said. “Moms take over duties from each other, and sometimes it almost looks like a carpool, where today is her day to take the kids.” However, Ndula often ends up with both the calves. “Zuli usually wants to be near his mom, and since Kaia wants to play, she’ll come over to ‘his house,’ and his mom will watch the two of them.” “LITTLE GIRL”
“Zuli had a name when he was born, but Kaia (pictured with her mom, Umngani) had to wait a while for hers,” keeper Evan Miracle recalled. “We were calling her ‘Little Girl’ for a while, before they settled on the name Mkhaya.”

Umngani’s parenting style is more hands-off, Evan observed. “If she had any concerns, she would be nearby. Otherwise, she might be up in the other yard. But if that calf calls, she’ll come running—and there will be seven elephants out here forming a defense circle around the calf. Nobody takes chances with the babies.” Young auntie Phakamile, or Kami, age 12, and Khosi, age 13—who is also Kaia’s big sister—are the calves’ most frequent babysitters. Seven-year-old Qinisa is enthusiastic about babysitting too, but because she’s younger, she is watched closely by Kami and Khosi when she’s with the calves. The Tank and the Goth Girl

“Zuli has grown so much since he was born,” Mistley said. “I look at the photos, and I can’t believe it’s only been a year.” Zuli tends to take things slow and isn’t as free-spirited as Kaia. “He sleeps about a third more than Kaia. But when he wakes up, he finds mom to nurse, and then goes to play. He seeks out mud wallows, especially when Kaia is there. He’ll climb on anything, has a voracious appetite, and loves to hang out with the other boys.” SOCIAL BUTTERFLY
Networking seems to be Kaia’s strong suit, according to keepers. In her first year, she has been building relationships with every member of the herd—including eight-year-old Neepo.

Every elephant has its own unique wrinkle patterns, and Kaia’s big wrinkles around her eyes give her a distinctive appearance, almost as if she’s wearing dark eye makeup. “That’s why some people call her the ‘goth girl,'” Evan quipped. Kaia is the more gregarious of the two calves. “She was the social butterfly from the start,” Evan said. “Almost from day one, she was flitting around the yard, interacting with every elephant in the herd. She’s definitely matriarch material, because she is constantly networking. She probably even has a LinkedIn account we don’t know about,” he said with a laugh. At two to three months of age, Zuli and Kaia began to develop their fine motor skills, particularly how to use their trunk to pick up objects. “At first, their trunk is something they just can’t seem to fully control,” Mistley said. When they first start to eat solid food at about four or five months old, “putting food into their own mouth is something that is just not feasible,” Evan said. “It’s like little kids learning to feed themselves and can’t use a fork. When Kaia became interested in browse, she just put her face right into it.” EAGER TO LEARN
Kaia has been enthusiastic about learning husbandry behaviors from keeper Evan Miracle, such as targeting to a specific location and presenting different parts of her body—which will allow her to participate in her own health care in the future.

When Zuli and Kaia each reached four months of age, they started learning husbandry behaviors from their primary keepers—Mistley working with Zuli, and Evan working with Kaia. “It’s all about achieving certain skills they will need, participating in their own health care,” Evan noted. “At four months old, all their reinforcement comes from their mother,” Mistley explained. “So for training purposes, we had to find the best ways to interact with them, what tactile stimulation they like, and what kind of foods they like.” READY-TO-EAT—AND WEAR
Zuli has discovered that browse is not only nutritious, but also fun to wear on his head.

When the calves first showed an interest in specific food items, the keepers hand-fed them. Zuli developed a fondness for carrots and yams; Kaia decided she loves carrots, but not cucumbers. Those favorite foods became treats used in positive reinforcement of husbandry behaviors. Before long, it wasn’t necessary to put treats directly into their mouth: Kaia and Zuli learned how to use their trunk to feed themselves. “Now, Zuli gets indignant if you try to put food into his mouth. He’s like, ‘I can do this!’” Mistley said.

Each calf approaches training differently, with different strengths. Kaia is less food-motivated than Zuli, but she loves learning new things. “Kaia is always gathering information, and she’s very Type A,” Evan explained. “If she doesn’t understand what behavior you’re looking for, she keeps trying different things until she finally finds the right one.” Mistley said that “Zuli loves his food, and he loves training.” He has excelled in voluntarily presenting an ear or a foot, especially when treats are involved. BRANCHING OUT
Zuli quickly learned how to pick up branches with his trunk after watching his mom, Ndula.

When a calf is working on husbandry behaviors, mom is always close by. “That bond is very important right now,” Evan said. “The mothers are comfortable allowing us to interact with their kids—and both the mothers have been phenomenal in relationship building, showing their calves that we are trustworthy; that they can count on us.”

Zuli and Kaia continue to grow bigger and stronger, and to reap the benefits of living at the Safari Park. “It’s an honor and a privilege to work with these calves,” Evan said. “You can count on one hand how many elephants have been born in North America in one year. These are very special youngsters.” Both calves still have a lot to learn. But with the help of their watchful moms, their aunties, and the rest of their adoring herd mates—along with a little help from their keepers—these playful calves will grow up happy, healthy, and well prepared for “living large.” African elephants are categorized as Vulnerable on the International Union for Conservation of Nature (IUCN) Red List of Threatened Species. They face serious threats in their native habitat, from poaching for their tusks, hide, and bushmeat. San Diego Zoo Global is involved in a variety of community-based conservation efforts in Africa, including Reteti Elephant Sanctuary, which cares for injured, abandoned, and orphaned elephants in the Namunyuk region of Kenya, preparing them for return to their habitats. Elephant calves that arrive at Reteti are often stressed and compromised, and they rely on bottle-feedings to provide needed nutrition.

At the Safari Park, mother elephants Umngani and Ndula are currently participating in a study of the nutritional content of a mother elephant’s milk, to help researchers come up with a nutritious milk-substitute formula that may help the orphaned calves at Reteti—as well as other hand-raised calves. Umngani and Ndula have been trained to voluntarily express small amounts of milk, allowing researchers to study its composition, fat content, proteins, amino acids, and other nutrients.

San Diego Zoo Global is collaborating with the University of California, San Diego, and Smithsonian’s National Zoo Milk Repository on this project. “Not a lot is known about African elephant milk, and we have this wonderful opportunity to collect milk from not one, but two nursing mothers at the same time,” said Mindy Albright, Safari Park lead keeper. “Another exciting thing about the milk study is that it is planned to span the entirety of Ndula and Umngani’s nursing period. This is an opportunity to see how the composition changes throughout the two to four years a female nurses her calf.” 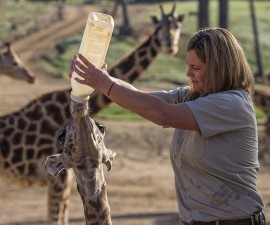 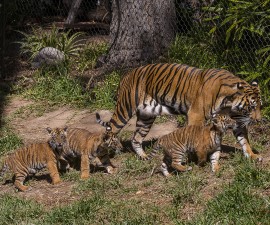 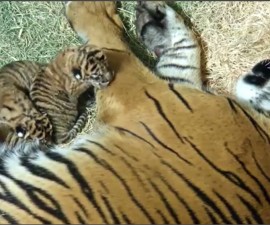