A variety of animals at the Zoo benefit from regular acupuncture treatments. With animals living longer in zoos, this non-invasive technique can block chronic pain signals and help them live comfortably.

Acupuncture is an ancient healing method. It has been practiced since at least 100 BC and the first acupuncture book was written by
100 AD.

The gray koala, fluffy as a toy, pulls fragrant eucalyptus leaves into her mouth. She is nestled securely in a portable tree branch perch about six feet high in her exhibit in the Zoo’s Conrad Prebys Australian Outback. Chewing, she calmly gazes at us, as her nearly saucer-sized ears move toward various sounds in the distance. Dr. Beth Bicknese, Zoo senior veterinarian, skillfully slides tiny needles through her dense fur into various “acupoints” on the 10-year-old marsupial. The koala doesn’t flinch. “Kiki has significant hip arthritis,” explained Dr. Beth, “so we administer acupuncture every two weeks, to lessen her lameness and maximize her comfort.” Koalas in particular can benefit from this non-invasive technique of alleviating pain, as their diet of eucalyptus leaves is high in toxins, which their liver readily chews up—along with any medication they may be given orally. “Anti-inflammatories do not persist in the koala’s system, so acupuncture is a great alternative,” Dr. Beth said.

While not everyone is sold on the efficacy of acupuncture on humans, much less animals, Dr. Beth, a scientist and skeptic, has seen it help a variety of animals at the Zoo. In addition to koalas, “we have had good results with a Philippine dove suffering from eye lid droop after a trauma, a Caribbean flamingo, a Fiji iguana, a Johnston’s crocodile and other reptiles,” she said. “Other cases had mixed results.” Kiki continued to enjoy her leafy breakfast with three needles surrounding each hip (the “hip triad” of acupuncture points), one on each ankle and knee (distal points travel up the spine linking nerves together), and a few on her back to have more “cross-talk” between the nerves. After 10 minutes, Dr. Beth removed the needles, placing them in a magnetic bowl to be carefully accounted for. Kiki was placed on the ground in her enclosure. Both keeper and vet were excited as she strode over to her tree and proceeded to climb up to her perch. “She used to have a ‘crumbling’ gait and was unable to keep her hindquarters up, but now she seems much more comfortable and agile,” said Dr. Beth. Some geriatric koalas also have shoulder arthritis, which can be debilitating for tree climbing animals, and acupuncture is useful for that as well.

As zoos have become better at managing animals and providing improved diets and husbandry techniques, animals are living much longer—and needing more intensive “senior care.” Medical Acupuncture for Veterinarians (MAV) is a science-based course available to licensed veterinarians. It requires 80 hours of online classes and 9 days of small- and large-animal hands-on classroom study. Dr. Beth got certified last April, though “it will be a life-long learning thing, layering on knowledge.” She relishes the scientific aspect of using the neuro-anatomy to effectively treat disease and manage pain in different species. Dr. Beth explained that using acupuncture on, say, Kiki does not give the animal new, healthy joints but instead, “changes how much pain is generated and how she perceives it,” which is the next best thing!

Acupuncture has been used in China for thousands of years, for both treatment and prevention of disease. Medical Acupuncture for Veterinarians is more “Western” and is evidence-based in neuro-anatomy. The American Veterinary Medical Association considers veterinary acupuncture “a valid modality within the practice of veterinary medicine and surgery.” In 1993, the World Health Organization published a standardized nomenclature for 361 classical acupuncture points, giving more credence (and consistency) to the therapy. Acupuncture is especially useful when side effects of other modalities outweigh benefits, when other modalities are ineffective (last resort), or when surgery is not feasible (such as with elderly animals). Acupuncture needles are typically stainless steel, sterilized, single-use, and extremely thin tools ranging from one-half to three inches long. Silicone-coated needles are easier to insert, but have less “tissue grab” than non-coated needles.

The brain and the spinal cord are responsible for the pain experience, and they are on the hook for the treatment of it, as well. While our reaction to acute pain can be adaptive—put pressure on the wound, apply a bandage, seek help—chronic pain is more difficult for our brain to manage. The Gate Control Theory holds that as pain signals surge from the area of injury along the spinal cord, “nerve gates” open and close, slowing one signal to let another one pass before it reaches the brain. (When you shake your hand after hitting your finger, this is gating of pain at work.) Acupuncture points are rich in nerve endings, and when needles are inserted, a reaction occurs (“micro-inflammation”) and this competing stimulus can inhibit pain signals from reaching the brain. Acupuncture can be an elegant, non-invasive solution to some health issues.

Back in the Pink

Floyd the flamingo was born with abnormally bowed legs, and he had two surgeries to correct this condition. Keepers took tender care of the bird 24/7 during his lengthy recovery. He continued to have residual bowing to his legs, but Floyd was mobile, albeit favoring one leg. Recently, he seemed to have injured his “good leg,” which is a real problem for a flamingo, as they stand on one leg to rest. Keepers helped him by holding him so he could rest for a bit—as long as Floyd can tuck his beak into his caregiver’s armpit or neck, he’s quite content! He was given three medications for the swelling and pain, and sessions of acupuncture. “We start big, with six to eight treatments per month, then start to back down to a couple of times a month if the animal’s health allows,” Beth said. Floyd currently gets weekly treatments.

A keeper holds the flamingo, his feet dangling. Dr. Beth moves in with the needles and the bird appears to relax, perhaps anticipating the relief this strange ritual provides. Needles are applied from his webbed foot, to the ankle joint (where the leg bends backward), and to the knee joint (at the feather line), and three are inserted beneath his wing forming a “hip triad.” For 10 minutes, the needles do their job of stimulating nerves, increasing blood flow, relieving muscle spasms, and unlocking the body’s natural pharmacy of endorphin opioids, among other benefits. Floyd appears completely relaxed throughout. After the removed needles ping into the dish, Floyd is released back to the group. He saunters into the pool, to a cacophony of his comrades. “As long as he is willing to fight, we’re willing to fight with him,” said Kristina Lauro, senior animal trainer (and one of Floyd’s close confidantes). The multi-modal approach including acupuncture seems to be getting Floyd—and other animals—back in the pink! 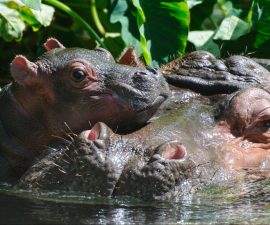 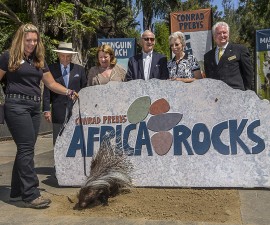 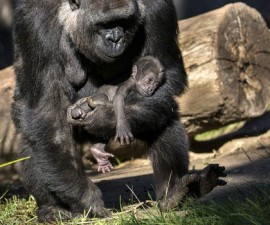