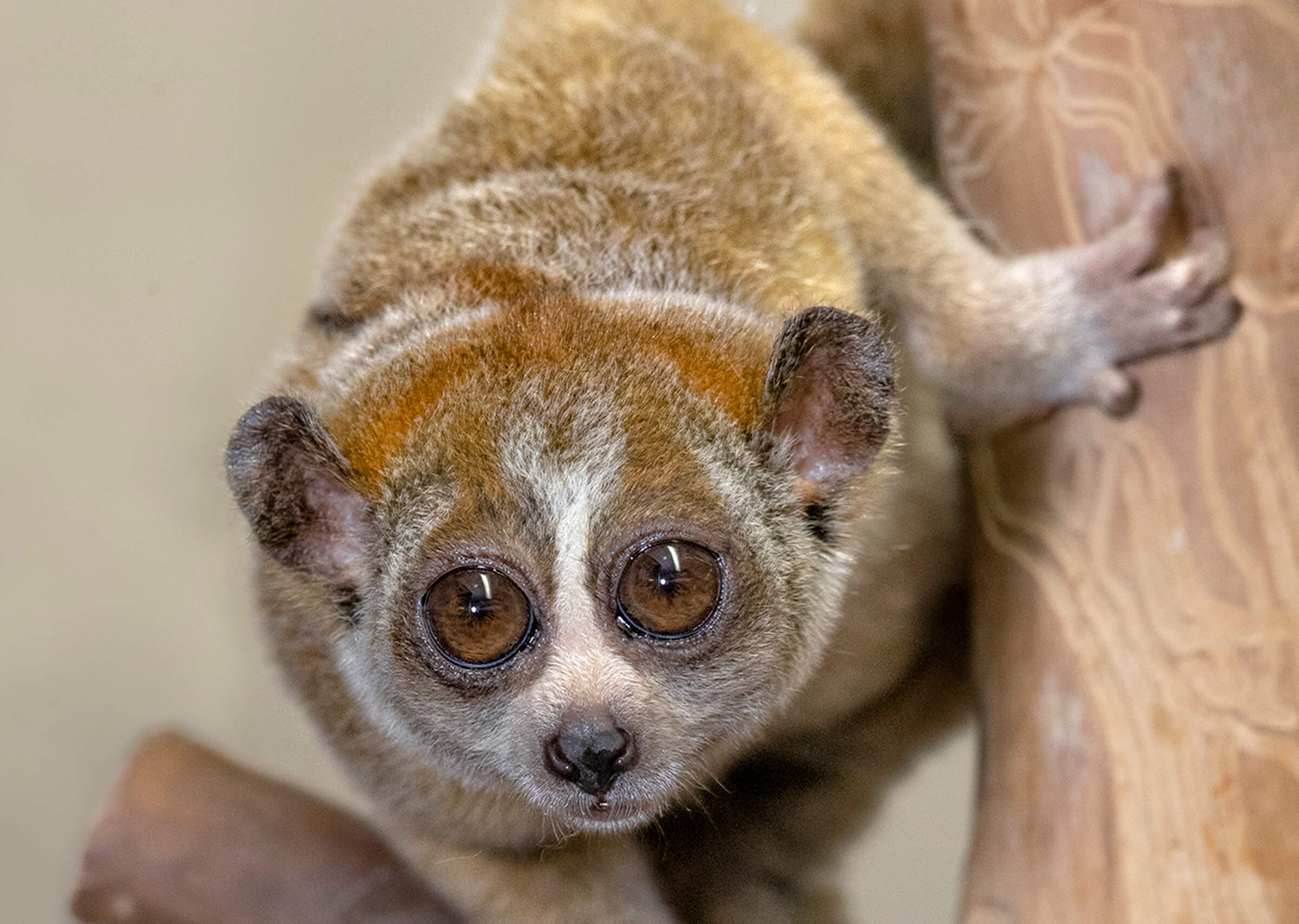 One way for a pint-sized primate to avoid predators and competition for resources is to tuck in by day and forage for food at night. Add to that an uncanny ability to vanish into the trees by moving slowly or not at all, as well as producing venom on demand, and you have the most endangered non-lemur prosimian: the pygmy slow loris.

What little is known about the pygmy slow loris Nycticebus pygmaeus is intriguing and exceptional. It is arboreal, omnivorous, precocial, and generally solitary, with a penchant for polygyny come breeding season. But what really gives the loris a leg up on the competition is that it is the only known venomous primate, a highly unusual characteristic among mammals. The loris produces a secretion from glands on the insides of its elbows, which, when mixed with saliva in its mouth, serves to create a venomous bite. Female lorises sometimes “park” their youngsters while they feed, and they can whip up the toxic elixir and lick their little one’s fur, which deters predators.

With big, round, night-vision eyes; small dark ears; a wet nose; a fluffy russet coat with snappy white accents; and plump little gripping digits, the pygmy slow loris is likely the most adorable creature you’ll never see in the wild.

Dutch explorers of the 18th century brought back loris specimens, and it is thought that the species got its name from the Dutch word “loeris” for clown. But whether that is based on the loris’s color pattern or its behavior is debatable.

Living up to its name, the pygmy slow loris is both small—reaching a mere nine inches in length—and methodically slow, ambling along branches on all fours. Its hands and feet are über dexterous. The loris is able to hang motionless, a skill facilitated by extra main-limb vascular bundles called retia mirabilia that allow blood to flow to its extremities, so the animal doesn’t experience “pins and needles” from lack of circulation. It grasps small branches with an iron grip, even as a predator tries to pry it off. During warm months, the pygmy slow loris is on the move throughout most of the night, moseying quadrupedally, stretching from one branch (or tree) to the next; it rarely comes to the ground. Slow lorises can actually move faster than other loris species, covering nearly five miles in a night! During chilly months, they may enter a state of torpor, living off their fat reserves and moving very little.

The pygmy slow loris eats different types of plant and animal matter. According to the Duke Lemur Center, fruits and gums make up more than half of the diet, and insects and small prey items make up another 30 percent. Using its acute sense of smell, a loris effectively hunts and dines in the dark. If a hapless insect goes by, the loris swiftly snatches it out of the air with both hands. ALL IN THE FAMILY
The lorisidae family includes African pottos and angwantibos, and the Asian lorises.  There are two species of slender loris and about eight species of slow loris. (The taxonomy of this genus remains fluid.) Pictured is a pygmy slow loris.

It’s not all fun and games, though, as the pygmy slow loris is preyed upon by pythons and raptors (and humans). But they don’t take threats lying down! The first line of defense is a fierce hiss and emitting a strong, don’t-eat-me odor. If it’s still under siege, the loris clasps its arms over its head—a pose that, combined with its facial markings, mimics the expanded hood of an angry spectacled cobra. Who would tamper with that? The loris can even undulate in a serpentine fashion (helped by an extra vertebra), further deceiving a potential predator.

The pygmy slow loris lives in Vietnam (east of the Mekong River), eastern Cambodia, Laos, and the Yunnan province in southwestern China; it is sympatric with the Bengal slow loris N. bengalensis. Slow lorises are difficult to detect even within their known range. They live in bamboo forest mixed with hardwood trees, forest edge habitat, and dense scrub. Their specialized dentition can gouge trees to induce the flow of gum and sap for consumption. Though surrounded by leaves, they don’t eat them, but occasionally lick them for moisture. KEEPING THEM SAFE
Keepers like Rochelle Willison are passionate about conserving this species. While conservation programs are vital to their survival, it is also up to the consumer to not perpetuate the trafficking of these animals by taking them as pets.

Lorises are killed for folk remedies in Cambodia to treat stomach problems, wounds, broken bones, and sexually transmitted diseases. There is no scientific evidence to confirm the efficacy of dried loris for any of these conditions.

Before you say “I want one” or even click “like” on one of the countless internet videos, know that the illegal pet trade is one of the most horrific threats to lorises—and they make terrible pets! As noted, they are nocturnal, so bright light is highly stressful for them. Thousands of slow lorises are poached from the wild using spotlights shone into the trees. The light reflects off the animals’ tapetum lucidum, a mirror-like structure in the eye that improves night vision, and disorients them as the “hunter” nabs them. Worst of all, the little animal’s teeth are cut using nail clippers, wire cutters, or pliers (with no anesthesia), so the buyer won’t be bitten. The animals are transported in dark, overcrowded, poorly ventilated containers, and many of them die along the way. People who keep lorises cannot feed them appropriately, resulting in disease, distress, and early death for the animals. Loris poaching is a savage black market that informed, compassionate consumers want no part of. International Animal Rescue launched the “Tickling Is Torture” campaign to combat viral videos and “cute” photos of slow lorises being kept as pets, which perpetuates the illegal trade of slow lorises. Awareness is key. These fascinating animals belong in the forest, not under glaring lights getting combed with a toothbrush for social media. LOOKING AHEAD
The San Diego Zoo participates in AZA’s Species Survival Plan program for this species, and it is hoped that Padma will have little lorises of her own soon. Pygmy lorises can live up to 17 years in the wild, and about 20 years in managed care.

Other venomous mammals include the duck-billed platypus, vampire bats, some shrews and moles, and shrew-like animals called solenodons. Most are not immune to their own species’ venom, leaving sparring males dead from bites from their conspecifics.

Trio at the Zoo

The San Diego Zoo is home to three pygmy slow lorises: 15-year-old Minh, 5-year-old Abhi, and a 10-year-old female, Padma. They are in a cozy, nocturnal, off-exhibit breeding area, as part of the Association of Zoos and Aquariums’ Species Survival Plan (SSP) program. Primary keepers Rochelle Willison and Matthew Bearden pay keen attention to the animals’ health and welfare, and go to great lengths to keep the little primates engaged.

In the early morning, keepers entice the lorises with a spoonful of apple sauce—a loris favorite—in order to examine them and document their weights. “We look to see if they moved stuff around and used their enrichment during the night,” explained Rochelle, who has a genuine passion for these animals. “They can be feisty little things, too!” By night, the lorises enjoy an array of fruit, crickets, mealworms, hard-boiled eggs, and a bit of baby food. Their room is kept around 80 degrees Fahrenheit, which suits them. Keepers provide novel scents, hanging hammocks, toys, and small animal beds to keep things interesting. “They hide out, ‘tucking’ during the day, which is another way to tell if they’re healthy,” added Rochelle.

Both keepers noted that the illegal pet trade poses a grave threat to these beguiling animals. “They have so many unique traits,” said Matthew. We need to “get them in the eye of the public, so people understand the threats they face.” Humans can be the solution, or the problem. It’s up to each one of us. 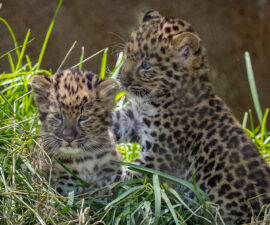 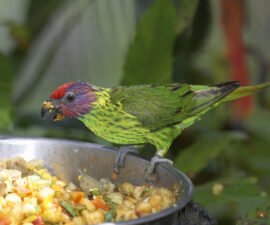