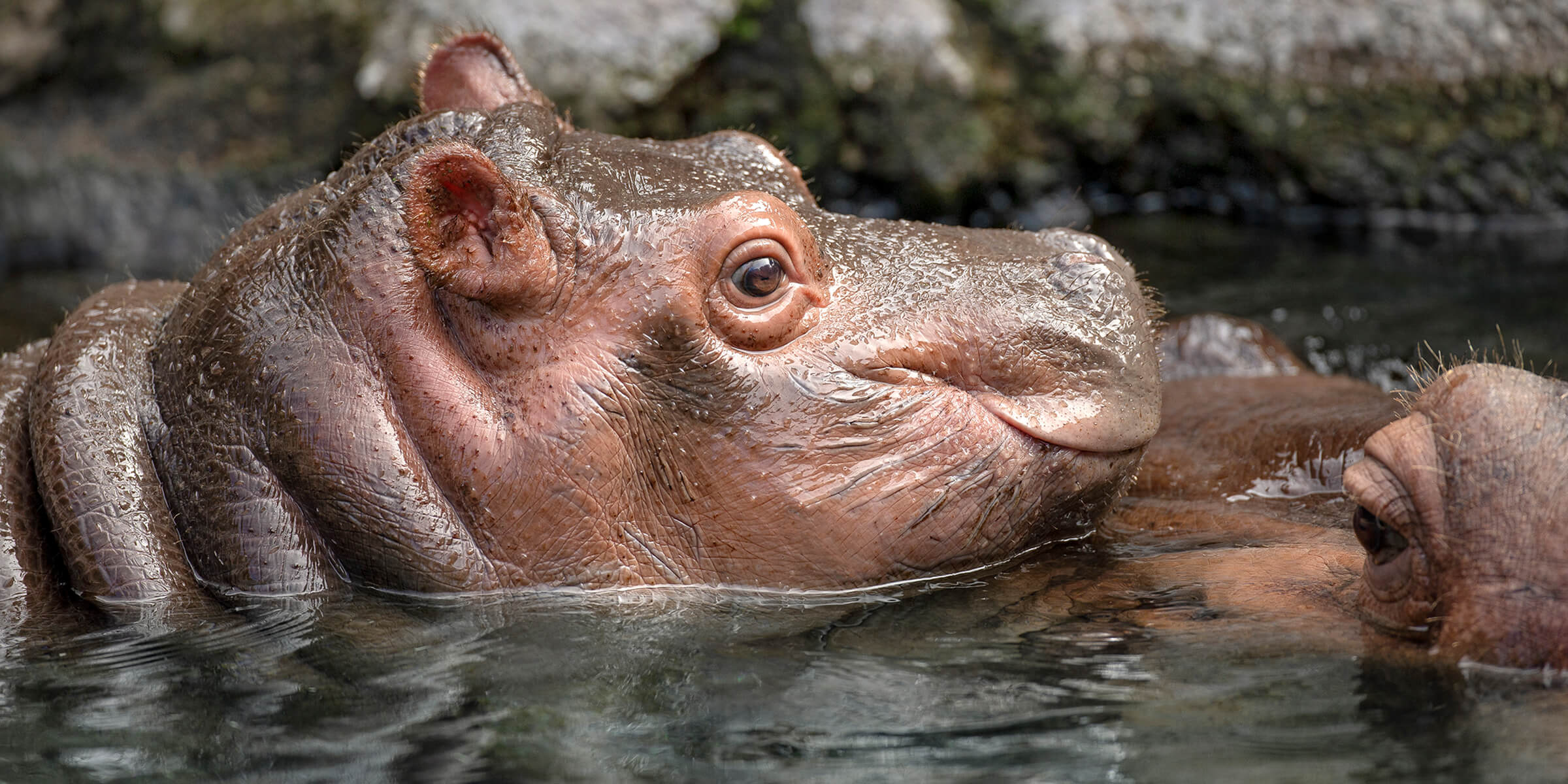 Hippo Calf Amahle Proves to Be a Big, Adventurous Handful

Under a full moon, just after the Zoo closed for the evening on February 8, 2020, female river hippo Funani gave birth to her most recent calf at the San Diego Zoo. Since then, this fast-growing baby girl has proven to be both precious and precocious.

The calf, now four month old, was named Amahle (pronounced ah-MA-shleh), a Zulu word meaning “beautiful one.” Funani’s daughter is not only beautiful, she is also adventurous, smart, and testing her boundaries every day. “Amahle is more advanced than any other calf I’ve ever dealt with,” said Jen Chapman, senior wildlife care specialist at the Zoo. “This calf has been strong and independent from her first breath. I think Funani realizes she’s got a ‘wild child’ on her hands.” MOM’S ALWAYS WATCHING
Funani is an experienced mom who knows how to keep her daughter out of trouble, using “teachable moments” to help Amahle learn the skills she needs to grow up strong and independent.

Perhaps all that self-confidence is understandable, given her celebrity status. Amahle appeared on national television—live from the Zoo—when she was less than a month old; her name was chosen by thousands of fans in an online vote held in conjunction with “Good Morning America”; and she’s made frequent appearances on social media—including a Facebook Live streaming event. However, Amahle has an experienced mom who knows how to keep her in line, keep her safe, and teach her what it takes to be a river hippo. “As a mom, Funani is a superstar,” Jen said. “She’s amazing. She takes every opportunity possible and makes it a teachable moment.”

Spirited from the Start

Soon after Amahle was born, her independent nature became evident. “At first, it was like Amahle didn’t have any idea that she was supposed to listen to Funani,” Jen recalled. “She was jumping around—rambunctious, wily, and precocious—and getting into the weirdest spots, just out of reach.” But Funani was calm, acting appropriately, and already establishing communication, Jen said. Funani was getting Amahle to move out of those spots and come back to her. She stayed with her calf, vocalizing and nudging her.

“Then I saw Funani and her calf finally bonding and communicating,” Jen said. “Funani was able to get Amahle to come to her again and again—and, one step at a time, Amahle gradually learned what to do. That’s important, because the pool is one area we can’t baby proof. That first night, there was a lot of stress. But it was amazing to see how quickly that bond was forming.” Each Day Brings More to Learn

Funani is always watching Amahle, and is ready to help out if she needs it. But mom gives the calf plenty of space to explore on her own, Jen said. In the pool, that may mean keeping track of how long Amahle has been underwater, then coming up underneath to push Amahle to the surface when it’s time to take a breath. “As a one-and-a-half-month-old, Amahle was already holding her breath underwater for more than a minute,” Jen said.

By two months of age, 150-pound Amahle was not only nursing but also eating “gruel,” or pre-chewed food from her mother’s mouth, and was starting to mouth solid food. Most of her nutrition was still coming from nursing, but Amahle had discovered a fondness for greens and beet pulp.

Amahle has been an eager participant in training with wildlife care specialists, to allow her to participate in her own wellness care. “She knows how to open [her mouth] for us, and she allows us to do gum massages,” Jen said. “She’s teething now, and we’re seeing perfect tooth growth.” Amahle also knows how to target, or come to a specific requested location, Jen said. “On a normal morning with two training sessions, I asked Funani to target, in line with the target buoy on a stick. Funani targeted—then I heard her make her little grunts, and Amahle came over and touched the target.” The mother and daughter training sessions, mostly focusing on Funani and her behaviors, started out short but are gradually getting longer. “Amahle has these great little bursts of energy, then takes naps,” Jen said. Dad’s Around the Corner

When Funani was getting ready to go into labor, she signaled that she was ready to separate from her mate, male hippo Otis—letting him know to keep his distance. Currently, Funani and Amahle are in the main outdoor habitat on Tuesdays, Thursdays, and weekends, while Otis has the outdoor habitat to himself on Mondays, Wednesdays, and Fridays.

“Otis is our unsung hero: he was kind of pushed aside when Amahle was born, but he’s enjoying his ‘bachelor time’ right now,” Jen said. “When he’s with Funani, she’s dominant and only lets him have access to certain parts of the habitat. Now he’s on his own and is free to enjoy places he wouldn’t ordinarily be allowed in.”

All three hippos interact in the indoor area, with protected contact to ensure everyone’s safety. “Funani will walk the calf over to him for social time,” Jen said. “Funani and Otis can touch on top of the doors—I call it playing kissy face, because they put their chins on top and snort back and forth. And regardless of where they are throughout the day, they vocalize and communicate with each other.” Many developmental milestones lie ahead for Amahle. By the time she is six months old, she may weigh as much as 800 pounds. One cup of hippo’s milk provides about 550 calories, making it extremely nutritious. By one year of age, Amahle will be grazing on grass, eating more solid food, and nursing less often. While hippos in their native habitats nurse until they are nine months to a year old, “Here, it is a different story,” Jen said. “Our hippos don’t have to compete for food, so mom is not pushing them away, and they get to be a ‘baby’ a little longer.”

Other major achievements still on the horizon include getting to the deepest part of the pool, and reaching the far side without a rock to push up on, Jen said. “We’re not to that point yet.” Her low-frequency vocalizations will also become more audible, and all her teeth will come in. “She will be getting even more independent, and Funani will give her more space,” Jen added. “We’re already seeing some space between them—but the big milestone will be when Funani will remain in the pool when the calf is on the beach. Now, Funani will let her play in shallow water, but she is there watching to make sure Amahle doesn’t get out of her comfort zone.” Hippos are listed as Vulnerable on the International Union for Conservation of Nature Red List of Threatened Species. In their native habitats in sub-Saharan Africa, they face threats from habitat loss, conflict with humans, and illegal hunting for bushmeat or the ivory in their canine teeth. “People often don’t realize how big a threat ivory trafficking is for hippos,” Jen said. “Even though it’s illegal, it’s still happening. A big ivory bust at a San Diego jewelry store in 2019 was right in our own backyard, not in another country. Hippos, like elephants, are still threatened.” 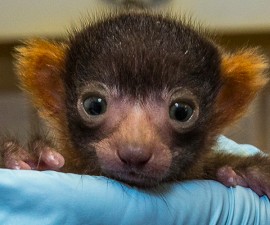 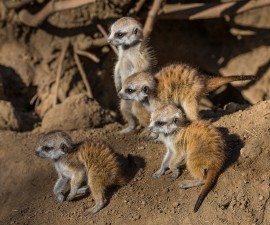