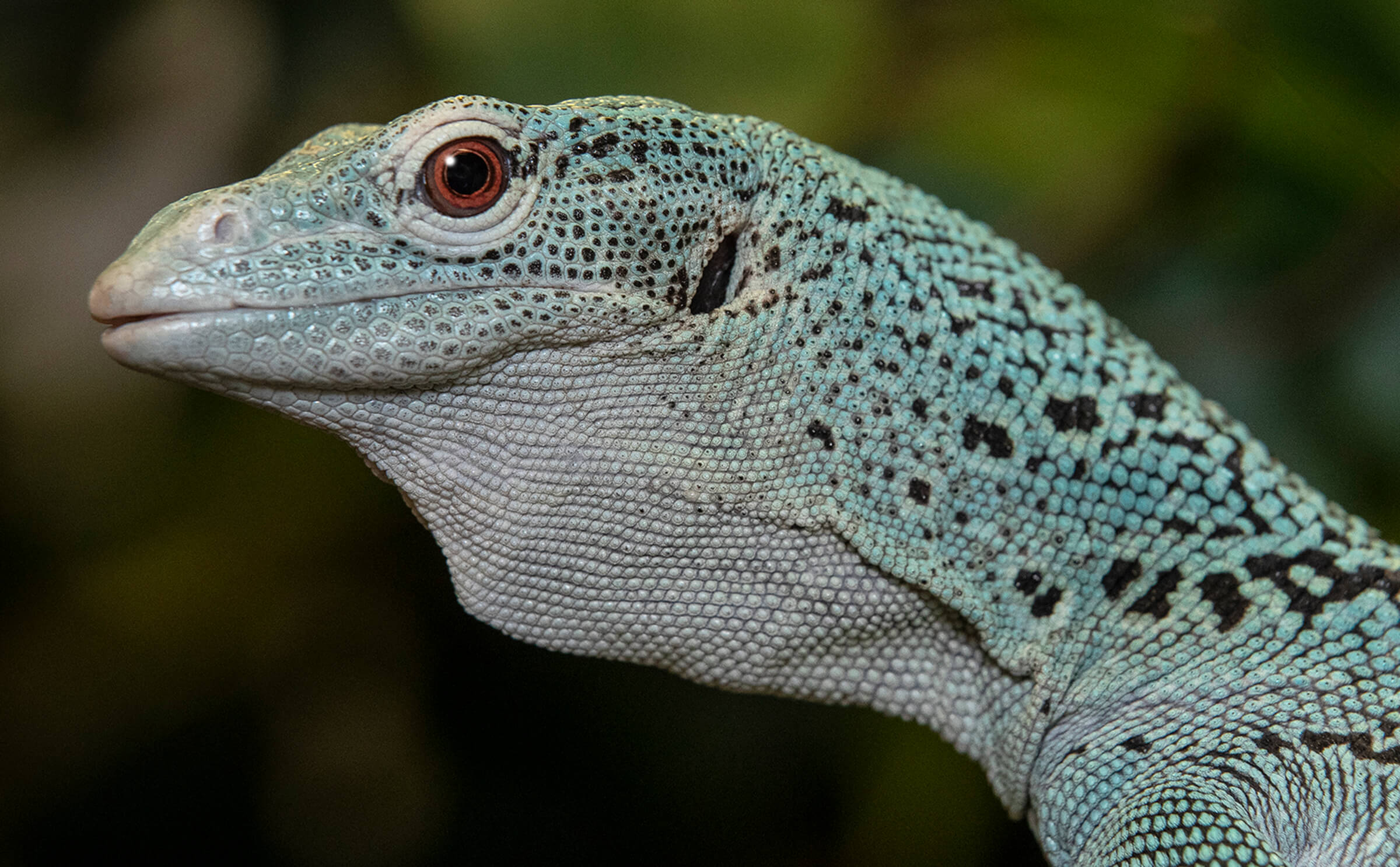 Whether you see one hunting on the ground or up in a tree, it’s obvious that monitors are no ordinary lizards. As you read this, there are over 4,600 species of lizards scurrying over planet Earth, including 60 species that belong to the group known as monitor lizards. This group has the greatest diversity in size of all lizard families. The smallest monitor species measures almost 8 inches and weighs only about half an ounce, while the largest can reach lengths of 7 to 8 feet and weigh over 175 pounds. The latter is also one of the most famous, the Komodo dragon. BEHIND THE NAME
The lace monitor Varanus various is named for the patterns of black and light areas of its scales. It’s also known as a tree goanna.

Dragon? Yes; monitor lizards all belong to the genus Varanus, a word derived from an Arabic word with a root that means “dragon” or “lizard beast.” While they may not fit our fantasy picture of dragons of yore, folks long ago saw these reptiles and named them based on the impression they made.

While we’re pondering human-bestowed names—why “monitor”? Once again, the name ties to what humans observed: some varanids regularly stand upright on their hind legs and look around, “monitoring” their surroundings. From there, other species with the same physical characteristics were placed in the group. Taxonomy is guided by physical features, not behavior. However, even monitor lizards that don’t stand upright have been observed stretching their neck out and up to view their environment. Besides the tendency to take in the view, all monitor lizards can swim—some better than others. In many cases, the tail is a clue to the monitor’s lifestyle. Those that spend a good deal of time in the water, like Australia’s Merten’s water monitor Varanus mertensi have a tail that is strongly compressed laterally. When hunting for fish, the monitor folds its legs back and uses strong sweeps of the tail to swiftly power through the water. Active during the day, most monitor lizards are determined hunters. Almost all are strict carnivores, but some species, like Gray’s monitor Varanus olivaceus of the Philippines, eat fruit as well when they reach adulthood. We’re fortunate two of their favorite fruits are part of the landscape at the San Diego Zoo; our animal care specialists collect date palm fruit and figs from trees on grounds. Since the fruits come ripe in large numbers, we’re able to freeze some for the off-season. ON THE GO
Monitor lizards flick their tongue to pick up scents as they move through a habitat. Because of the way their body twists side to side, constricting the lungs, they often move quickly with the mouth wide open to gulp air, a behavior called gular pumping (upper left corner).

In their native habitat, monitor lizards feast when the resources allow. Excess calories are stored as fat in their tails, ready to use during the dry season when food may not be readily available. Observe a food-seeking monitor and you’re almost certain to see its forked tongue flicking forward. Like snakes, monitor lizards gather scent and taste particles on their tongue. Pulled back into the lizard’s mouth, the tongue transfers the chemical signals to a spot in the roof of the mouth, which carries the information to the brain. No matter the meal they seek, monitor lizards move surprisingly fast when they find food, with the help of many adaptations, but one that is particularly interesting. For most air-breathing vertebrates with two lungs, flexing the body sideways makes it difficult to breathe and move at the same time, a phenomenon called Carrier’s constraint. Watch a lizard in your back yard and you’ll probably see it scuttle, then stop, scuttle, then stop again. Those pauses give it a chance to take a breath. Yet monitor lizards in pursuit of prey use gular pumping: opening the mouth and throat to gulp air. Specialized bones in the throat create a space to store the air. When the monitor closes its mouth, the air is forced into the lungs. The result is increased stamina.

I SPY
Monitor lizards, like this Komodo dragon Varanus komodoensis get their common group name from their behavior of stretching the neck up high and looking around to “monitor” their surroundings. When traveling, they keep their head (and senses) lower to the ground.

Not all monitor species are the go-get-‘em type. Juvenile Komodo dragons actively pursue prey, but adults are ambush hunters. While they follow scent trails to areas where their prey (mostly deer) are gathered, mature Komodos wait until one is close enough to lunge toward. Once bitten, prey may be able to escape, but that doesn’t mean it’s safe—they often expire soon after, and the Komodo follows the scent trail to the meal. Whether it’s the powerful bite or something else is a question scientists are still stalking. “It’s been thought recently that Komodo dragons may have venom,” explained Brett Baldwin, associate curator of Herpetology and Icthyology. “Their saliva does contain components similar to snake venom, an anticoagulant and something that drops blood pressure, but the jury is still out.” Solitary by nature, monitor lizards only seek out others of their own species during mating season. Females deposit anywhere from 7 to 35 soft-shelled eggs in a protected nook. For a tree monitor, that may be a hollow in a trunk. Other monitor mothers use their powerful claws to excavate burrows in river banks, and some dig holes in the side of termite mounds. The termites repair the damaged wall, and the monitor lizard’s eggs incubate in a temperature- and humidity-controlled environment. TREES, PLEASE
Green tree monitors Varanus prasinus are native to New Guinea and adjacent islands. They live in palm stands, where their prehensile tail helps them keep a grip. They are one of the few monitor species that display a primitive social behavior; they often live in small groups made up of a dominant male, a few other males, and several females.

Once eggs hatch, young monitors care for themselves. Since they usually hatch during the wet season, food is plentiful. Their good vision and keen sense of smell help them find the insects, worms, and other small prey they need to grow. But they also have to use both vision and smell to stay out of the way of the raptors and snakes that feed on the hatchlings. It’s estimated that only about one third of young monitor lizards survive their first year, and those that do have other hurdles to overcome before reaching the ultimate goal of any living organism—spreading its genetic material. Beyond the everyday survival challenges of finding food and water, small monitor lizards are prey for some larger animals. And monitor lizards of all sizes and ages are hunted by humans for a variety of reasons.

SMALL BUT MIGHTY
Pilbara rock monitor Varanus pilbarensis is a small monitor growing to about 20 inches from snout to tail tip. It is found in a small area of northwestern Australia.

A long running, large-scale exploitation for monitor lizard skins has had a strongly negative effect on some populations. Additionally, over the past few decades, these reptiles have become highly sought after in the exotic pet trade. The Convention on International Trade in Endangerd Species of Wild Fauna and Flora classifies most monitor lizards as possibly being threatened with extinction unless trade is controlled. The future of these unique, intelligent lizards requires protection—and monitoring.