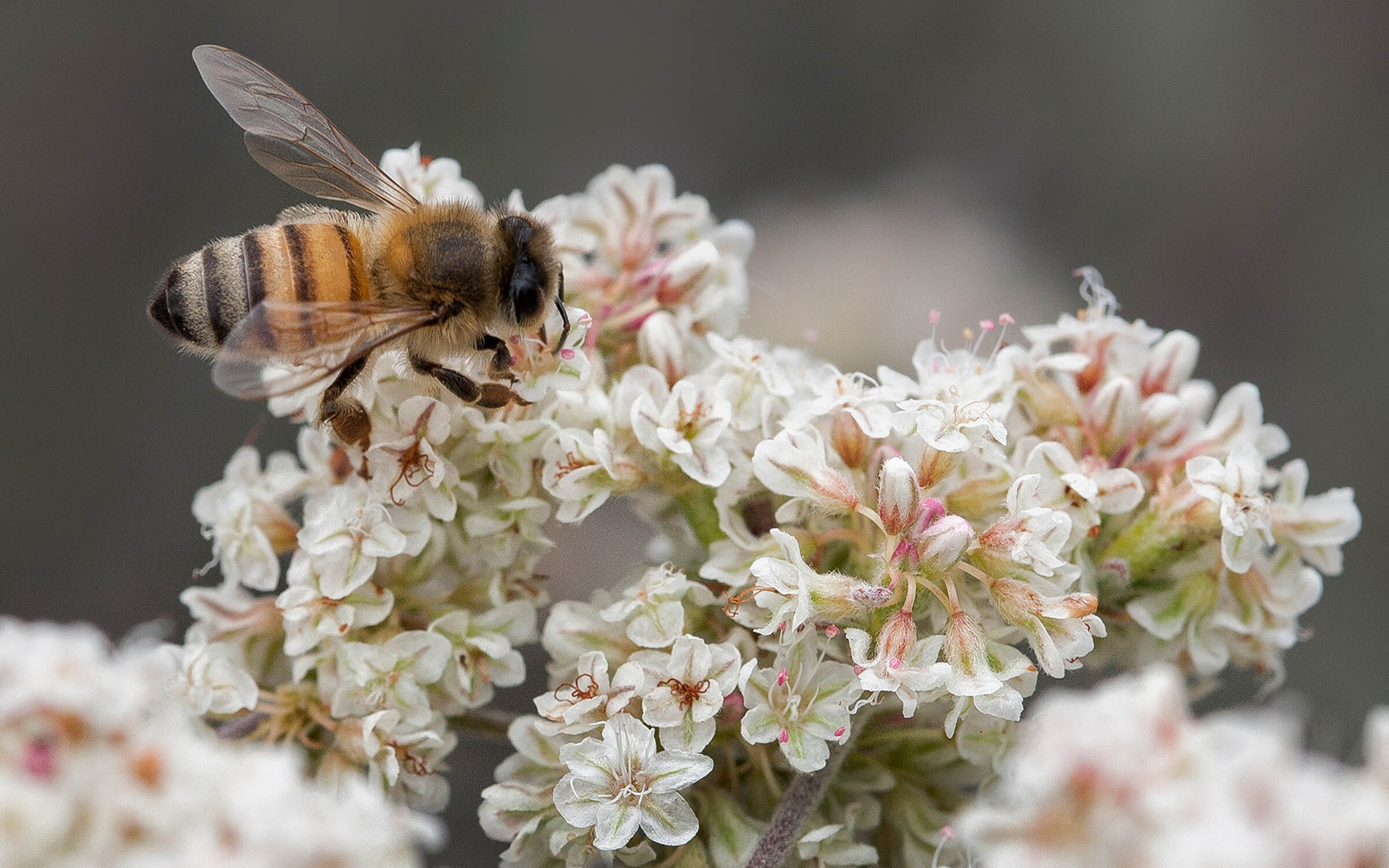 Southern California offers a range of unspoiled natural habitats that are home to hundreds of native plants and animals. Parks, preserves, canyons, and trails invite us to escape our neighborhoods and office buildings. One of the best places to rediscover the diversity of SoCal native plant communities is in a place better known for exotic animals: the San Diego Zoo Safari Park.

The Safari Park’s Nativescapes Garden is a celebration of plants that originated in Southern California long before populations—and parking lots—sprawled. The garden is managed by the Lake Hodges Native Plant Club, and James Dillane serves as its curator. An original member of the garden’s development team in the 1980s, Dillane says he is still fascinated by “the stunning diversity of plants, and their amazing adaptations.” Come along, and get to know the natives. Most San Diegans live in a wide swath of low-elevation land not far from the coast. Here, a layer of cool, moist air from the sea (the marine layer) penetrates warm canyons and foothills, providing ideal conditions for the low-growing coastal sage scrub plant community. Perennials that grow here are adapted for long, hot, dry summers; most of the area’s 10 to 20 inches of annual rainfall comes in winter. Cactuses swell with winter rain that will last them throughout the year. On the other hand, some plants take a “time out” during the summer, going dormant until the rains return. COOL AND SHADY
Left: Trees like willows Salix, western sycamore Platanus racemosa, and California laurel Umbellularia californica are common riparian residents that provide cover for shade-loving shrubs, vines, and ferns. Center: Mulefat Baccharis salicifolia is a year-round bloomer in riparian habitats. Right: The small white flowers of the California blackberry Rubus ursinus develop into berries that feed native herbivores. Though similar to the invasive Himalayan blackberry R. armeniacus, which has naturalized in many parst of California, leaflets of the native blackberry grow in threes. (The invader has leaflets that grow in fives.)

A RIVER RUNS THROUGH IT

Dip into one of the cooler, shaded canyons amid coastal sage scrub, and you may find a gentle stream like the one that winds its way through the Nativescapes Garden’s riparian habitat. Although the term riparian generally refers to year-round proximity to a river or stream, these communities also flourish around underground water sources, as well as lakes and reservoirs. Willows Salix, sycamore Platanus racemosa, and California laurel Umbellularia californica provide cover for shade-loving shrubs, vines, and ferns. Higher up SoCal’s rocky, gravelly slopes, the plant community changes. This is chaparral, a term that comes from the Spanish adjective achaparrado, meaning “stumpy.” It’s a reference to the short, compact trees that grow in this habitat. (Another name for chaparral is “elfin forest.”) Still, chaparral is notably taller—and denser—than coastal sage scrub. “If it’s more than chest-high, and you can’t walk through it, it’s probably chaparral,” says Dillane. Fortunately for us, the Nativescapes chaparral offers visitors a wide path through the elfin forest. Chaparral plants are often tough and woody, with small, leathery leaves and deep roots. While several types of chaparral can be described based on their dominant plants, they share space in the Nativescapes Garden. Scrub oaks Quercus berberidifolia spread their branches near California lilacs Ceanothus, big-berry manzanita Arctostaphylos glauca, chamise Adenostoma fasciculatum, and sugarbush Rhus ovata. MAKING THE BEST OF A BAD SITUATION

Certain spots in the foothills are noteworthy for their particularly poor soil. “The usual native shrubs are at a disadvantage here, but that makes it possible for other, more specialized plants to colonize these areas without competition,” says Dillane. Chief among them are cypresses, and in San Diego, that’s the Tecate cypress Hesperocyparis forbesii and the Cuyamaca cypress Hesperocyparis stephensonii. SPRINGTIME IN THE FOREST
Clockwise from top: In the montane garden, the western redbud Cercis occidentalis bursts into bloom in late winter, before it grows green leaves. The flowers of a hollyleaf cherry Prunus ilicifolia give way to small cherries that provide a feast for native birds. A stroll through the montane garden passes oak trees Quercus and showy penstemon Penstemon spectabilis.

THE HILLS ARE ALIVE

On hillsides and ridges at the top of the Peninsular Range, plants get more rain—about 20 to 30 inches, some in the form of snow. The Nativescapes montane garden brings this plant community to our level. Shady oaks stand beside incense cedar Calocedrus decurrens, Coulter pine Pinus coulteri, and mountain mahogany Cercocarpus betuloides. Descending the eastern slopes of the Peninsular ranges—the desert side—is a landscape known as desert transition. Pinyon pines Pinus monophylla and P. quadrifolia make the most of fog and clouds to capture moisture, and California junipers Juniperus californica are laden with berries the size of jawbreakers. The typical southwest desert transition community is pinyon-juniper woodland, but Dillane—who says it’s his favorite SoCal plant community—explains that in California, it’s more complicated than that. “It’s an interesting mix. You might see some plants typical of the chaparral, desert, montane, and even coastal areas—as well as its own characteristic plants.” And many of these plants are not widespread, but found in small patches that provide just the right conditions. DESERT DWELLERS
Clockwise from left: The aptly named teddy bear cholla Cylindropuntia bigelovii may look fuzzy and huggable, but don’t be fooled! It’s also known as “jumping cholla” for the way it seems to lunge at nearby arms and legs. The striking, scarlet flowers of a Mojave hedgehog cactus Echinocereus mojavensis are pollinated by hummingbirds. The blue-gray flowers of desert lavender Condea emoryi rise above its soft gray foliage.

Across the Peninsular Ranges from San Diego—at elevations mostly under 2,000 feet—is the Sonoran Desert. To the north, the landscape transitions to the higher-elevation Mojave Desert. Deserts are hot, dry places where temperatures can soar as high as 120 degrees Fahrenheit; but deserts can also get very cold at night. Many desert plants have tough leaves or succulent stems for storing water for the dry times. Some go dormant during dry times and spring to life whenever a rainstorm comes along. In the Nativescapes Garden, they burst into bloom in late winter and spring. ISLAND LIFE
Clockwise from top: Greene’s dudleya Dudleya greenei is endemic to California’s Channel Islands. California rockflower Crossosoma californicum grows on San Clemente and Santa Catalina Islands, as well as Mexico’s Guadalupe Island and a single location on the mainland. The island morning glory Calystegia macrostegia that clambers and rambles over trees and shrubs can be found on the mainland coast as well as on the Channel Islands.

In the garden’s Channel Islands habitat, many of the plants are island endemics—known only from their island populations, and occurring naturally nowhere else—including Santa Catalina Island manzanita Arctostaphylos catalinae, found only on Santa Catalina and Santa Cruz islands. Because they develop in isolation, island endemics have traits that are different from their counterparts on the mainland, and they are genetically distinct.

FORM AND TEXTURE
The Santa Cruz ironwood Lyonothamnus floribundus aspleniifolius is native to several of the Channel Islands. Its fern-shaped leaves and stringy bark make it an interesting addition to a SoCal garden. BECKONING BUTTERFLIES AND BEES
The white flowers of California buckwheat Eriogonum fasciculatum that dot coastal sage scrub habitat are also a good choice for pollinator gardens, where they attract bees (like the one at the top of this article) and butterflies.

“I want people to know that natives can be spectacular, and many can make good garden plants,” says Dillane, who calls the garden a “place of education.” Because many plants have ID signs, “You can see a plant’s name and know what you’ve been seeing on your hikes. Or, next time you see one, maybe you’ll recognize it.” We hope this peek at the Nativescapes Garden inspires you to explore these plants in the wild, to plant natives in your own yard, or just to bask in their beauty at the Safari Park. Going native is the way to go! 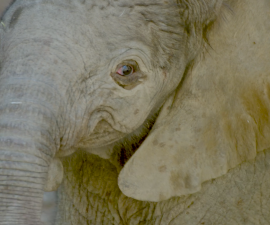 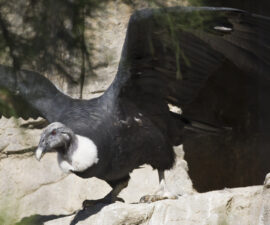 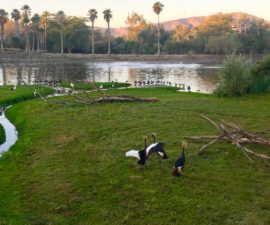