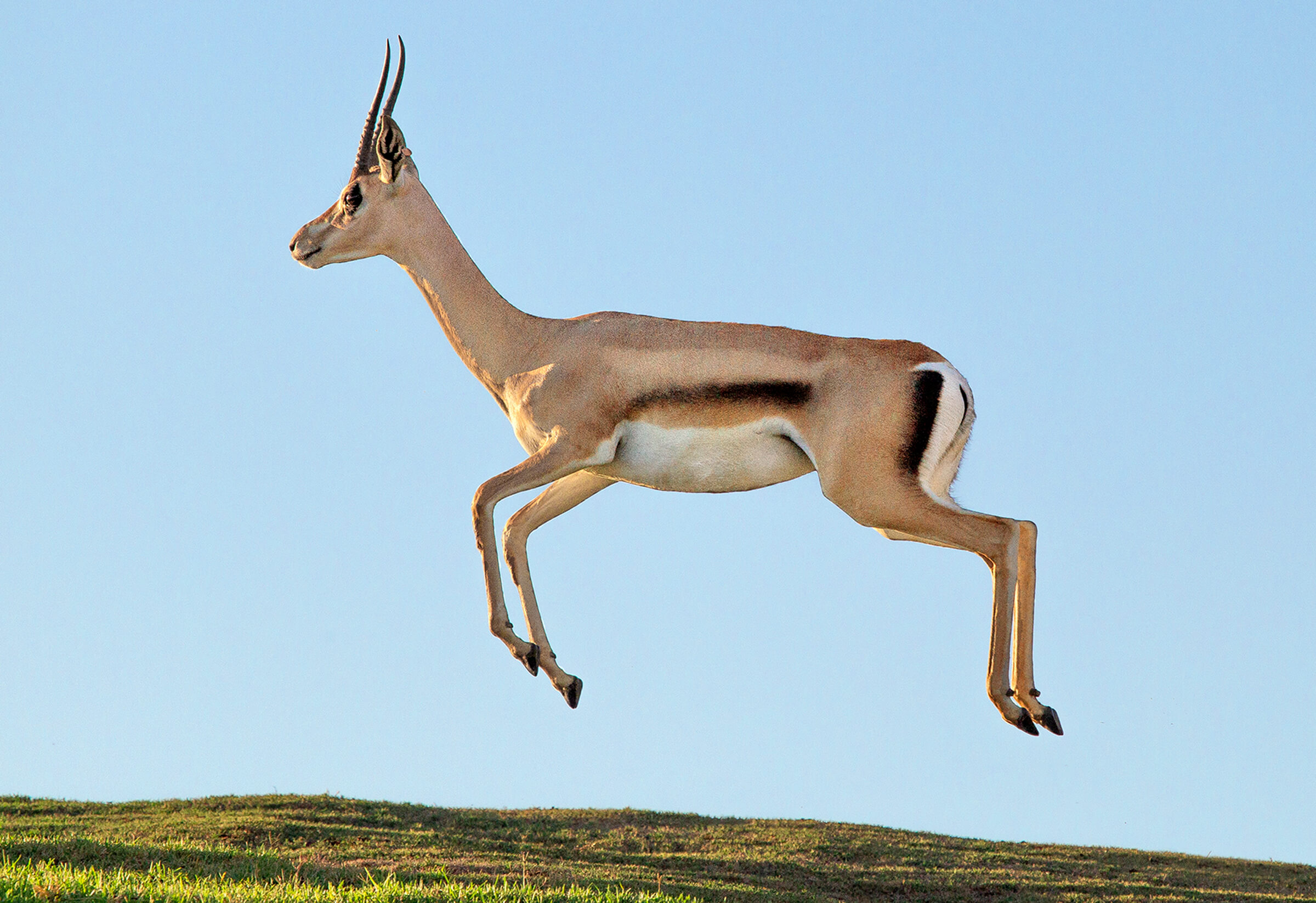 “The gazelles so gentle and clever Skip lightly in frolicsome mood.” —Heinrich Heine

Fleet of foot and amazingly agile, the gazelle has been as adept at catching the interest of poets and writers as it is at avoiding predators. It is revered by some cultures, and its likeness can be found in prehistoric artwork. Even the origin of the name is intriguing: the Arabic word gazaal, meaning “graceful doe,” is one inspiration. Others find influence in gazal, a term for “sweet-talk” or “to flirt,” which appears as a symbol of love and beauty in Persian love poems.

But no matter where their name comes from, there is one thing that the people who know them best do not call them. And Matt Gelvin, a lead animal keeper at the Safari Park, is one of those people. “They aren’t deer,” Matt says firmly, dispelling a common misconception. “Plus, all gazelles are antelope, but not all antelope are gazelles—gazelles are a very interesting group of their own.” Currently, it is thought that there are about 18 species in the genera Gazella, Eudorcas, Antidorcas, and Nanger that are considered gazelles—although animal family trees can expand and retract, depending on how the taxonomy tug-of-war turns out. It surely can’t help the gazelle classification quandary that in many countries in northwestern sub-Saharan Africa, the gazelle is commonly called dangelo, meaning “swift deer.” You can see how the misconception came to be. HORN HAPPY
Both sexes of dama gazelles usually have medium-length ringed horns curved like an “S.” Males’ horns are about 14 inches long; females’ horns are much shorter.

All gazelles do share some characteristics. These slender, graceful antelope make their homes throughout Africa and Asia. They are light and swift, which helps with quick getaways from predators such as lions, cheetahs, leopards, jackals, hyenas, crocodiles, and, yes, humans. Gazelles have small heads, large eyes and ears, and narrow muzzles. They also depend on their strong senses of hearing, sight, and smell to make up for their vulnerability in their wild habitats. Gazelles are usually tan or reddish brown in color and they have distinctly ringed, curved horns. Adult male gazelles sport long horns that are typically marked by 20 rings and curve backward. Female gazelles may either have small, short horns or no horns at all. There are little gazelles and big gazelles. The Speke’s gazelle Gazella spekei, from the Horn of Africa, is the smallest: full-grown adults only hit about 44 pounds. Its diminutive size isn’t this ungulate’s only claim to fame: it also wins for most noteworthy nose! Just behind the nostrils are three to five folds of skin, which lie across the bridge of the nose and can be inflated into a sac the size of half a tennis ball. These folds inflate when the animal is excited, which aids in making a loud, resonant call the Speke’s gazelle uses to sound the alarm when it detects danger. HONK IF YOU SEE DANGER
When alarmed, the Speke’s gazelle can inflate the loose skin on the top of its muzzle, increasing the volume of its call.

At the other end of the size chart is the dama gazelle Nanger dama, found mostly in the Sahara Desert. Also known as the addra or mhorr gazelle, this species can pass 3 feet at the shoulder and weigh up to 165 pounds. Its light coloration and white head, legs, and rear are adaptations to living in a hot climate, reflecting sunlight away from the body. When it comes to food, the dama gazelle believes in standing up for itself. When it spies out-of-reach vegetation, the determined dama stands up on its hind legs to get what it wants—no matter how tricky it is to reach, food is not something to pass up in a harsh desert habitat. Despite its hardiness, however, the dama is the most endangered gazelle species. A GAZELLE, BY ANY OTHER NAME…
The dama gazelle (also called the addra or mhorr gazelle) is the largest gazelle species, and is also one of the rarest, with fewer than 400 individuals remaining in the wild, mainly in Chad and Sudan.

Should you feel the need for speed, then the springbok Antidorcas marsupialis is your gazelle. The national animal of South Africa, the springbok can run an impressive 55 miles per hour. The name springbok translates to “jump” and “antelope” or “goat,” and the springbok can leap more than six feet high. This gazelle is adorned with a white face marked by two brown lines from the eyes to the corner of the mouth, long, pointed ears, and lyre-shaped horns, which are carried by both males and females, although they are longer and thicker in males. HORN OF PLENTY
The Grant’s gazelle is tops when it comes to head toppers—its horns can reach 31 inches in length.

And speaking of horns, which species stands head and shoulders above the rest when it comes to headgear? That would be the Grant’s gazelle Nanger granti, which roams its range from South Sudan to central Tanzania with horns that can reach 31 inches in length. Hard to top that! As herd animals, gazelles stay in a group to help watch each other’s backs: the more, the safer, so to speak. But other numbers affect them as a whole. “Many gazelle species are threatened or endangered,” Matt says. He points out that until recently, the Safari Park was the only place in the US to have red-fronted gazelles Eudorcas rufifrons. “They’re critically endangered.”

Matt, and keepers like him, are working to help keep gazelle populations thriving—or at least prevent them from declining. Along with his lead keeper duties, Matt volunteers as the studbook keeper for the Thomson’s gazelle’s Eudorcas thomsonii Species Survival Plan (SSP) program. Another Safari Park keeper, Charlie Tucker, serves in a similar position to help with addra gazelle conservation efforts. Matt believes the studbook work is vital to a comprehensive program. “Each studbook manager records all the births, deaths, and breeding of that species, as well as managing genetics, age demographics, and the locations of the managed population,” he says. “We have an important say in what happens with that animal in facilities all over the US. It keeps all the zoos caring for that species on the same page.” Between the Safari Park and the Zoo, San Diego Zoo Global cares for 11 species of gazelles. When you take the Africa Tram Safari around the field exhibits at the Park, you can see groups of sprinbok, Grant’s gazelles, and Thomson’s gazelles. The Thomson’s—or “Tommies,” as they are often referred to—are the ones Matt considers the most charismatic of gazelles. “They’re feisty and have such big personalities,” he says. ALL TUCKED IN
Mother gazelles hide—or tuck—their babies into secure spaces for safekeeping. For keepers, it’s more like a game of hide-and-seek.

Feeding and checking up on the swift gazelles in the Park’s field exhibits gives their keepers plenty to do. But the animals also make some tasks quite a challenge. “Gazelles are ‘tuckers,’ meaning the mothers hide their babies to keep them safe,” Matt says. “We have to search for those little tan babies that blend in with the surroundings. It can take a while to find everyone.”

At the Zoo, Soemmerring’s gazelles Nanger soemmerringii can be seen in the giraffe habitat at Urban Jungle, and Speke’s gazelles make their home at Northern Frontier. It’s interesting to linger for a few moments at their exhibits and watch the groups’ interactions. After a while, they look quite dear. Just don’t call them deer. 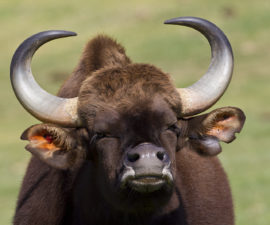 There are some strange and amazing animals in the world. …
May 6, 2019 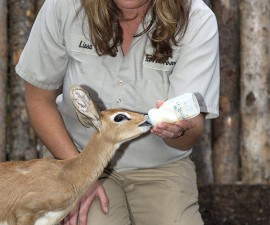 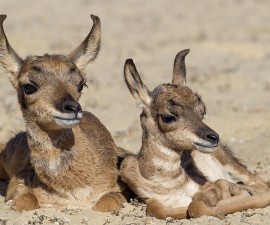