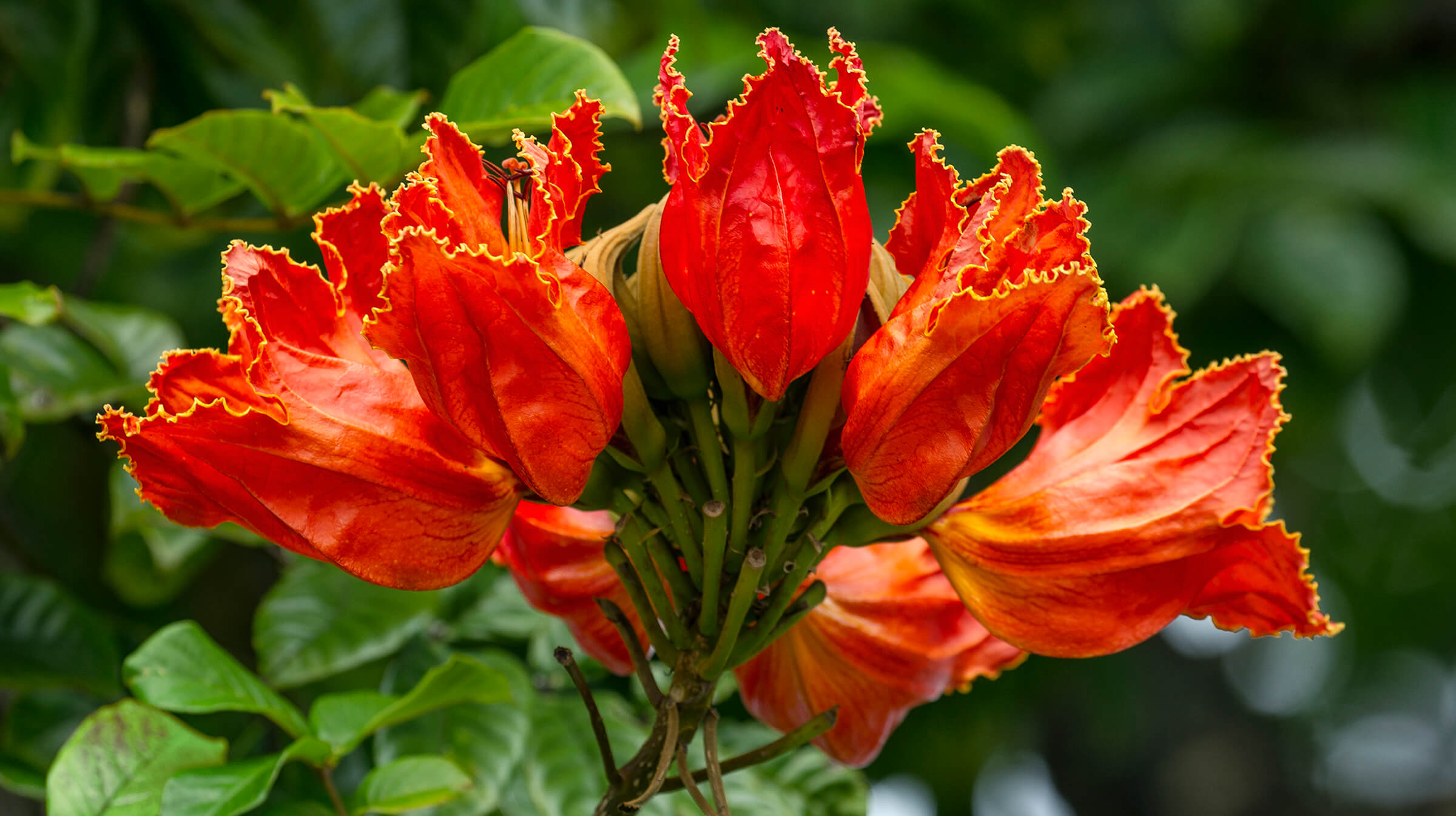 With fiery clusters of blossoms bursting from a lush green canopy, it’s easy to see why the African tulip tree is considered by many to be the most beautiful flowering tree in the world.

The ornamental appeal of the African tulip tree Spathodea campunulata is one reason the tree now shows up in other regions of the world. In addition to its beauty, it’s a fast grower that adds shade and structure to a landscape. Yet, along with these benefits come challenges that are important to consider before planting. BLAZING BEAUTY
No wallflowers here; the blossoms that adorn African tulip trees are truly eye-catching, and last for months.

Reaching a mature height of 60 to 80 feet and more than 25 feet in diameter, this tree needs a good amount of uninterrupted space. In Southern California, the trees usually don’t grow more than around 35 feet tall, but in tropical areas with plenty of moisture, they do hit maximum size. And while it’s considered an evergreen in its native habitat, the African tulip tree is sensitive to cold and may become deciduous, dropping leaves when temperatures drop. HEADS UP
With proper pruning to allow for airflow, an African tulip tree in a home landscape can become a popular place to enjoy the shade.

As the tree grows, newly sprouted leaves have a bronze color. As they mature, they morph to a rich green with a soft, velvety texture, and measure about 16 to 18 inches long. The leaves create the perfect canvas for the pop of brilliant color that bursts forth throughout the blooming season. BEFORE THE BLOOM
The buds of S. campanulata look like tiny bananas growing in a bunch about the size of a baseball. Each horn-shaped bud is filled with liquid; squeeze the bud and someone will be squirted!

Unopened flower buds look like tiny bananas growing in a baseball-size bunch. In Central Africa, each bud contains liquid. It’s a source of moisture for native birds and a bit of fun for children who break them off to squeeze and squirt at each other. The buds contain so much fluid that if a branch is shaken, by a strong wind, for example, a shower of droplets follows. This is how the tree earned another common name: the fountain tree. As the cluster of buds opens, the show begins. As the name “tulip tree” hints, the flowers do indeed resemble tulips. Each frilled flower is about three inches wide and about five inches deep. The intense color of the flowers makes them appear to glow in such a way that “flame-of-the-forest” and “fiery torch” are other common names for this species. LET IT GLOW
African tulip trees are prized for, among other things, the intense color of their flowers, which seem to glow.

African tulip trees have a long blooming period of around five months, providing long-lasting beauty. While the thick, fleshy blooms last a long time, eventually they drop to the ground. Because they can create quite a mess, formal gardens tend to keep these trees away from well-traveled paths. BEFORE YOU GO…
The stigma of an African tulip tree blossom guards the entrance/exit to the flower’s nectar deposit. As insects and birds attempt to reach nectar—and as they depart—they brush against the stigma, pollinating the plant.

Another reason to give this tree plenty of elbow room is the tendency for its branches to break off. The wood is soft, and as the tree grows, some branches are unable to support their own weight. In a home or garden landscape, careful pruning can help avoid surprises, but even when this happens in a wild habitat, the tree recovers quickly. ABUNDANT AMBROSIA
Brightly colored flowers in broad clusters draw nectar-seeking birds and insects like a magnet. As they feed, they unwittingly aid the plant by serving as pollinators.

Eye of the Beholder

Once people began adding S. campunulata to their gardens in temperate and tropical spots around the world, a paradox was revealed. Under many conditions, African tulip trees do well. Under some conditions, such as those in the Pacific Islands and Queensland, Australia, they do too well. Each seed pod releases around 500 thin seeds with papery wings, which the wind carries for a distance. With plentiful rainfall and warm temperatures, the seeds germinate, and the next generation thrives. Because of their rapid growth and tenacity, they have invaded natural ecosystems, outcompeting native vegetation at an alarming rate. The International Union for Conservation of Nature includes this tree on its published list of 100 of the World’s Worst Alien Species. ROBBED!
The hole in the base of this flower was likely made by a nectar-robbing bird or insect. “Breaking in” through the side—instead of reaching in through the top—saves the animal time, but deprives the plant its pollination “payment.”

However, what might seem to be negative attributes—rapid growth and tenacity once a roothold is established—are positives under the right management. Where African tulip trees are plentiful, they are harvested for food and medicine. The soft wood is sought for carvings, and the trees themselves are planted for soil conservation and reforestation projects. It’s truly a tree of many faces!