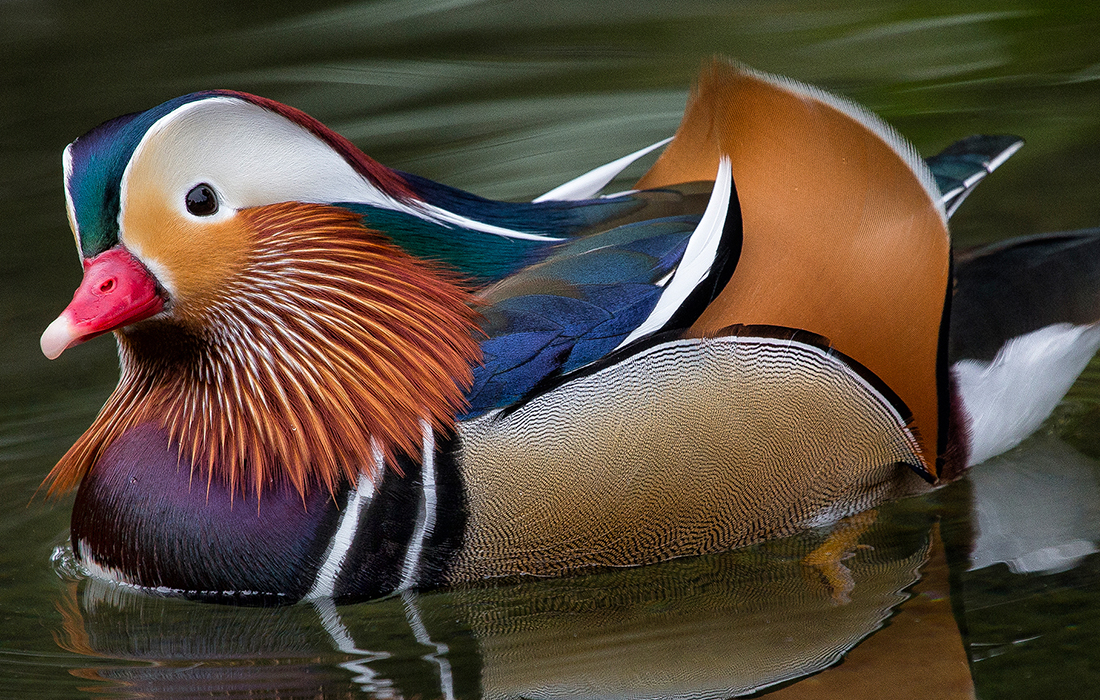 The Animal Kingdom has an extraordinary color palette. Pick any color on the spectrum, and there is an animal somewhere that displays it to excellent effect. Some animals are kaleidoscopic wonders, like the mandrill, the Gouldian finch, the male red-headed agama lizard, and the male mandarin duck. Others are more subdued in hue but make a statement with bold patterns. What mechanisms are at work to create this riot of color? As it turns out, animal color both is, and is not, just skin deep. Chemical compounds known as pigments are responsible for much of the color in living things. Pigments absorb light and reflect back certain wavelengths, such as blue or red; what is reflected is the color we see. A fundamental part of color in hair, skin, feathers, and scales is the pigment called melanin produced by the body. There are two types of melanin: eumelanin, which produces black and brown colors, and pheomelanin, which produces red and orange colors. Genetics determines how much of these the body produces. The more eumelanin there is, the darker hair and skin will be, as in gorillas and black cobras. Less eumelanin means that varying amounts of pheomelanin can come through, resulting in combinations from the reddish-brown coat of a roan antelope to the bright-red hair of an orangutan. SUMATRAN ORANGUTAN
PONGO ABELII
The glorious orange-red locks of this great ape are the result of a predominance of the yellow/red pheomelanin pigment; in contrast, gorillas have mostly the brown/black eumelanin pigmentin their hair. There’s another force at work in primates as well: a hormone regulates the amount of each pigment that is produced. If more of the hormone is present, it binds to the cells and activates the production of more eumelanin; less of the hormone results in pheomelanin being produced.

What about when there are dark colors right next to light colors, as in tigers? That’s genetics at work: the code directs the deposit of more eumelanin in the hair that forms the dark stripes, while the rest of the hair has less eumelanin to let the reddish pheomelanin shine through. And white has little or no melanin—completely white-looking hair, like that of the polar bear, is colorless, but we perceive it as the color white. Some Are What They Eat

Plants are even more colorful than animals; through photosynthesis, they make their own carotenoid and porphyrin pigments, resulting in yellow, orange, red, green, and even violet. Animals don’t make carotenoids or porphyrins, but they do eat plants—or other animals that have eaten plants. The pigments they ingest can be metabolized and deposited into feathers, scales, and skin. The algae and crustaceans that flamingos eat produce their rosy hue, and seeds and berries give canaries and goldfinches their golden glow. THICK-BILLED PARROT
RHYNCHOPSITTA PACHYRHYNCHA
These parrots are this shade of green because of a combination of factors. First, melanin in the cells of their feathers produces a reddish-brown color. Second, they eat plants containing carotenoids, which are pigments that produce yellow colors, that are deposited in the feather cells. And third, blue light reflects off the feathers. It’s the interaction of all three that results in the green we see.

This effect is most pronounced in birds, but it can occur in other animals as well. Invertebrates such as insects and mollusks display yellow, green, red, and purple colors from pigments they absorb through their diet. And if you’ve ever eaten way too many carrots, you may have noticed that your skin temporarily takes on an orange tinge where the carotene collected.

It Isn’t Easy Being Green

Why are there so many green reptiles and amphibians? As an adaptation, their color helps camouflage them in the leafy environments where many of them live, of course. But how do they go about being green?

As it happens, their skin is even more complex than that of mammals and birds. It contains pigment-bearing cells called chromatophores, which occur in three layers. The top layer holds yellow and sometimes red pigments, the middle layer contains cells that reflect and refract light, and the bottom layer contains melanin. In a typical green frog, light penetrates to the middle level, where the blue wavelength is reflected back through the yellow pigments in the top layer—with the result that we see green. If an animal is red or orange, like a coral snake or a Gila monster, its top layer contains red pigments, which block the blue light. And a blue poison frog? It has little or no yellow or red pigment in the top layer, so the reflected blue light is what we see. GILA MONSTER
HELODERMA SUSPECTUM
Like other reptiles, Gila monsters have three-layered chromatophores in their skin that produce their color. Unlike many reptiles, though, Gila monsters are not green—and they’re not yellow, either. Their coloration is the result of the dark melanin layer dominating. The black areas have lots of melanin and the lighter areas have varying amounts, which combine with some of the xanthophore layer of yellow/red to produce everything from dark orange to almost pink.

What’s amazing is that some reptiles and amphibians can actively control their colors by expanding or contracting these layers. They can bring the melanin layer closer to or farther away from the skin surface, creating different shades and colors. Some chameleon species have perfected this ability; they can move layers in specific locations on their body to create spots, stripes, and blotches of different colors. The way light reflects and refracts leads to another way to produce color: through structure. The multitude of surfaces, angles, and layers in bird feathers, butterfly wings, insect exoskeletons, reptile scales, and sometimes mammal hair cause light wavelengths to reflect in different ways and different directions. If the majority of the surfaces reflect the same way, we see a solid color, like the bright yellow of butterfly wings or the intense blue feathers of a hyacinth macaw. In reality, the scales on the butterfly’s wings are clear, and the bird’s feathers are dark from melanin, but the reflection creates the color we perceive. BLUE MORPHO BUTTERFLY
MORPHO PELEIDES
Butterfly wings are made up of thousands of tiny scales—and most are colorless. It’s the way that light hits their many surfaces that creates the color we see—in this case, mostly blue light, refracting from many angles to create what our eyes see as shining, shimmering blues.

If surfaces disrupt light wavelengths in different directions and at different speeds (known as interference), it causes the effect of iridescence—to our eyes, it appears that the colors are shifting and changing. A familiar example is the peacock, with his stunning array of greens, blues, and violets, which seem to change color when viewed from different angles. Somehow he knows it, too, slowly shifting his position here and there for maximum effect as he courts a peahen. Color Is in the Eye of the Beholder

In the majority of animals, color is the result of several of these mechanisms working together. The patterns, variations, shades, and markings help animals blend into their environment or stand out to attract a mate or warn a predator. We might look at an animal and think, “Why is it colored like that? It stands out like a sore thumb!” But in its habitat, it blends right in with grasses, trees, and leaf litter or ripe fruit and brightly colored flowers. If it has showy, attention-getting colors, it’s because those colors have served a purpose throughout the course of natural selection, helping the animal breed more successfully or advertise that it is toxic and not good to eat. AMETHYST STARLING
CINANYRICINCLUS LEUCOGASTER
The striking purple on these birds is caused by a combination of pigmentation and structural color. The pigment is melanin, producing varying reddish colors; the structural element is the refraction of blue light scattered by the structure of the feathers. Red and blue together make purple. This is a shimmering, shifting purple, though—the blue light is refracting off many different angles, which creates iridescence.

We should also remember that not all animals see the way we do: a red orangutan disappears in the green forest to an animal with limited color vision, and a deer can’t discern the jaguar in the tree until it moves. Some animals can see colors at the ultraviolet and infrared ends of the spectrum that we can’t. Who knows what colorful shenanigans might be going on there—and we humans are completely oblivious! 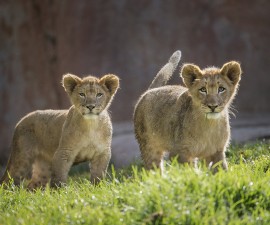 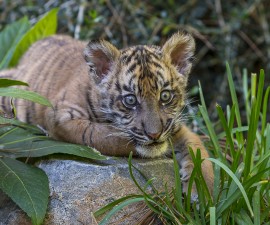