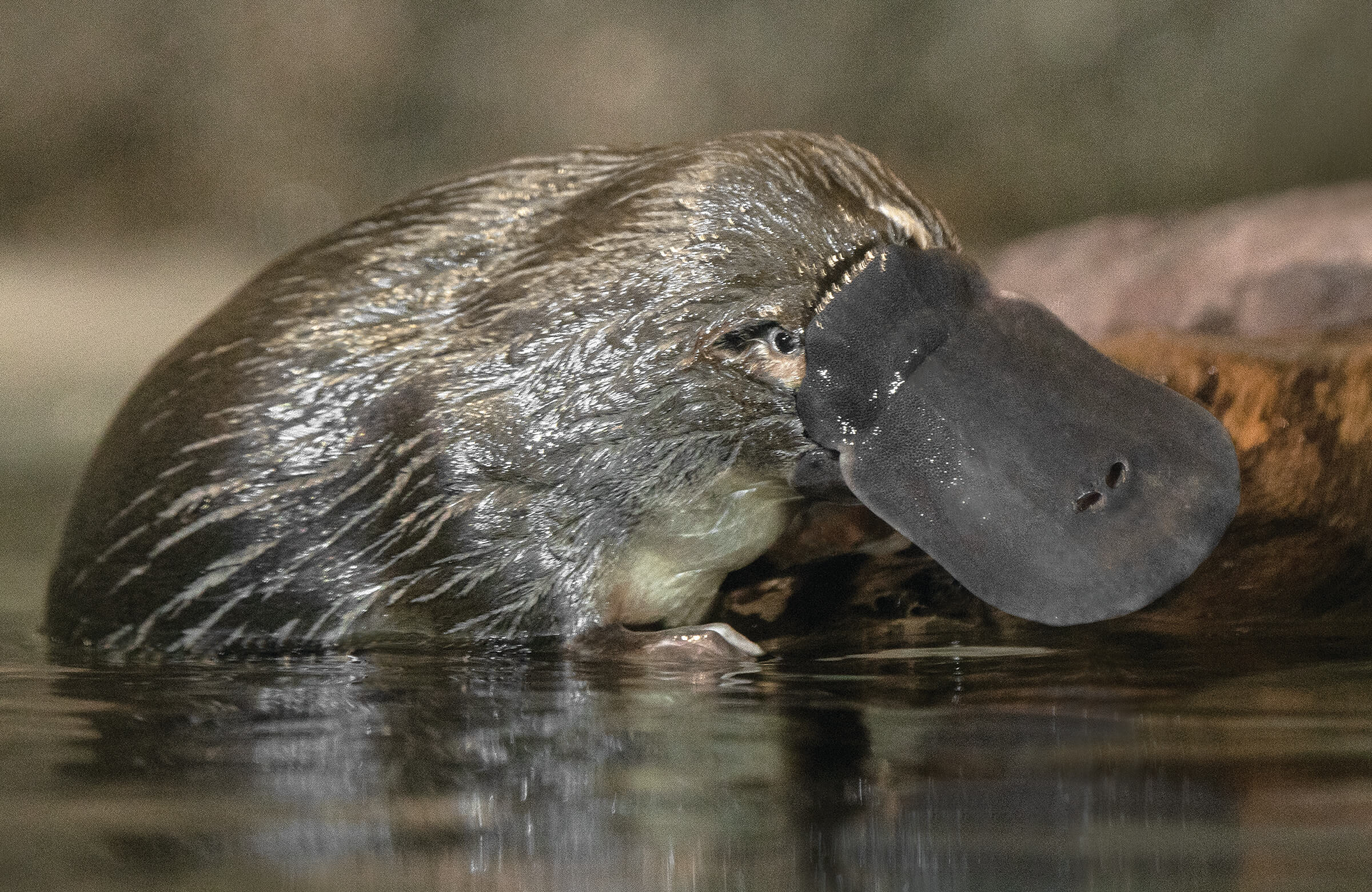 Many people have heard of this unique egg-laying mammal, but even in Australia, few have managed to spot one. That’s partly because platypuses are mostly nocturnal, taking shelter in burrows during the daytime. It’s also because, when they do emerge in the evening, platypuses spend the majority of their time quietly swimming in and under the water.

They’re rarely found in zoos, either. “There are only 20 platypuses in Australian zoos,” says Bob Wiese, Ph.D., chief life sciences officer at San Diego Zoo Global (SDZG), “and now we have the only 2 outside of Australia.” The platypus pair—a female, Eve, hatched at Australia’s Taronga Zoo and a male, Birrarung, hatched at Healesville Sanctuary—just has come to live at the Nelson M. Millsberg Platypus Habitat at the Safari Park. Bob headed up the team responsible for bringing this unique species to San Diego. “San Diego Zoo Global has a long history working with Australia and the Taronga Zoo,” says Bob. “We began working with our partners eight years ago, to develop the policies and parameters necessary for a successful platypus overseas move. A process for platypus export did not exist when we started our discussions. We are honored to be entrusted with these extraordinary animals.” Before the platypuses arrived, Safari Park animal keepers and Meredith Clancy, DVM, veterinarian at the Park, traveled to Australia to learn how to care for them. “They can adapt to many different environments, but we knew it would take them time to acclimate to their new environment after an overseas transport,” explains Meredith. “Experienced platypus husbandry staff also traveled with the animals from Australia, to monitor them during and after the transport. The animals did very well.”

Safari Park senior mammal keeper Luis Ochoa spent eight weeks in Australia, training with the expert platypus keepers at the Taronga Zoo, Healesville Sanctuary, and the Melbourne Zoo. His training covered feeding, care, and handling protocols. Like most of us, Luis had never seen a platypus before. When he finally met one at the Taronga Zoo, “My first thought was that they are a lot smaller than I imagined.” From the rubbery beak to the tip of the pudgy tail, most platypuses are between 16 and 24 inches long and weigh less than 6 pounds. Luis compares their size to a cat—“but without the long legs. They look almost flat, because the orientation of their limbs is different.”

One of a Kind

Even up close, “A platypus’s bill looks as though it’s been glued on,” says Luis. “It feels like a pencil eraser, and you can actually see the pores. They are just weird-looking animals—they look artificial.” That’s exactly what the first European scientists to see a platypus specimen thought—they initially considered it a hoax. “I can honestly say that in spite of all the time I spent with them, the novelty has not worn off,” Luis says with wonder and affection. Meredith agrees. “Platypuses have so many fun things that make them a little lizardy, a little bird-like, and a little mammal-like. They’re a little of everything—all at once, and their very own unique thing.” “one important thing I learned was how to safely handle male platypuses without getting envenomated,” says Luis. Platypuses—males, anyway—are venomous. On each of its hind ankles, an adult male has a tiny spur that’s connected to a venom gland. Venomous spurs are an adaptation for male combat during the intense competition for females during the breeding season. To envenomate, a platypus wraps its hind legs around its rival and drives in its sharp spurs.
In a human, injury causes swelling, fever, and nausea—and reportedly it hurts like the dickens. There’s no antivenom—the only treatment is for pain relief. (There’s never been a fatality, though.) So, picking up and handling a male platypus takes know-how. Males and females look very much alike, so the key to staying safe, says Luis, “is to treat each individual like it’s a male. If someone gets envenomated, it’s usually because they assumed the platypus was a female when it wasn’t.” In 2016, the International Union for Conservation of Nature (IUCN) revised the conservation status of platypuses from Least Concern to Near Threatened, and more recent research suggests that the platypus population is continuing to decline. “San Diego Zoo Global has been following the platypus decline for some time,” says Randy Rieches, director of Collections Husbandry Science at the San Diego Zoo Safari Park. “We’ve been disturbed to see that this amazing species now needs increasing conservation attention.”

To learn more about the elusive platypus and threats to its survival, SDZG has teamed up with the University of Melbourne and cesar (an Australian science-based environmental research and consulting company) in the largest-scale investigation of platypus populations in history. “We want to work with our colleagues in Australia to help keep this unique animal from becoming listed as an endangered species,” says Randy. PLATYPUS RESEARCH
In a related project, researchers set up specialized nets that will temporarily trap platypuses.

“We are two years into a three-year project,” explains Bob. “Researchers are comprehensively mapping the current distribution of platypuses.” They are doing so in an innovative way, analyzing water samples from hundreds of waterways in southeastern Australia to identify traces of DNA. While it may be hard to see a platypus, all animals leave traces of their DNA behind—in skin cells, hair, feces, or mucus, for example. Water samples contain traces of this “environmental DNA” (eDNA), and with this noninvasive method, researchers can create a spatial map of the species that are found at the sampled sites. THANKS FOR HELPING!
After carefully examining a platypus, a researcher gently releases it. The information the researchers learn will be cross-referenced with environmental data gathered from the same waterways.

In another project, researchers with cesar and the University of Melbourne are using specialized, no-harm nets to briefly catch platypuses, measure them, examine their overall health, and quickly release them. This information will be cross-referenced with eDNA samples. The goal of both projects is to help people better manage waterways to protect platypuses and other species that share the habitat.

“I feel extraordinarily lucky that I get to work with these animals,” says Luis. Thanks to SDZG’s partners in Australia, now Safari Park visitors from the US and around the world—who will likely never see a platypus in the wild—can learn about the animals’ fragile state in their native habitat, and the importance of maintaining their survival as a conservation priority. Down Under in San Diego

The new Nelson M. Millsberg Platypus Habitat in the Safari Park’s Walkabout Australia was specifically designed for the platypus’s lifestyle. Because these animals forage in the shallow water of streams running over stones and gravel, the habitat features water moving over heavy sand and cobblestones, a gentle waterfall, and tangled logs for exploring and climbing.

Because platypuses are nocturnal, the habitat is on an opposite daylight schedule. Inside, lights get brighter in the evening, cueing the animals that it’s time to curl up inside a burrow. As Park visitors arrive in the morning, lights dim to nighttime levels, a sign for the platypuses to come out to explore and forage. It might seem a little dark for human vision, but it’s better for the welfare of the platypuses. WATER IS LIFE
Platypuses live in freshwater ecosystems of eastern Australia and depend on them for their aquatic lifestyle.

Their diet at the Safari Park consists of crayfish, bloodworms, mealworms, fly pupae, and fly larvae. Through the viewing window, visitors can watch the platypuses swim, play, and hunt both above the water and underwater. 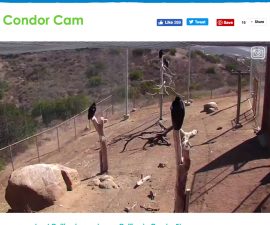 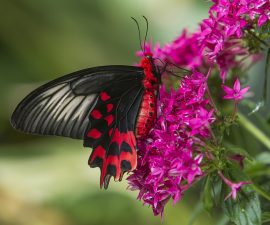 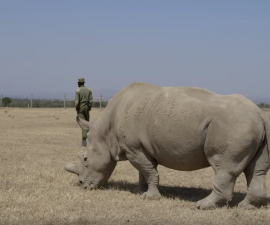