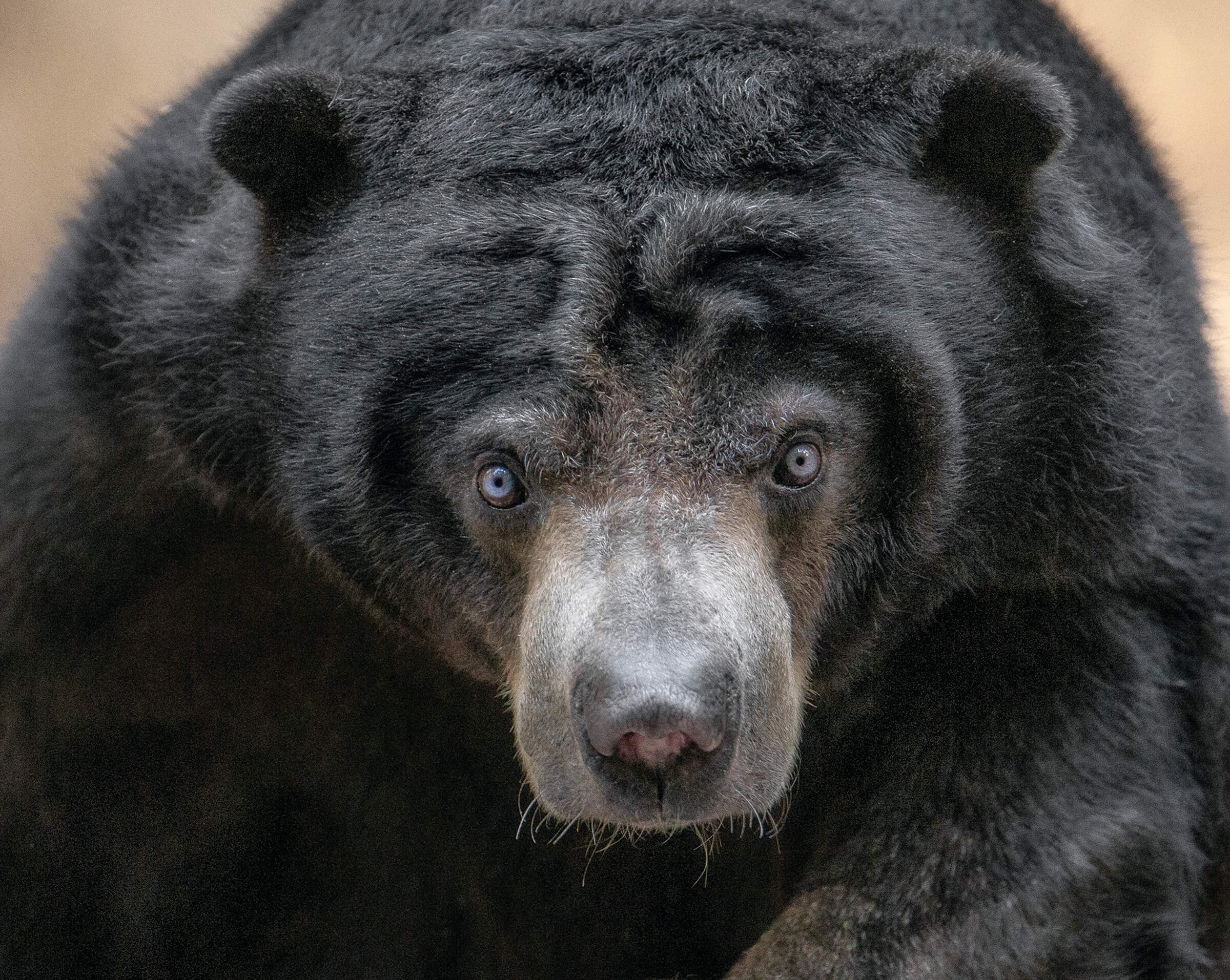 The smallest and least studied of the eight bear species, sun bears inhabit a fragmented range, spread over 10 (possibly 11) different countries, all in fragile regions of Southeast Asia. I have been fortunate enough to care for these bears starting at the onset of my career as a wildlife care specialist in 1991. Malayan sun bears Boysen Bear and Drasana were the first sun bears I met. Soon, I was observing the mischievous nature of their cub Elvira. The San Diego Zoo’s story with these bears goes much further back. 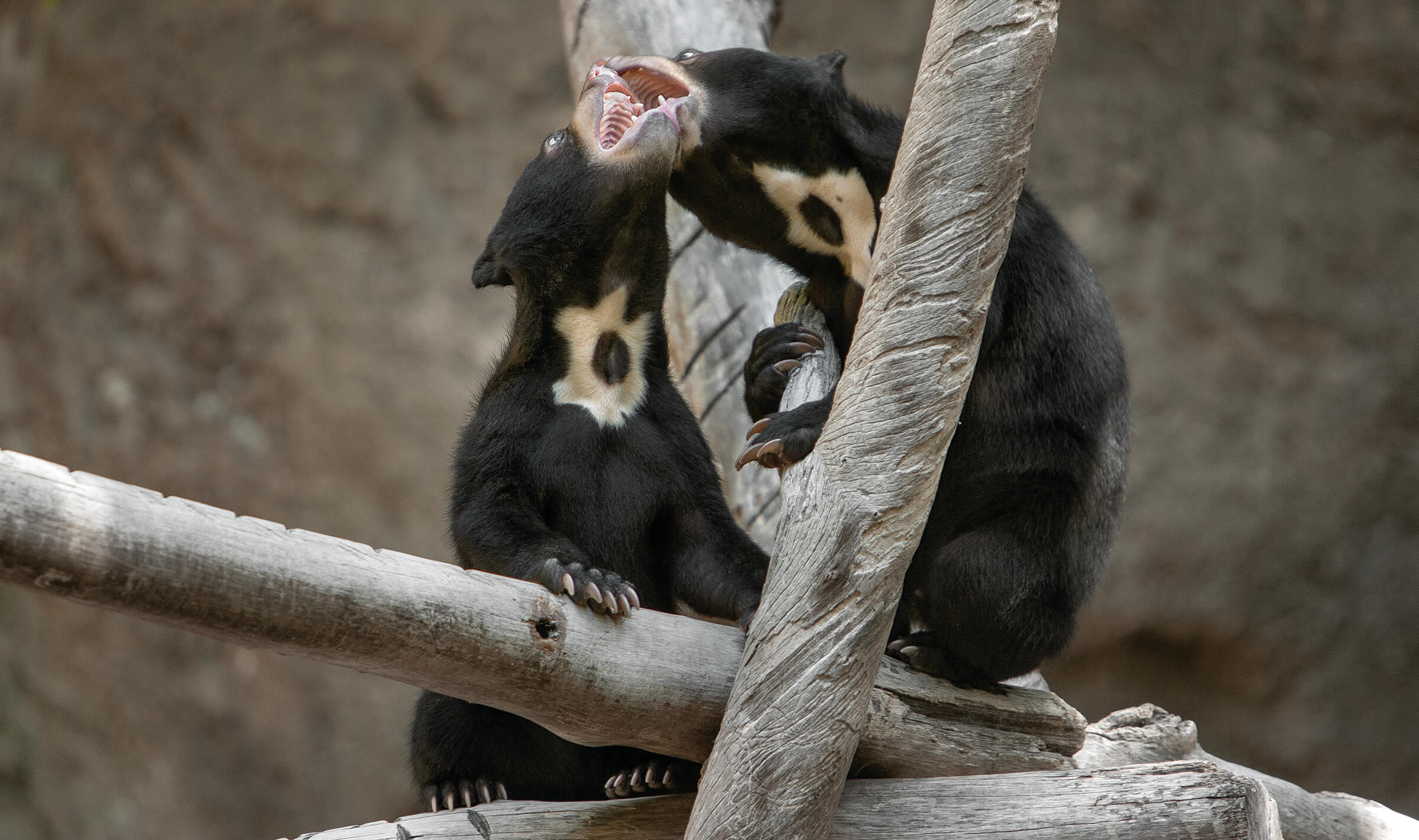 The San Diego Zoo first introduced members and guests to this species in 1928, and sun bears, both Malayan and Bornean, have been leaving their mark on Zoo history ever since. That first bear quickly crumbled and bent a climbing tree made of concrete with internal metal reinforcement—starting the Zoo on what was to be a long learning curve on the destructive capacity and strength of sun bears! The Zoo’s Sun Bear Forest Habitat opened in 1989 and was initially home to five young sun bears that kept themselves busy by rolling sod into the pool, taking down trees, and finding footholds in the perimeter walls of the habitat. An innovative feature of the habitat was an artificial tree with a remotely operated, built-in honey dispenser. The bears responded to the dispenser’s “off time” with an inquisitive and intelligent decision to find the source of the honey. Their strength overpowered the artificial tree, and they destroyed it, along with the honey dispenser. Sun bears are literally built for this type of task. A sun bear’s inward-directed paws, bowed limbs, and strong muscles support arboreal activities with ease. With their strong jaws and claws, they rip and shred trees to expose food items such as termites and stingless bees. 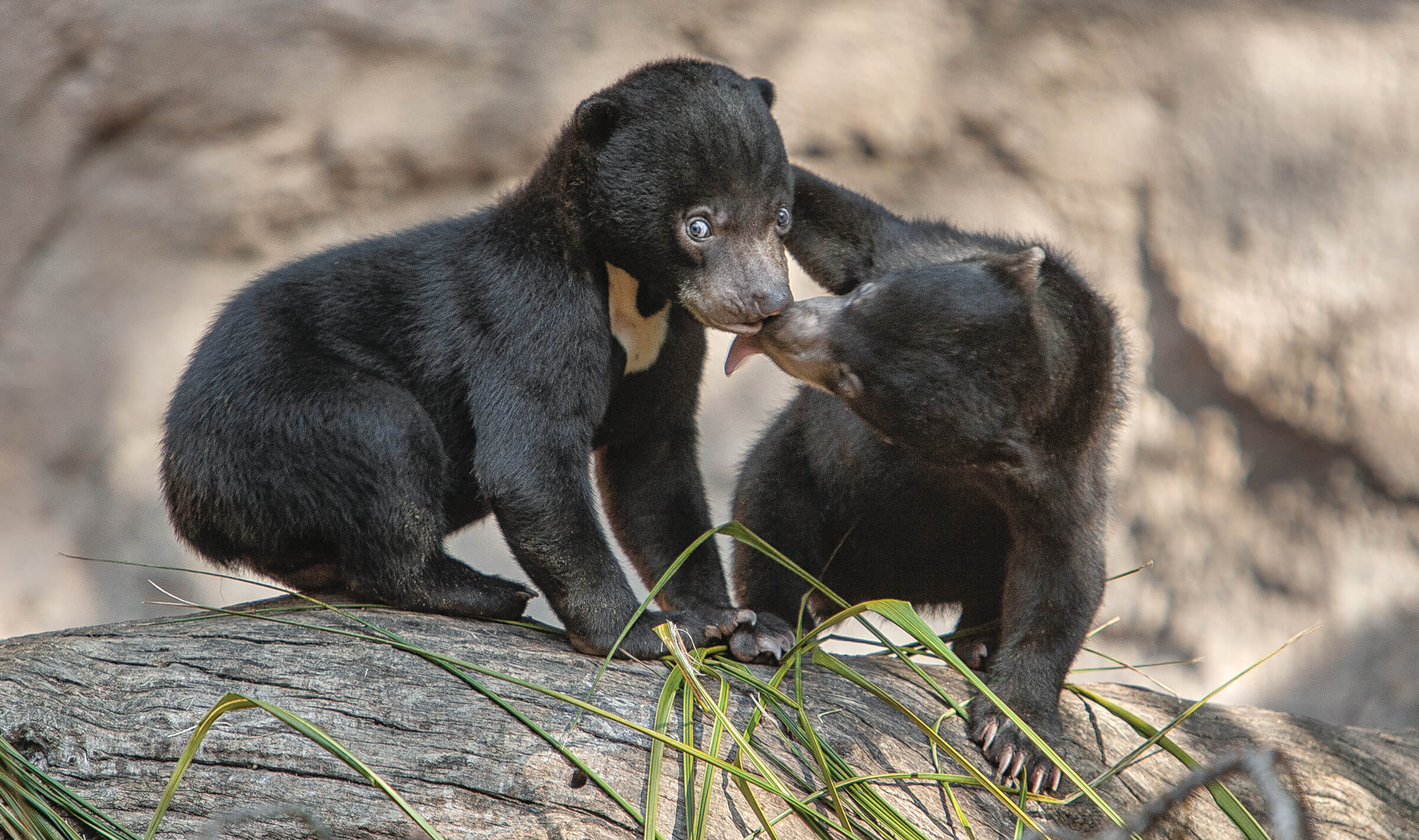 The sun bear’s common name comes from the white or yellowish marking on its chest, which many people think looks like the rising or setting sun.

Keeping Our Promise Over the Years

The mission of the Association of Zoos and Aquariums (AZA) Species Survival Plan (SSP) for sun bears is to cooperatively manage species and populations within managed-care facilities. Through the years, we’ve welcomed several cubs, as have other zoos.

In the late 1990s, as this generation of “bear baby boomers” grew older and became post reproductive, the declining zoo population initiated a collaboration between the AZA Sun Bear SSP, the AZA Bear Taxon Advisory Group, Sabah Wildlife Department of Malaysia, and Sepilok Orangutan Rehabilitation Center. In Borneo, 20 Bornean sun bears rescued from the pet trade needed homes. Eight AZA institutions stepped up to care for the bears, with the goal of supporting a genetically healthy managed population. The first addition to the AZA Bornean sun bear population came in 2004, with the birth of a male cub at the San Diego Zoo to parents Marcella and Dibu. They successfully produced a female cub in 2006 and twin male/female cubs in 2008. Marcella demonstrated solid maternal skills, and all of her cubs thrived! I think it was a relief for Marcella to raise the last two cubs together, as the siblings often directed their energetic bear antics toward each other instead of toward their mother. Today, Marcella is one of fewer than 20 sun bears living in accredited zoos of North America. Her tenacious and persistent curiosity has not waned much over the last 26 years.

We build environmental cues into Marcella’s habitat that provide her information leading to a variety of natural behaviors, as well as unique opportunities and choices. In a recent varied experience implementation by our wildlife care specialists, her habitat was transitioned into a mangrove-like environment over a three-day period. A fog machine began the transition, along with misters, mud-soaked dirt, and saturated browse debris. Grasses and moss were added on day two, along with tubs of salt water and scattered sea shells. The experience culminated in an opportunity for Marcella to obtain fish and squid as part of her diet. She investigated every aspect of the experience and afterward, cautiously sampled the fish. 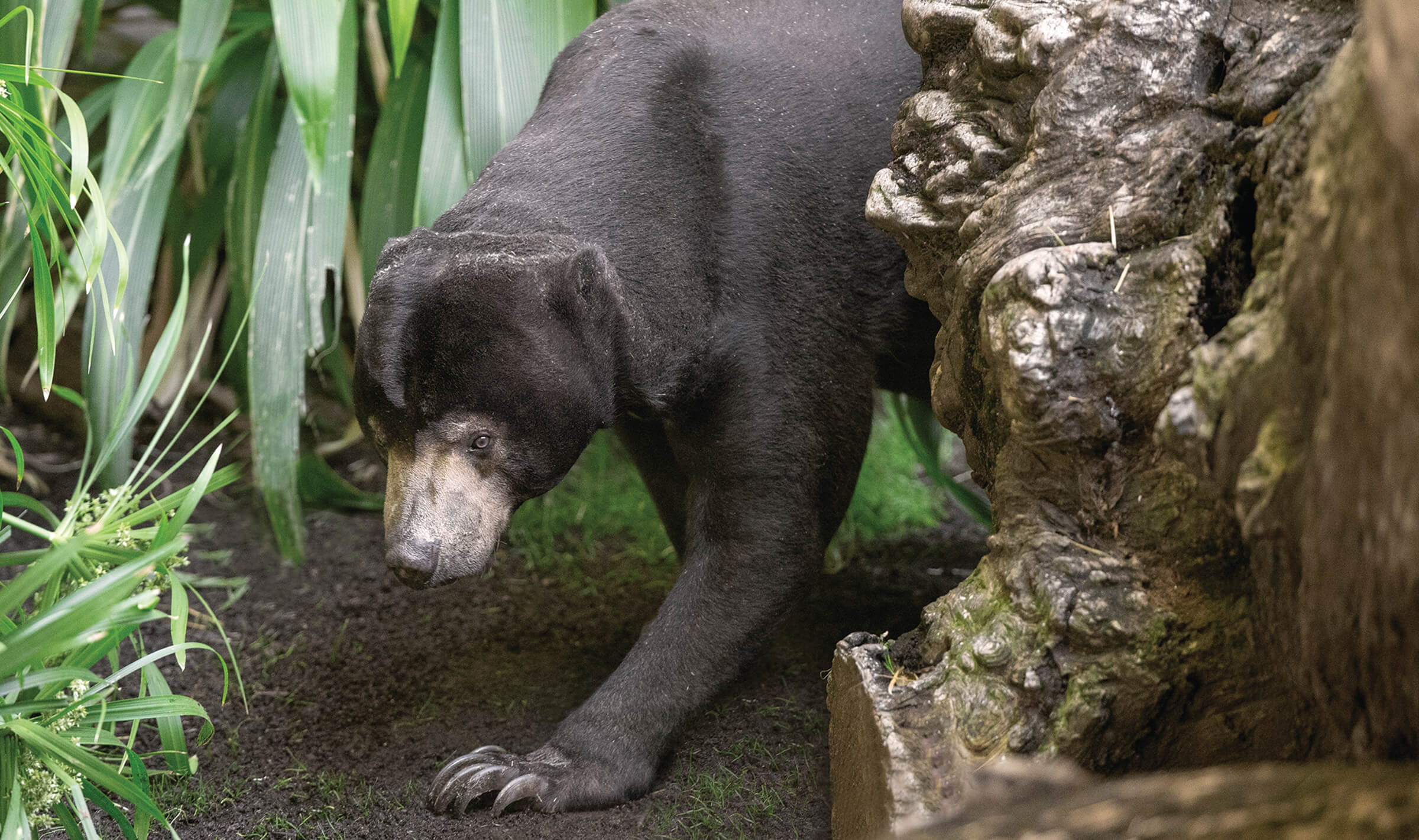 Because of our commitment to the wildlife in our care, I helped transport several sun bears born here to their new homes over the years. These destinations were carefully chosen through the bears’ SSP. One trip was to Seattle with a young adult bear, Palu. The specialized training by wildlife care specialists facilitated a smooth loading into the secure carrier, and a content bear for the long drive. I remember peeking into the carrier about halfway through the journey to find Palu on his back with all four feet up in the air, twirling one of his food puzzles. Perpetually inquisitive, Palu later accomplished the demolition of a solid metal drinker at his new destination. The drinker had withstood years of serving carnivores much larger than Palu—but clearly not as determined. 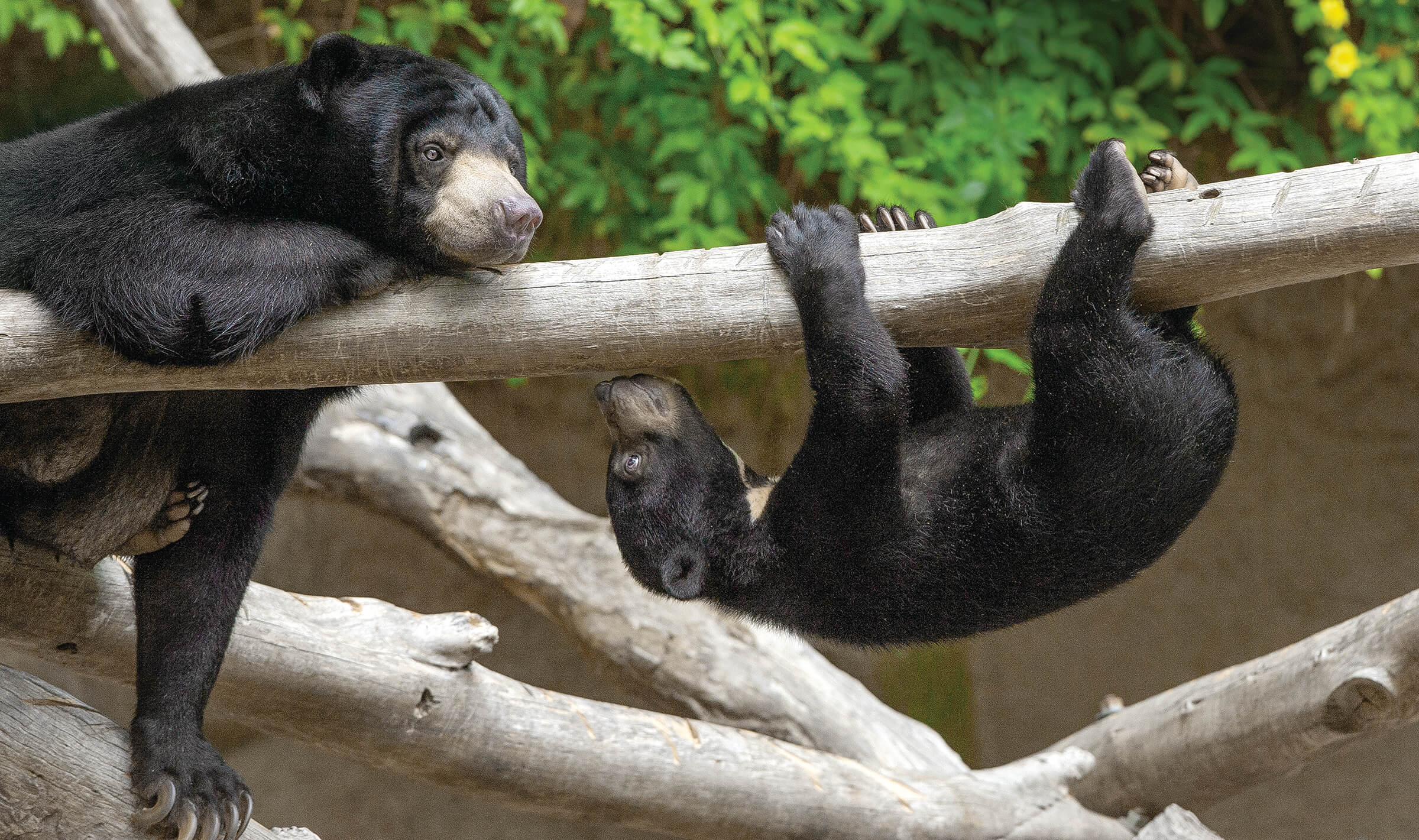 Small populations of sun bears, black bears, and sloth bears have been found in eastern India.

Along with adding to the population, Bornean sun bears at the San Diego Zoo have contributed to conservation efforts. One collaborative project, conducted through AZA, involved analyzing fecal hormones and collecting behavioral data to learn about reproductive cycling. Our conservation researchers described estrous cycles through vaginal cytology, and applied artificial reproductive techniques to evaluate reproductive viability of males. We also studied behavioral components of male-female interactions, maternal care, cub development, and the impact of ambient noise on mothers and cubs.

San Diego Zoo Wildlife Alliance continues to work with global partners, including Free the Bears, on sun bear conservation projects, such as the development of an educational curriculum to increase awareness of sun bear needs and status in Asia. San Diego Zoo Wildlife Alliance is a member of the Roundtable on Sustainable Palm Oil, a collaborative effort directed toward development of sustainable practices for the palm oil industry that will benefit all wildlife in the range. 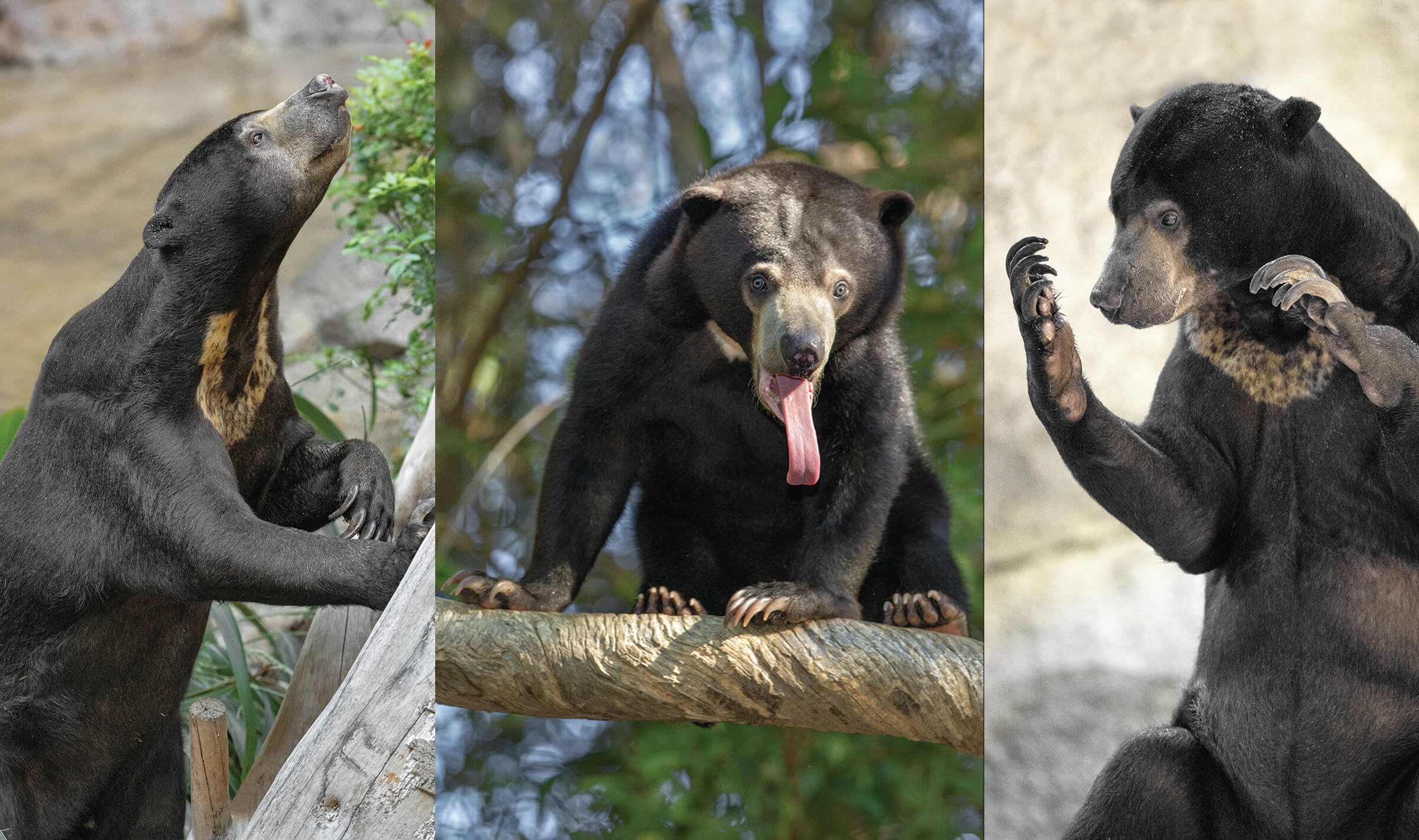 In 2017, a collaboration between Free the Bears, TRAFFIC Southeast Asia, the IUCN Species Survival Commission (SSC) Bear Specialist Group, and the IUCN SSC Conservation Planning Specialist Group brought together 100 researchers, conservationists, government representatives, population managers, and wildlife care specialists, including me. We traveled to Kuala Lumpur, Malaysia, for the International Symposium on Sun Bear Conservation and Management. In part, the vision of Symposium members is for sun bears to thrive as a functional component of their natural ecosystems, coexisting with human societies who appreciate their intrinsic value as living beings.

Here’s hoping that the tenacious attitude of sun bears resonates in a tenacious collaboration to make this vision real.

Gaylene Thomas is a wildlife care supervisor for SDZWA;
Ken Bohn is an SDZWA photographer.