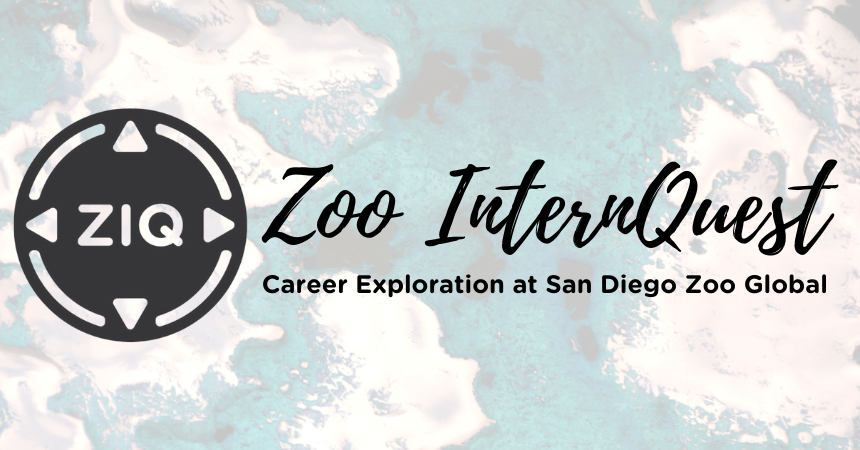 From the moment the interns received the news they were going to visit the Nikita Kahn Rhino Rescue Center (RRC) at the San Diego Zoo Safari Park they have looked forward to this moment with immense excitement! The guest speaker, Weston Popichak, who is a Senior Wildlife Care Specialist for the rhinos, taught the interns about the special training and care the rhinos receive, all to further conservation efforts. Throughout the presentation, the interns had the opportunity to visit the rhinos’ facilities and have close contact with them!

Mr. Popichak has worked as a Senior Wildlife Care Specialist at the RRC for 12 years. He, along with five other Wildlife Care specialists work diligently to take care of ten southern white rhinos. Three out of the five Wildlife Care Specialists attended Moorpark College, including Mr. Popichak. With an on-campus zoo, he had the opportunity to learn about animal care and handling firsthand. The program required him to be responsible for certain animals while attending and studying for his classes. Mr. Popichak touched on the difficulty of this, mentioning he would spend roughly 70 hours a week between classes and animal care. He graduated and received four associate’s degrees in animal care and handling, animal behavior, and animal diversity. During his time at Moorpark, Mr. Popichak interned at three different facilities: the Oakland Zoo, the Monterey Bay Aquarium and the San Diego Zoo Wildlife Alliance (SDZWA). After his time interning at SDZWA, Mr. Popichak applied to and received a job as an elephant care specialist. After four years he shifted to neonatal mammal care, mainly with baby animals like lions, cheetahs and gorillas, making infant formula and bottle-feeding animals that needed to be hand-fed. After staying in this department for three years, an opening appeared at the Rhino Rescue Center. Urged by his peers to apply for the position, he did and has never regretted the decision.

Mr. Popichak’s job involves many tasks and requires creative thinking in order to overcome obstacles. Working as a primary trainer for Wallis, Edward, and Nikita, it is his responsibility to know these rhinos best. Teaching new behaviors and building trust is all part of his job. One of Mr. Popichak’s most important roles is being the voice of these rhinos. He watches the rhinos during training and medical procedures, alerting the other staff if the rhinos are behaving in a way that indicates they are uncomfortable, even ending training sessions if the rhino no longer wants to participate. He jokes that his least favorite part is cleaning the habitat. Even though cleaning the rhino environment is not the most enjoyable, Mr. Popichak enjoys putting his creativity to use just like in their new project, The Big Year Calendar. In this project, Wildlife Care Specialists will do their best to imitate the environment and climate of the rhinos’ natural habitat. For example, in summer in South Africa it is wet and rain is common. The team along with Mr. Popichak decided to run sprinklers in the habitat to imitate this weather. Another enrichment process is copying the scents and behaviors of predators. Mr. Popichak will place feces of lion and hyena to keep the rhinos alert of their surroundings. Playing sounds like hyena barks and lion roars exercises the rhinos defense and hearing. This replication of their natural habitat helps reinforce their natural behaviors. All the effort Mr. Popichak and the team put in is vital to the survival of the rhinos and he has mentioned he has fun while doing it.

Working at the RRC provides a multitude of amazing experiences and opportunities for Mr. Popichak. With the interns, he recalled one of his best-loved memories working with one of his favorite rhinos, Wallis. When Wallis first arrived at the Safari Park in 2015 from a high-poaching area in South Africa, caretakers detected drainage coming from a tiny hole near her heart. She underwent two operations over the following six months in an attempt to clean up and repair the lesion, but the pin-sized hole would not entirely shut. Wallis’ care specialists questioned the cause of the hole until they trained her to stay still for an X-ray using a machine provided to them by the San Diego Fire Rescue Bomb Squad. The squad detected metal fragments in her chest, and with Mr. Popichak at her side, an attending veterinarian was able to use pliers to carefully remove what turned out to be a bullet. Since then, Wallis has been incredibly happy and healthy. It was through this experience that Mr. Popichak got to develop trust in what he describes as the “trust bank account.” This analogy compares the relationship with an animal to a bank account, in that one must invest in their relationship with an animal but also must know when to make withdrawals, essentially meaning a trainer must balance training sessions with an animal’s threshold. With Wallis, he understood that the surgery and the proceeding wound cleaning sessions may have been a lot for her due to her just arriving in a new environment. However, it was through the trust that he built with Wallis in her recovering period that allowed them to make such a strong connection.

Out of the five unique species of rhinos, Mr. Popichak has the opportunity to work with the southern white rhino. The two subspecies of white rhinos are found primarily in Africa in huge savannahs. Northern white rhinos are critically endangered and nearly extinct as there are only two northern white rhinos left on the planet. Southern white rhinos, however, are listed as threatened with a population of about 16,000-20,000. The biggest threat to rhinos is the poaching crisis happening throughout Africa and Asia. Several of the rhinos at the Safari Park were brought in from the wild from high-poaching-areas in hopes of them being used for reproduction. While rhinos have poor eyesight, they rely a lot on their sense of smell and hearing to avoid predators and find their food. The rhinos at the San Diego Zoo Safari Park are fed a diet of bermuda hay and timothy hay along with treats such as orchard hay, celery, carrots, apples and bananas. Mr. Popichak stated that rhinos can get “hangry” just like people so they make sure the rhinos always have food available. During the afternoon, the interns were also able to meet Arthur, a rhino calf born in a field habitat at the Safari Park in August 2020. He had a mother who didn’t show much interest in him and he had some health concerns which led to him staying at the Animal Care Center for 17 days. After this stay in the care center, Arthur was reintroduced into the RRC. He was lucky enough to get not one but four adoptive mothers, which Mr. Popichak referred to as Arthur’s “secret service.”

A long-term goal of Mr. Popichak is to make a lasting impact towards a conservation project. The Rhino Rescue Center gave him that special opportunity. When the RRC was founded, Mr. Popichak was the first to get involved, even being the first face that many of the rhinos saw when moved to San Diego in 2015. The six adult females at the RRC came from their native habitat of South Africa from areas of high poaching rates. They chose wild born rhinos specifically to ensure reproductive vitality. One of the goals of the RRC is reversing the effect of poaching and helping southern white rhinos reproduce more often than they are poached. Another goal is to develop advanced in vitro fertilization and artificial insemination methods to aid in the rebuilding of the northern white rhino population. Deemed functionally extinct due to the fact that the two surviving rhinos are female, the RRC is hoping their work with southern white rhinos will help. They believe that in the future, southern white rhinos would be able to act as surrogate mothers to northern white rhino embryos. The steps they are taking towards this are slow but fruitful. They conduct routine ultrasounds, blood testing and fecal sample collecting to study their southern white rhinos’ hormone levels which is essential to the world’s rhino conservation efforts. The San Diego Zoo and the RRC work with other zoos around the globe as part of the Species Survival Plan. The Species Survival Plan is a program dedicated to population growth of all threatened species in which zoos share information and wildlife with one another to generate genetic diversity and promote healthy reproduction. Programs like these would not be possible without the money donated to the RRC. Mr. Popichak says that donations and education make the longest-lasting impacts in the conservation community. If you want to learn more about the San Diego Zoo Wildlife Alliance’s journey with restoring the white rhino population, you can visit this website: https://science.sandiegozoo.org/species/white-rhino.

Being a Wildlife Care Specialist is a very special and unique career choice. If one is interested in this kind of animal care, Mr. Popichak has some recommendations. To obtain more expertise understanding animal behavior and diversity, he suggests attending Moorpark Community College in Southern California. He promotes Moorpark by pointing out that the school has a zoo on-site where you may learn how to work with a variety of animals. The program there also allows students to “shadow” care specialists at different zoos to get a feel for what actually working in specific careers would look like. It was through this college that Mr. Popichak obtained some of the many skills he utilizes today. It was not solely through college where Mr. Popichak secured his future career, but through his love for what he does. This is also why he stressed the importance of teamwork and collaboration with like-minded individuals in wildlife caretaking. This connection allows trust to form between coworkers and between wildlife and their caretakers. Lastly, Mr. Popichak stated that if one would like to work with wildlife in the future, expect to get dirty!

This week’s session definitely left the interns with an unforgettable experience. There are not many southern white rhinos left in the world, yet the interns had the opportunity to have a close look at them and visit the place where conservation methods are helping increase their population. The interns were also touched by Mr. Popichak’s presentation as they could tell the true care and love he has for every single rhino, as well as vice versa. (He jokingly described the rhinos as his own children and the newest born rhinos as his grandchildren.) They are certainly fortunate animals to be under Mr. Popichak’s care, and their contributions towards conservation will leave a lasting legacy.