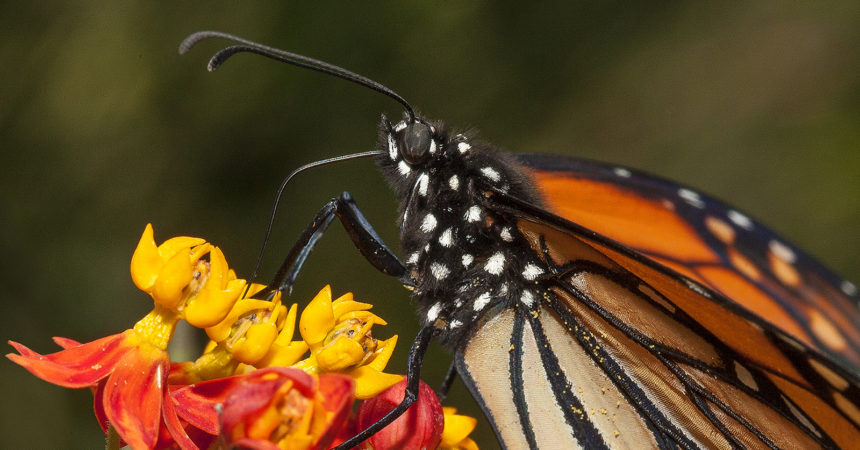 Teams of biologists and community scientists supported by the Xerces Society for Invertebrate Conservation and San Diego Zoo Global are again sounding the alarm for the bright orange butterflies that are iconic images of Coastal California.  Already at dangerously low levels of fewer than 30,000 butterflies for the past two years, preliminary results from the 2020 Western Monarch Thanksgiving Count are indicating a total of less than 2,000 migratory monarchs present in all of the overwintering sites in the state of California, their primary winter refuge.  This represents a population drop of more than 99 percent.

“While we were not expecting to see a rebound in the population this year, we are saddened to witness another massive drop in numbers,” said Emma Pelton, senior conservation biologist and western monarch lead at the Xerces Society for Invertebrate Conservation.

“We are very focused on the immediate needs and concerns of our community and employees, however the wildlife of the world still need us and we remain steadfast in our global conservation efforts,” said Paul Baribault, president and CEO of San Diego Zoo Global.  “This new information about the monarch butterfly population in California is staggering, and we want to lend our support to the cause immediately.”

Monarch populations in California are threatened by a number of factors but conservationists want people to know that there are things that the community can do to save this important butterfly population.

“The incredible migration of Western Monarchs is a unique yet fragile piece of North America’s natural history, and it is on the brink of collapse,” said Paige Howorth, director of invertebrate care and conservation at San Diego Zoo Global.  “We must take targeted, immediate action on behalf of Western Monarchs, and behave as though the future of the western migration depends on it—because it does.”

Though less well-known than the Eastern Monarch population, which overwinters in Central Mexico in the millions, the Western Monarch population overwinters primarily on the California coast and migrates to Oregon, Washington, Nevada and other western states in the spring and summer.  Once numbering more than 4 million butterflies in the 1980s, the number of monarchs observed in the Western Monarch Thanksgiving Count this year has dropped 99% of historical numbers.  These individuals are the source for the migratory population for the following year.  Both North American monarch populations are currently under consideration for listing under the federal Endangered Species Act, with a decision expected on December 15th.

The Xerces Society for Invertebrate Conservation
The Xerces Society for Invertebrate Conservation is a nonprofit organization that protects the natural world by conserving invertebrates and their habitat. Established in 1971, the Society is a trusted source for science-based information and advice and plays a leading role in protecting pollinators and many other invertebrates. Our team draws together experts from the fields of habitat restoration, entomology, plant ecology, education, pesticides, farming and conservation biology with a single passion: Protecting the life that sustains us.

What People Can Do to Help
Plant native:  Native plants, and in particular native milkweed, give monarchs their best chance for success because they are better adapted to their needs. Tropical milkweed (Asclepias curassavica), while beautiful and attractive to monarchs, carries the risks of migratory disruption and disease.
Plant nectar:  Monarchs need more than just milkweed to survive.  Migrating adult monarchs must have access to nectar resources to disperse in the early spring, and they will navigate through urban areas to do so.  Your garden can feed the migration, especially if you live near an overwintering site in the central coast of California!
Plant now:  For native plants, the time is ripe for planting.  Make a habitat plan for monarchs and get those plants or seeds into the ground ahead of winter rains. Both Xerces and Monarch Joint Venture have resources to help.
Record observations:  Biologists still lack key information about the movement of western monarchs in early spring, and the extent of winter breeding on nonnative milkweed in California.  Contribute to the scientific knowledge of monarchs to better inform conservation efforts by adding your observations to the Western Monarch Milkweed Mapper or the Monarch Larva Monitoring Project.