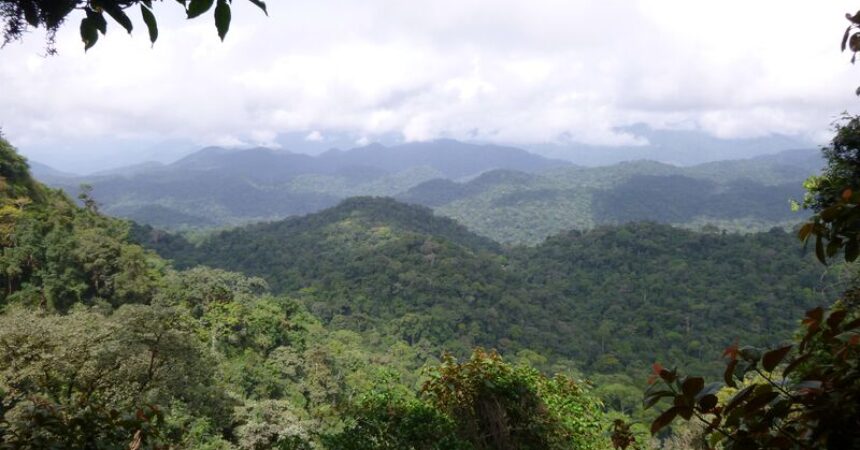 Nearly three weeks after the government of Cameroon approved a forestry management unit that would destroy Ebo Forest in the country’s Littoral Region, on Aug. 11 President Paul Biya withdrew the decree establishing a logging concession and suspended the process for a second concession. Conservationists welcomed the news and are hopeful that the government will embark on an inclusive land-use planning process with local communities to determine the future of Ebo Forest.

Ebo Forest is the ancestral land of more than 40 communities. The local Banen communities depend on Ebo Forest for food and traditional medicines. Any non-consensual development of the forest would heavily affect them. Before Cameroon’s independence in 1960, many communities lived in the forest, and their patriarchs and matriarchs are buried there.

Chief Victor Yetina of Ndikbassogog and a representative of the Association Munen Retour aux Sources, and Ekwoge Abwe, manager of the San Diego Zoo Central Africa Program’s Ebo Forest Research Project, issued a joint statement following the news of the suspension of the logging concession:

“We welcome the suspension, for now, of logging plans in Ebo Forest, but are concerned that its fate remains unclear,” the statement read. “This decision must be the first step toward recognition of Banen’s rights and forest protection. We call on the government of Cameroon to adhere to its international commitments, and to promote participatory mapping and land-use planning with local communities. Land tenure reform must have, at its core, the full recognition of communities’ rights. We also call on international donors and NGOs to support these processes with technical expertise and resources, both in Ebo Forest and across the Congo Basin.”

Ebo Forest is a hotspot for conservation research and discoveries. The forest provides critical habitat for many species of endangered primates, including gorillas, chimpanzees and red colobus monkeys. Researchers believe that the small population of gorillas in Ebo may be a new subspecies, because they are geographically distinct from other populations of western lowland and cross river gorillas. In 2005, researchers discovered that the tool-wielding Nigeria-Cameroon chimpanzees in Ebo Forest are culturally distinct from any other group of chimpanzees in Africa. They are the only chimpanzees to use tools to both fish for termites and crack hard-shelled nuts.

The Cameroonian government had signed an international agreement to protect gorillas and their habitats on July 20, but two days later, it issued a decree establishing a logging concession in Ebo Forest.

“The president’s intervention to halt the imminent destruction of this unique forest is hugely welcome,” said Bethan Morgan, San Diego Zoo Global’s Central Africa Program head, who has been working to conserve the great apes of Ebo since she first observed gorillas there in 2002. “We hope that the international community will seize this opportunity to work with the government of Cameroon to make Ebo a showcase for long-term conservation, in harmony with very challenged communities. These communities have been responsible for the preservation of the treasures of Ebo to date, and an inclusive land-use planning process is now needed to fully share information, in order to make clear and calculated judgements about the future of the forest and its people.”

Ebo Forest makes up half of the Yabassi Key Biodiversity Area, making it a site of global importance to the planet’s overall health and the persistence of biodiversity. It sequesters 35 million tons of carbon. Botanical survey efforts, supported by the Royal Botanic Gardens, Kew, with Herbier National Camerounais, have resulted in the discovery of 29 species new to science, and the area is known to contain 52 globally threatened species on the IUCN Red List of Threatened Species. Ebo is a proposed tropical Important Plant Area.

“We are hugely happy with this positive news for Ebo,” said Martin Cheek, head of the team working on African Important Plant Areas at the Royal Botanic Gardens, Kew. “Not only is Ebo of incredible global importance for its documented plant diversity, but it is the most exciting forest in Cameroon in terms of the high numbers of new scientific discoveries of species still being found.”

Cameroon’s Minister of Forestry signed two orders Feb. 4, proposing the classification of two forestry management units for timber extraction in Ebo Forest. The units would have destroyed the entire gorilla habitat and would have leveled the western part of the forest. The orders were posted publicly March 9, but that did not give the local communities living around Ebo sufficient time and opportunity to provide their input.

“Ebo Forest is such an important site for primate conservation,” said Dirck Byler, great ape conservation director at Global Wildlife Conservation and vice chair of the International Union for Conservation of Nature’s (IUCN) Species Survival Commission’s (SSC) Primate Specialist Group. “With their habitat shrinking across Africa, it’s especially good news that Ebo can continue to provide a home for gorillas and chimpanzees. Hopefully it will be protected from any unsustainable development in the future.”

In April, more than 60 conservationists, including experts from the IUCN SSC Primate Specialist Group and Global Wildlife Conservation, signed a letter to Cameroon’s Prime Minister Joseph Ngute, asking that the plans for the logging concessions be put on hold and the government work with local communities to develop a sustainable land-use plan. They argued that adopting a more inclusive process would signal to Cameroon’s international partners during this critical year for biodiversity that the government intends to honor its commitments to reduce greenhouse gas emissions.