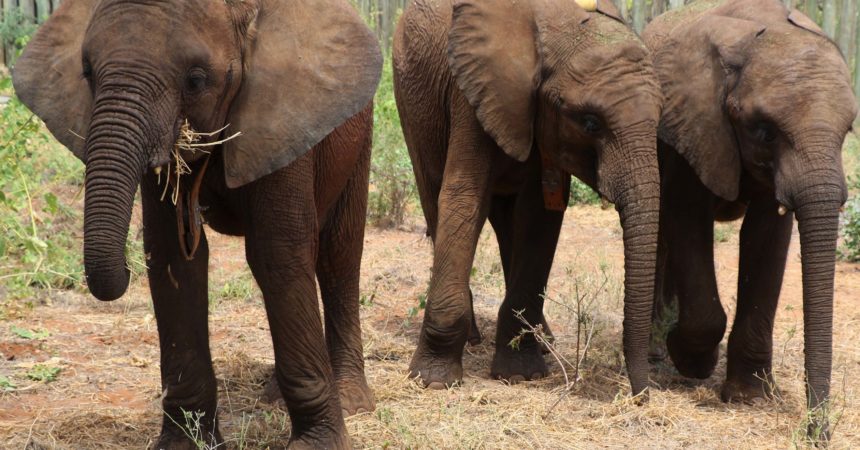 Orphaned elephant calves from the Reteti Elephant Sanctuary are being translocated to their new home in Sera Wildlife Conservancy, in Kenya’s Samburu County this week. In recent months, although Kenya’s conservation efforts have been challenged by the loss of tourism-related funding, dedicated community members continue their efforts to conserve elephants and promote human-elephant coexistence. This week’s reintroduction of four young elephants marks a successful milestone in the ongoing efforts of the Northern Rangelands Trust, Save the Elephants and San Diego Zoo Global for African elephants.

“This brings us to a total of 10 successfully released calves,” says Reteti manager Moses Lenaipa. “As the larger Namunyak Wildlife Conservancy, we are thrilled to share this with the country and the world. We are the only community-owned and managed elephant sanctuary in Kenya, established in 2016—so, at barely three-and-a-half years old, we feel really proud of what it has achieved in the rescue and release of orphaned elephant calves, and the fantastic partnerships it has built and continues to strengthen with all stakeholders in conservation.”

The small group of 3- to 4-year-old pachyderms are being moved into a large, community-managed wildlife conservancy for what experts refer to as a “soft release.”  The calves will be closely monitored through satellite tracking and video surveillance, and supported as necessary while they continue their progress toward a long future roaming the rangelands of northern Kenya. A soft release approach has been adopted to support the survival and social integration of the calves. This approach starts with a short stint in a temporary holding enclosure called a boma—and then, when the calves are ready to roam, they are given access to the entire Sera Wildlife Conservancy habitat. At Sera, the calves have ample opportunity to interact freely with wild elephants.

“From our tracking data, can see that the six Reteti orphans released last year are increasingly integrating with wild elephants,” says David Daballen, head of field operations at Save the Elephants. “The data shows their range overlaps with wild elephants with whom they share water points and are often in close contact. We are pleased with the progress of the orphans, and look forward to watching them grow to mature males and females, and eventually freed from the fenced environment of Sera Rhino Sanctuary to be truly wild.”

The four calves—two males and two females, named Baawa, Nadosoit, Nchurai and Loisaba—were orphaned at a young age and have been successfully rehabilitated at the Reteti Elephant Sanctuary. There, trained and dedicated wildlife care staff from the local community have worked closely with them for the last couple of years. The youngsters have been weaned and are ready for the next stage of their progress toward being adult, wild elephants.

“Nadosoit, Baawa, Nchurai and Loisaba all arrived at Reteti in some sort of critical state, either physically or emotionally,” says Naomi Leshonguro, one of longest-standing keepers at Reteti Elephant Sanctuary, and the first woman to become an elephant caretaker in Kenya. “Together the Reteti team and the Namunyak community raised them up with care and love—up to the point where they are ready to go back in to the wild. And in return, these elephants have raised us up too; not just with love and care, but also by changing our lives forever, with job opportunities and education for our children. I really feel sad to see them leave Reteti, but I feel proud of them and the work we have done to see them return to the wild.”

A team of Kenya Wildlife Service (KWS) and Northern Rangelands Trust (NRT) scientists and veterinarians, Sera and Reteti management and community representatives visited the two facilities and confirmed that the youngsters were ready for translocation from the Reteti rescue facility to Sera Wildlife Conservancy.

A reintroduction program has been ongoing, aimed at developing and sharing best practices for the rehabilitation and social reintegration of orphaned elephant calves. Much of the protocol is focused on monitoring movement patterns, social behavior and body condition. The research effort synergizes expertise, and is co-led by San Diego Zoo Global and Save the Elephants. Working together, and with the wildlife care team at the Reteti Elephant Sanctuary, three of the calves have been fitted with satellite tracking collars that are scaled down in size. The research team is integrating behavioral data collected through video surveillance with satellite tracking data, to generate a detailed look at the orphans’ reintegration into the wild.

“Released elephants have substantial challenges to overcome as they transition to the wild,” says Shifra Goldenberg, ecologist at the Smithsonian Conservation Biology Institute and a research fellow with San Diego Zoo Global. “Long-term monitoring of their behavior allows us to understand the important factors that help them make this transition, which may in turn be used to guide management of future release cohorts.”

The Reteti elephant rescue and rehabilitation center is located within the Ngilai West group ranch of Namunyak Wildlife Conservancy (NWC) in Samburu East, Samburu County. The NWC covers about 800 acres and includes three management units—Nalowuon, Ngilai and Kalepo. The rescue facility was commissioned on July 26, 2016, following a series of appraisals and a memorandum of understanding with Kenya Wildlife Service after a proposal was submitted in January 2014. Its objectives are to provide rescue, return (rejoining rescued calves with families immediately) and rehabilitation of orphaned and abandoned elephant calves in the northern elephant range, and to promote conservation education in the neighboring communities.

At the time of their rescue, the calves were too young to have survived on their own. In addition to proximity of Sera Wildlife Conservancy to the Reteti rescue facility, this conservancy was selected because it has a perimeter fence, no large predators such as lions, an enhanced law enforcement team comprised of Kenya Wildlife Service and community scouts, minimal human activity and a wild elephant population that the calves may integrate with.

ABOUT SAVE THE ELEPHANTS

Based in Kenya, Save the Elephants works to secure a future for elephants. Specializing in elephant research, they provide scientific insights into elephant behavior, intelligence, and long-distance movements and apply them to the challenges of elephant survival. Education and outreach programs share these insights with local communities as the true custodians of this rich heritage. The team works toward a future of harmonious coexistence between humans and elephants. High-tech tracking helps plan landscapes, while low-tech beehive fences, among other tools, provide farmers with protection as well as income. To battle ivory poaching, Save the Elephants teamed up with the Wildlife Conservation Network in creating the Elephant Crisis Fund to identify and support the most effective partners in Africa and in nations with ivory markets, to stop poaching, thwart traffickers and end demand for ivory.