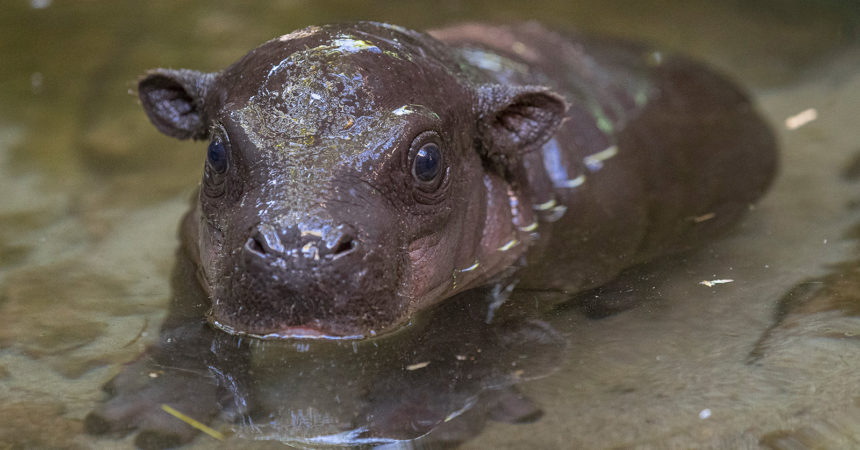 Last month, after days of anticipation, Mabel, a 4-year-old pygmy hippopotamus at the San Diego Zoo, gave birth to her first calf. The male pygmy hippo calf was born just before 9 a.m. on April 9, and weighed 12.4 pounds. This is the first successful pygmy hippo birth at the Zoo in more than 30 years.

Mabel gave birth to the calf in an indoor habitat for pygmy hippos, located in the Lost Forest area of the Zoo. Typically, a pygmy hippo calf is tucked into a safe place before it begins to walk and follow its mother. Wildlife care specialists report that the calf, which has not been named, stood, walked and followed Mabel around within just a few hours of being born. Mom and calf are doing very well, they said—and the calf is nursing and getting lots of attention from the first-time mother.

Pygmy hippos are listed as Endangered on the International Union for Conservation of Nature (IUCN) Red List of Threatened Species, and live in rivers and streams in the forests of West Africa. While their historic range was much larger, pygmy hippos are now found in only four countries: Côte d’Ivoire, Guinea, Liberia and Sierra Leone. Fewer than 2,500 pygmy hippos now remain in Africa, and the primary threats to this species’ population are logging, farming and human settlement in the areas where this species lives.

The pygmy hippo calf is meeting and surpassing the milestones that wildlife care specialists watch for in a young pygmy hippo, including the ability to go underwater. To prepare the calf for exploring in the water, wildlife care specialists placed a small, shallow tub in the indoor habitat. When mom and her calf were given access to the outdoor maternity habitat, staff added a fence to prevent the calf from venturing into too-deep water. The calf demonstrated the natural adaptations and instincts of pygmy hippos—to close their nostrils and to hold their breath under water—and today, both Mabel and the calf have full access to the pool in the maternity yard.

It will be approximately a month before Mabel and her calf, who now weighs 25 pounds, will have access to the main habitat. When this happens, wildlife care specialists will rotate mom and calf with the 13-year-old male pygmy hippo, Elgon. The calf will not be introduced to his father because pygmy hippos do not live in family groups, and males do not play a role in the rearing of offspring.

Pygmy hippos are one of hundreds of endangered species the staff at San Diego Zoo Global is working to protect from extinction, and in recognition of Endangered Species Day—May 15, 2020—the organization is celebrating its supporters who make this work possible. Every member, donor or volunteer—and anyone who has visited the San Diego Zoo or San Diego Zoo Safari Park—has contributed to San Diego Zoo Global’s work to save species worldwide. To learn more about the conservation work that is made possible by this support, visit EndExtinction.org/CelebratingYou. This page also features links to engaging wildlife cams, activities for kids, free online educational courses and ways to participate in citizen science projects from any home computer or smartphone, to help researchers gather important information on threatened and endangered species.