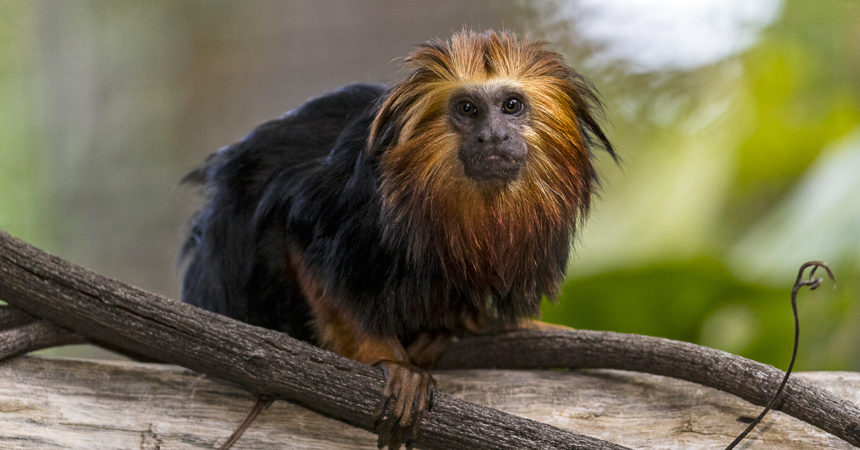 The splashy blooms of springtime remind me how colorful the natural world can be. Being more of an animal person than a plant person, it got me thinking about animals that have color in their name…and their body.  It quickly became clear that from soil to sky, animals add some serious zing wherever they may be! While some animals may not represent the hue in their name—think black and white rhinos, neither of which reflect their monochromatic designation—many species seem willing to grab a painter’s palette and shake the pigment loose…and their name reflects it!

The red panda is a flame-colored, bamboo-loving creature native to the high forests of Asia. Though pint-sized in comparison to the “other panda,” this endangered species more than makes up for it with its stunning good looks and arboreal dexterity—it can climb down trees head first!

Sometimes red doesn’t quite cover the tint, as the scarlet ibis can attest. This gregarious bird lives, travels, and roosts in large, flashy flocks. Its long, curved beak is the ideal tool for poking through the mud flats, estuaries, and shorelines for insects, fish, mollusks, and crustaceans. You might see them on some Caribbean islands and northern parts of South America.

This small, furry-looking tarantula living in rain forests of Central and northern South America has a unique defense: it can throw its hairs from its body at a predator. Mostly dark-colored, the pink-toed tarantula probably doesn’t get any of its toes stepped on due to a blush-colored “slipper” on each of its eight feet!

With its bright, distinctive fur and ability to leap 13 feet in a single bound, this marsupial is unmistakable. The yellow-footed rock wallaby lives in mountain habitats around Australia. Its yellow feet (and hands) are well-adapted to the rugged terrain, enabling it to scale cliffs and climb trees in a pinch. Rock on, little wallaby!

One clear highlight in the Primate Order is the aptly named golden headed lion tamarin. Found only in lowland and premontane tropical forest fragments in southern Brazil, this brilliant little monkey weighs as much as a kitten, and is sympatric with other “colorful” primates including the black tufted-ear marmoset and the yellow breasted capuchin. They sure know how to brighten up a forest!

The smallest of the four recognized mamba species, the green mamba enjoys a wide range across coastal regions of southern East Africa. This slender, arboreal reptile can clear six feet in length. Its venom is a dangerous, fast-acting neurotoxin and, as a reminder, the snake’s head has a coffin shape to it.

Some animals go for the understated daub of color, like the Puerto Rican orange spot millipede. With all those beautiful legs and shiny segments, it didn’t need a garish glob of color to make it pop!

Some iguanas really have the blues, like the stunning Grand Cayman blue iguana. Even as the largest native land animal on its tropical island, this five-foot-long reptile suffers from habitat loss and predation by nonnative, introduced animals like cats, dogs, and rats. But conservation efforts are working, and in 2012 they were downlisted from critically endangered to endangered.

Despite its flamboyant good looks, little is known about the purple-breasted cotinga of South America. But if you saw one perched high in a tree, it would surely stop you in your tracks.

All that glitters is dung! At least for the sparkling rainbow scarab beetle. This North American dung beetle is a sight to behold, as females sport colorful, metallic wing coverings, a twinkling red pronotum (neck area plate), and golden highlights on her head. Males are plain dark blue or black, but have a curved, rhino-like horn on the head. He’s fine with letting the girls shine!

While barely an inch and half across, its wings are sapphire blue with white spots, which dot the landscape through Central and northern South America. To better blend in, the undersides of the hindwings are a mottled gray-brown, while its forewings are black with white patches. The cyan bluewing is “dressed” for anything!

Can you find other animals the live up to their colorful names?

Karyl Carmignani is a staff writer for San Diego Zoo Global. Read her previous blog, In the Field: Ringtails. 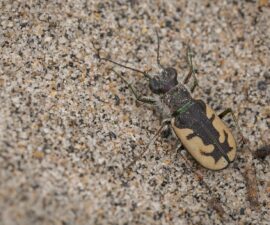 Those who frequent beaches know that with the gorgeous view …
August 28, 2020 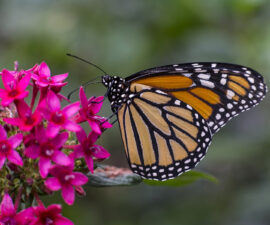 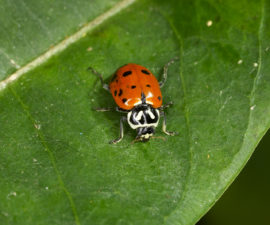 As a little kid growing up in Seattle, springtime always …
May 6, 2020