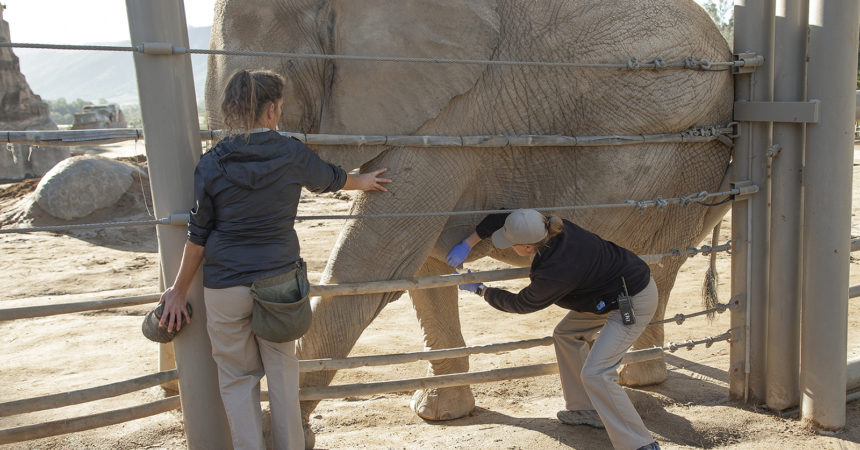 Two lactating African elephants—Umngani (pronounced OOM-gah-nee), who gave birth to a healthy female calf, Mkhaya or “Kaia”, on Sept. 26, 2018; and Ndulamitsi, known as Ndula, who gave birth to a healthy male calf, Umzuli-Zuli or “Zuli,” on Aug. 12, 2018—are participating in a nutritional study, allowing researchers to study the content of their milk.

The nursing mothers have been trained to voluntarily participate in milk expression sessions two to three times a week. “Umngani and our other mother elephant, Ndula, have been trained through positive reinforcement to allow us to collect milk from them,” stated Mindy Albright, senior keeper, San Diego Zoo Safari Park. “Not a lot is known about African elephant milk, and we have this wonderful opportunity to collect milk from not one, but two nursing mothers at the same time.”

Nutritionists and researchers at San Diego Zoo Global, collaborating with researchers at University of California San Diego, and Smithsonian’s National Zoo Milk Repository, are utilizing innovative technology to evaluate the content of fat, proteins, amino acids and other nutrients in the collected milk samples. The information gleaned from this study will be used to develop an improved “recipe” for milk substitutes used with hand-reared calves in zoos, as well as at the Reteti Elephant Sanctuary in northern Kenya.

“Dam’s (mother’s) milk is considered the best source of elephant calf nutrition, but unfortunately, in some cases, we need to assist-rear animals,” said Katie Kerr, Ph.D., nutritionist, San Diego Zoo Global. “The data on the composition of African elephant milk are limited. Understanding nutritional composition of this milk is integral to increasing survival of young calves in these situations, and the opportunity for older calves to thrive.”

San Diego Zoo Global collaborates with the Reteti Elephant Sanctuary, which operates a community-based elephant orphanage that cares for injured, abandoned and orphaned elephants in the Namunyuk region of Kenya. The sanctuary was established by the Northern Rangelands Trust, together with other partners, and works with the Kenya Wildlife Service to manage the animals in its care.

The elephant calves generally arrive at Reteti Elephant Sanctuary stressed and compromised, so it is vital that they get as much nutrition as possible from their bottle feedings. The recent births of the two elephants at the Safari Park provide an opportunity for animal care experts in San Diego and in Africa to not only share information about nutrition and maternal care, but also daily walking distance, growth and development, and bioacoustic communication, to help improve animal care and conservation efforts in both countries.

The Safari Park is home to 14 elephants—four adults and 10 youngsters. The adults were rescued in 2003 from the Kingdom of eSwatini (formerly Swaziland), where they had faced being culled. A lack of space and long periods of drought had created unsuitable habitat for a large elephant population in the small southern African country. Since 2004, San Diego Zoo Global has contributed $30,000 yearly to the Kingdom of eSwatini’s Big Game Parks to fund programs like anti-poaching patrols, improve infrastructure and purchase additional acreage.