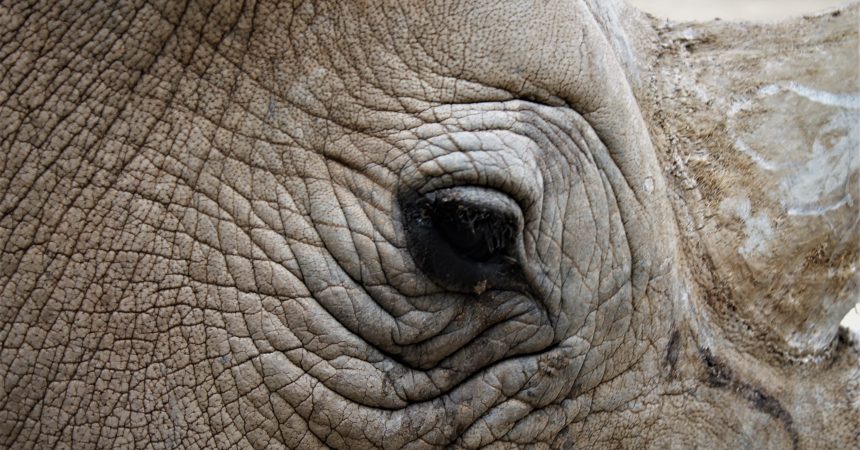 InternQuest is a seven-week career exploration program for San Diego County high school juniors and seniors. Students have the unique opportunity to meet professionals working for the San Diego Zoo, Safari Park, and Institute for Conservation Research, learn about their jobs, and then blog about their experience online. Follow their adventure here on the Zoo’s website!

On Wednesday and Thursday of this past week, we spent time with key members of the San Diego Zoo’s effort to conserve the northern and southern white rhinoceros. Both species are critically endangered, but the northern rhino’s situation is more extreme: three remain in the wild, and all are related. The Zoo is researching the possibility of using assistive reproduction to help increase the population. This is the Nikita Khan Rhino Rescue Center (RRC), which is located within the Safari Park. Seven southern white rhinos that are a part of the assistive reproduction project are housed here. The rhinos are well cared for, and the Escondido climate nicely mirrors the weather that the rhinos are naturally adapted to in the wild. On Wednesday we heard from Senior Scientist Dr. Chris Tubbs and research coordinator Ms. Rachel Felton. They work at the Institute for Conservation Research (ICR) in conjunction with keepers at the RRC to research rhinoceros reproduction. Dr. Tubbs and Ms. Felton monitor the levels of chemical signals present in the rhinos. They pay particular attention to progesterone, a type of cholesterol produced when females ovulate, as it indicates if a female is or could become pregnant. The choice method to measure progesterone levels is through fecal samples (pictured above), as this type of sampling is noninvasive. Dr. Tubbs, Ms. Felton and fellow scientists do not just monitor rhinos, they examine fecal samples from many of the animals at the Zoo. Pictured here, beginning in the top left corner and moving clockwise are samples of panda, giraffe, koala, rhino and elephant dung. Fecal samples are easier to collect from animals than blood or urine samples, and they also do not involve an invasive procedure, like using a needle to draw blood. An important part of the San Diego Zoo’s conservation programs is the Frozen Zoo. The Frozen Zoo contains cells from thousands of species that have all been carefully preserved. The cells can be reverse engineered to their original stem cell state. From there the cells can be used in any number of ways. There are samples from 12 individual northern rhinos in the Frozen Zoo, which could be used in assisted reproduction to yield more genetic diversity than is present in wild white rhinos. As a part of Dr. Tubbs and Ms. Felton’s presentation, they created a mock situation to model the type of work that they do in the lab. We were given several “samples” collected from rhinos, and we had to measure the level of progesterone in the sample, then graph the data, and then interpret the meaning of the trends observed. The scientists at the ICR use the data like a pregnancy test; a spike in progesterone indicates that an animal could get pregnant, and a prolonged increase in progesterone usually means that an animal is in fact pregnant. We spent Wednesday afternoon with Weston Popichak, one of the keepers working with the southern white rhinos at the RRC. The first rhino that we met was Livia, this is her eyeball. Rhino’s have poor eyesight and rely more on their senses of hearing and smelling. The keepers make sure to stimulate the rhinos, and provide them with enrichment, which can vary from making trails of spices to playing with street sweeper brushes. This is Wallis, the smallest of the six females at the RRC. The scar on her side is the reason why the research that the Zoo is conducting is so important. The scar is from what is believed to be a poaching attempt. When Wallis arrived in 2015, Mr. Popichak noticed a weeping injury on her side. After a few months the wound was still not healing, Wallis underwent two surgeries but the wound still didn’t heal. Vets were considering a third surgery, when one day, like a splinter, a bullet was dislodged. The wound then promptly healed, but the scar still remains as a reminder of the poaching that is decimating rhino populations. As a part of the reproductive research, ultrasounds are regularly taken of the rhino’s uteruses to check on egg growth. This helps the keeper to learn about each animal’s individual’s cycles. Since the rhinos have arrived, approximately 400 ultrasounds have been taken. Amani is the largest rhino at the RRC. At 4,400 pounds, she is even larger than the resident male, Maoto. The research occurring at the ICR and the RRC is critical to the survival of all species of rhino. Even though rhinos are among some of the most well-known endangered species, there is still information to be learned about them. The work of Dr. Tubbs, Ms. Felton and Mr. Popichak is actively helping to save these gentle giants.