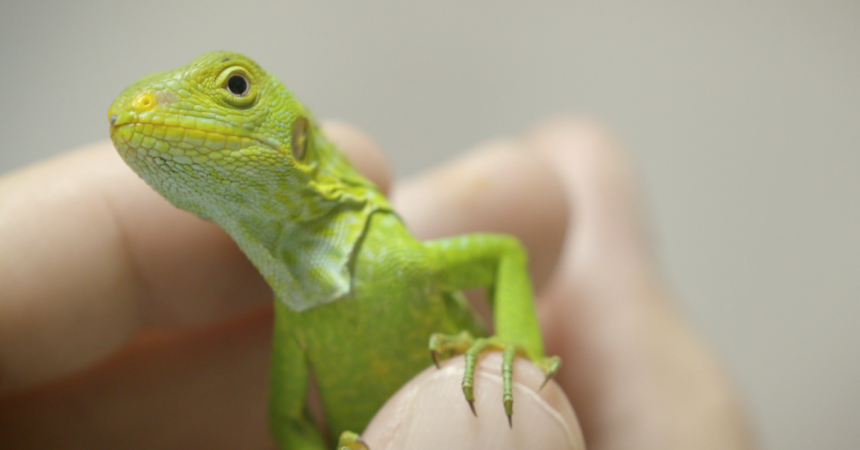 Conservationists working on behalf of Ahura Resorts and San Diego Zoo Global were excited to find a baby Fijian Crested Iguana during a recent population survey of a remnant dry forest area on the island of Malolo Levu. The baby brings the total documented number of this population to 31 individuals.

‘We found a new baby the other night and have named him Savuti” said Kim Lovich, curator of reptiles. “To protect him from being predated by cats we have moved him into a captive environment until he is bigger when we plan to put him back into the forest.”

The Fijian Crested Iguana was considered extinct on Malolo Island until 2010 when an injured adult female was discovered at Likuliku Lagoon Resort. Since that time conservationists have undertaken a number of surveys and have been able to document 30 individuals of the species that continue to survive in the few acres of dry forest available to them.

“We are avid that the little bit of dry forest that we have on our lease is maintained and preserved “said Steve Anstey, Group General Manager, Ahura Resorts. “Dry forests are one of the most endangered eco systems on the planet and it is crucial that all efforts are made to protect the small areas that remain and help revegitate it.”

Working closely with researchers from the US Geological Survey, Taronga Zoo and San Diego Zoo Global, Ahura Resorts officials have identified the major threats affecting the iguana population – working to control the feral cat and rat populations while maintaining an ark of the species in a protected breeding facility at the resorts. Ahura Resorts is currently working to also develop an ongoing tropical dry forest reforestation program on the resort leases so that existing native habitat can be expanded.