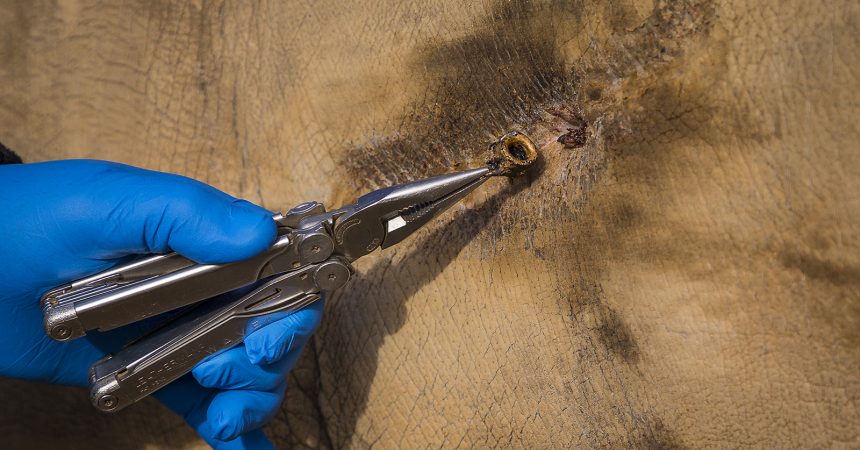 On Saturday (Dec. 17, 2016), animal care staff was able to confirm the cause of a wound in a southern white rhino named Wallis, living at the Nikita Kahn Rhino Rescue Center at the San Diego Zoo Safari Park. It was suspected this rhino, which had previously lived on a reserve in South Africa, had an infected bullet wound, based on tests that showed metal under her skin.

While keepers were cleaning the wound of the 5-and-a-half-year-old rhino for an exam that day, they noticed a tiny, hard, black object. On further examination, Safari Park veterinarian, Jim Oosterhuis, suspected the object could be the bullet they had believed was inside the animal. “I reached into the wound with my Leatherman tool, grasped the object, made a quick jerking motion, and out popped the bullet fragment with jagged edges,” said Oosterhuis. “It feels great to know that we finally have found what we believe to be the source of her infection. By having the fragment work itself out, it eliminated the need for surgery.”

Wallis arrived at the Safari Park in November 2015 with a skin wound, and veterinarians began treating it immediately. When the wound didn’t heal, a minor surgical procedure was performed in April 2016 to explore and clean the area. When this did not resolve the issue, a second procedure was performed in July, revealing that the wound was more extensive than it first appeared. There was speculation that the wound was originally caused by a penetrating foreign object. A metal detector provided a strong signal indicating a brass or lead object—possibly a bullet or bullet fragment—was under the wound site. While the wound did not appear to have an adverse affect on Wallis’ overall health, it was important to identify the source of the infection. It was determined the next step would be anesthetizing the animal and pinpointing the specific location of the metal, with the goal of removing the object.

“It’s a great feeling for me—and all the veterinarians and keepers at the San Diego Zoo Safari Park—to care for and help this rhino recover,” said Oosterhuis. “The bullet fragment appeared to be lodged under her rib—and every time she moved, the rough, jagged edges were irritating the tissue. Since removing the fragment, the wound is healing rapidly, and I expect it to be completely healed in a week.” Oosterhuis added, “I want to give credit to our talented keeper team at the Nikita Kahn Rhino Rescue Center. They have been cleaning and flushing the wound on a regular basis. They have been working with Wallis and the other rhinos to build relationships and train them, through positive reinforcement, to receive any needed medical procedures, as they could potentially serve as future surrogate mothers for a northern white rhino. This training was instrumental in allowing our veterinary team to be able to interact with and treat Wallis on a daily basis.”

Strong speculation is that Wallis was the target of a failed poaching attempt while in South Africa, where shooting and killing rhinos for their horns has dramatically affected rhino populations in their native habitats and in private reserves. Rhinos are poached for their horn, which is made of keratin—the same material that forms human fingernails. Rhino horn has been erroneously thought to have medicinal value and is used in traditional remedies in some Asian cultures. In addition, objects made of rhino horn have more recently become a “status symbol,” purchased to display someone’s success and wealth, because the rhino is now so rare and endangered.

Wallis is one of six female rhinos that were relocated to the Safari Park from private reserves in South Africa in early November 2015, as part of a collaborative conservation effort to save the critically endangered northern white rhino—and all rhino species—from extinction. 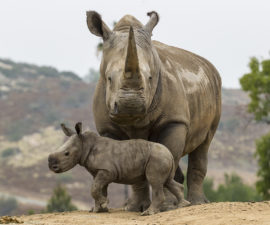 From burrowing owls in Southern California to giraffes in Kenya; …
May 14, 2019 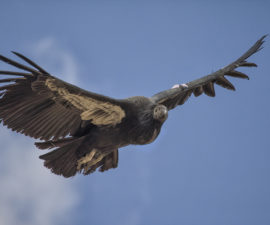