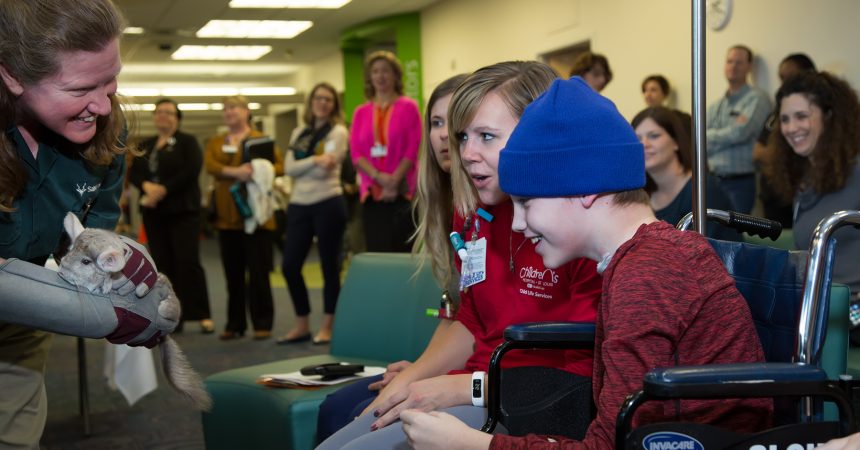 Young patients, their families and invited guests were treated to a special visit by animals including a porcupine, a chinchilla, Flemish rabbits and an eagle from the Saint Louis Zoo, this morning (Nov. 15, 2016) at St. Louis Children’s Hospital. The event announced that an innovative closed-circuit television broadcast channel—San Diego Zoo Kids—is coming to St. Louis through the combined efforts of San Diego Zoo Global, the Saint Louis Zoo and St. Louis Children’s Hospital.

Funded through a generous gift by businessman and philanthropist T. Denny Sanford, San Diego Zoo Kids provides family friendly, animal-oriented programming that is both entertaining and educational. The channel is available on TV monitors in every patient room, as well as in waiting areas at St. Louis Children’s Hospital.

“We are thrilled to partner with the San Diego Zoo to further enhance the stays of our young patients,” said Jill Malan, manager of child life services at St. Louis Children’s Hospital. “These entertaining and educational animal stories will be a welcome distraction for our young patients, and we are thankful for the donations and sponsorships making it possible.”

“San Diego Zoo Kids has the ability to bring the zoo to young patients who don’t have the opportunity to visit,” said Douglas G. Myers, president and CEO of San Diego Zoo Global. “The stories we tell through this channel not only entertain children and their families during what can be a stressful time, but hopefully inspire a new generation to appreciate wildlife and their natural habitats.”

The channel will also feature animal stories from the Saint Louis Zoo. “We are so pleased to be a part of this partnership,” said Jeffrey P. Bonner, Ph.D., Dana Brown president and CEO of the Saint Louis Zoo. “Connecting people with animals and nature is what we are all about; we hope this programming can bring smiles to the faces of the children who are dealing with health challenges.”

San Diego Zoo Kids debuted in 2013 at Rady Children’s Hospital in San Diego. Since then, it has been installed in 79 children’s hospitals and Ronald McDonald Houses in 26 states across the United States, and in three countries.

About the Saint Louis Zoo
Chosen as the nation’s #1 Free Attraction by USA Today’s 10Best and named America’s #1 Zoo by Zagat Survey and Parenting Magazine, the Saint Louis Zoo is widely recognized for its innovative approaches to animal management, wildlife conservation, research and education. One of the few free zoos in the nation, the zoo attracts more than 3,000,000 visitors a year. For more information, visit stlzoo.org.