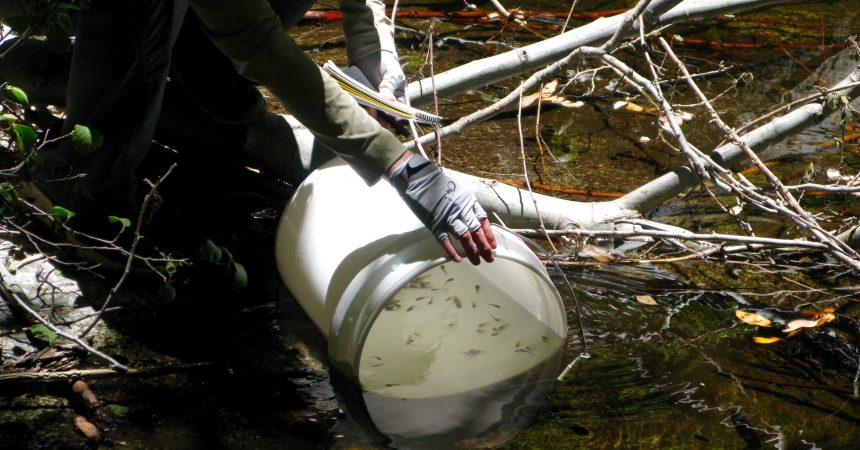 The day began at 6 a.m. for the San Diego Zoo Institute of Conservation Research staff members. We congregated in the lab to count the tadpoles and transfer them from their tanks to transport buckets. We ended up with 6 buckets containing between 175 and 200 tadpoles apiece. Each transport bucket was then placed inside of another bucket that contained a small amount of ice. This set up allowed us to maintain a cool, consistent temperature for the two-and-a-half hour drive from Escondido to the San Jacinto Mountains.

When we arrived at the release site we met up with Allison Alberts, chief conservation and research officer; Ron Swaisgood, director of Applied Animal Ecology; and USGS staff. After a quick review of the plan, we unloaded the buckets, emptied the ice, and started the trek down to the six release pools that USGS had previously scouted out. The tadpole release itself is not overly complicated. At each pond, we record air temperature, wind speed, humidity, water temperature, and pH then gradually acclimatize the tadpoles to the pond’s water chemistry. When it is time to release the tadpoles, we slowly tip the bucket and gently pour them into the their new home. After the initial reintroduction, we return to the release pool every two weeks to check water levels and to see how the tadpoles are faring. Spotting a tadpole can be difficult; if the pond is not in direct sunlight or it contains a lot of ledges and dark hiding places, finding the juveniles can be almost impossible. And if the water is murky, the odds get even worse. Luckily, we have had some good fortune and have been able to spot quite a few tadpoles—all of which appeared healthy and well fed.

This month, 150 more tadpoles were released in East Fork City Creek in the San Bernardino Mountains. This was an exceptionally monumental event because it is the first time we have had a reintroduction for this particular population in the 10 years the mountain yellow-legged frog program has been in operation at the Institute for Conservation Research. Currently, 200 tadpoles from this same population are being held back in our laboratory where they will be head-started until they morph into froglets, which will be released in spring of 2017. Stay tuned for updates!

Michelle Curtis is a research associate at the San Diego Zoo Institute for Conservation Research. Read her previous blog, A Special Eggs-pertise. 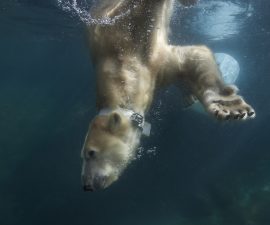 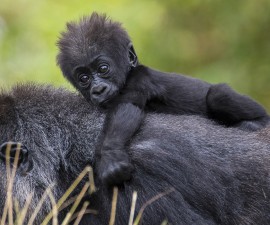