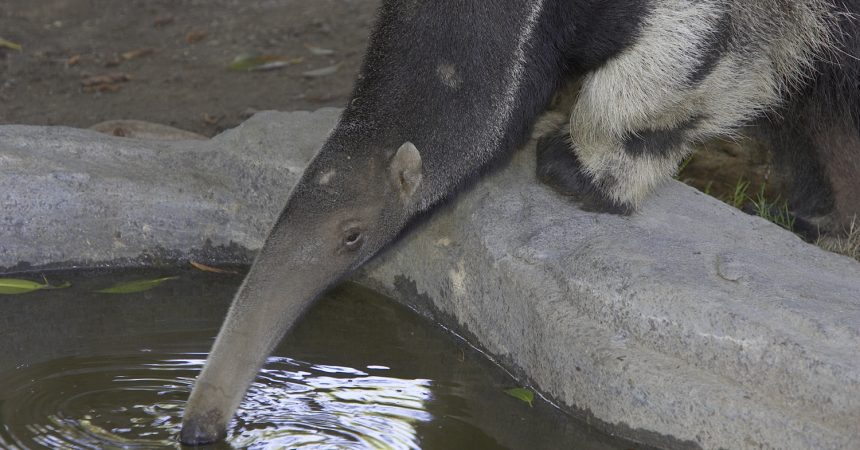 She puts the giant in giant anteater. The fluffy, striped, long-nosed, golden retriever-sized animal has been at the Zoo since 2002, including a brief stint at the Safari Park with her then-mate Kane. But he passed away last December, and Lucy was alone. Now the 16-year old, Paraguay-born, irresistible insectivore is enjoying her golden years with a new giant anteater companion, Orion. Perhaps she’s “seeing stars” again, as she has really perked up since his arrival last March. “After Kane died, Lucy just stayed in her cave most of the day,” said Ashley Roberts, senior keeper. “But now she walks around and Orion follows her, playing with her feet. She stands up and tugs on the ivy—a sight to behold!—and seems to enjoy his attention.”

When Orion arrived from Busch Gardens, he was pretty feisty and not as tractable as Lucy. “He was young, and it was a whole new environment and keepers,” explained Ashley. Giant anteaters have formidable 3- to 4-inch long claws on their front paws, which they use to bust into termite and ant nests, as well as defend themselves, so keepers were cautious introducing them. “We used a ‘howdy fence’ that they could see each other through,” said Ashley, “and the interactions were friendly.” So they removed the fence and the anteaters had access to one another. “At first they ignored each other, then at one point started to rear up like they were going to spar, but then it turned into sniffing one another and now they seem to be smitten with each other.” There is even a pile of grass in one corner of the exhibit that Orion has painstakingly collected from a nearby plant to create a cozy nest!

Though Lucy is likely past her reproductive years and Orion is not yet sexually mature, they still manage to engage in breeding behavior. For giant anteaters, it can be a tricky proposition! First, the female solicits the male and lays on her side then the male kind of spoons her for a few moments…then voilà, about 190 days later a cute little “mini me” arrives ready to ride piggyback on mom for its first year of life.

Giant anteaters are edentate animals, meaning they have no teeth. But they have the longest tongue of any mammal, which is attached at its sternum. The tongue can flick out three times a second to lap up the thousands of ants and termites they consume each day. Ashley explained that the animals’ powerful gastric juices combined with a bit of soil and sand caught with their quarry, and the formic acid found in their insect prey digests their food just fine. Keepers have drilled holes in logs in the exhibit, to add special treats like mealworms and powdered insectivore food, which the animals detect via scent and scarf up with that long, fast tongue. Lucy interacts with her keepers, happily hopping on the scale (she weighs about 140 pounds) for some mealworms. She enjoys belly rubs, too. “Lucy has been trained to ‘station’ for an ultrasound,” said Ashley, “so we can monitor her health more closely without using anesthesia.”

These mighty animals are from South and Central America. Their claws, sharp as power tools, quickly dismantle a termite or ant mound. They only feed for about a minute, until the ants fight back with painful stings. They cannot retract their claws so giant anteaters walk on their knuckles (like gorillas) with their claws folded beneath their palms. Ashley shared that once in a while a mouse will find its way into Lucy’s world and she will “tenderize it” with her fists, then use her tongue to clean it out. Ewww! In the wild, giant anteaters are well-equipped to stave off threats like jaguars, as they can piloerect their fur so they look even larger, rear up on their hind legs, using that strong tail like a tripod, and take swipes at the enemy and do some serious damage. They are typically not aggressive, but they can be fierce! Luckily, Lucy and Orion face no such threats at the Zoo and are free to enjoy each other’s company, and dine over termites. 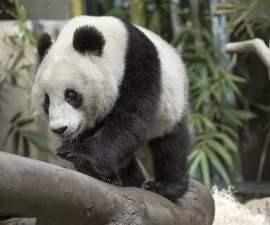