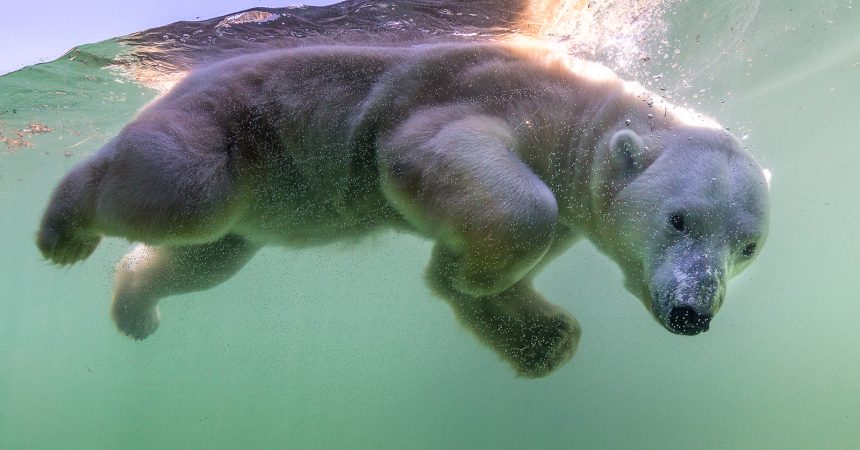 Arctic sea ice is home to innumerable species, large and small. From polar bears and people, to diatoms and algae, a rich and diverse array of organisms has evolved to survive and thrive in this cold and inherently dynamic environment. However, climate change caused by greenhouse gas emissions is having a dramatic and negative impact on Arctic sea ice. In fact, scientists have documented a loss of over 40 percent of the summer sea ice extent since 1979, equating to more than 2 million square miles of lost habitat for polar bears, and other species.

Because polar bears depend on Arctic sea ice for key aspects of their survival, sea ice losses are projected to have devastating impacts on polar bear populations. However, the implications of this unprecedented and rapid loss of Arctic sea ice go far beyond habitat loss for polar bears, as the presence and seasonal dynamics of Arctic sea ice influence global weather patterns—including ocean and air temperatures, storm frequency, and storm intensity. Changes to weather and global ocean and atmospheric circulation patterns associated with rapid sea ice decline will have direct impacts on our lives and our economy. These changes are already being felt by people all over the world. Rewriting the Future
While the news has not been good, it is important we remember that while it may take decades for the sea ice to regain its pre-climate change extent and volume, there is no tipping point for permanent loss of sea ice. Our behavior—what we consume and what fuels we use—can change the trajectory of loss that has been documented in the past decades. We can rewrite the future that these decades of loss predict. The hope that this can (and should) give us is truly a call to action—because we do not have all the time in the world, if we want to protect habitat for polar bears and other Arctic sea ice-dependent species. While scientists indicate that dramatic reductions in human greenhouse gas emissions could lead to sea ice restoration over the course of the next century, the losses that polar bear populations are experiencing are unfolding over a very different time scale: polar bear generations. Thus, in order to save polar bears, we must act now—and we must work together to ensure that polar bears do not become endangered. Learn About Arctic Sea Ice
The inherent remoteness of Arctic sea ice to most human populations means that the beauty and complexity of this biodiverse and unique ecosystem is not well understood by most of us. Luckily, there are numerous ways to learn more about Arctic sea ice, its influence on global climate, the organisms that depend on it, and most importantly, what you can do to make a difference. For more information, read Study Indicates Polar Bears are Swimming More as Sea Ice Retreats—and learn about Arctic Sea Ice Day, and how you can help in your community. Working Together to Save Polar Bears—by Saving Sea Ice
At San Diego Zoo Global, we are working with a range of partners, including Polar Bears International, toward a common goal: making sure polar bears, and polar bear habitat, can be found in the Arctic long into the future. Our research is focused on understanding how polar bears are being impacted by declines in sea ice and human activity. At the San Diego Zoo, our polar bear exhibit provides visitors with interactive opportunities to learn about polar bears, their reliance on sea ice, and the impact of greenhouse gas emissions on Arctic sea ice. And of course, there are no better ambassadors for the Arctic sea ice than our very own Tatqiq, Chinook, and Kalluk!