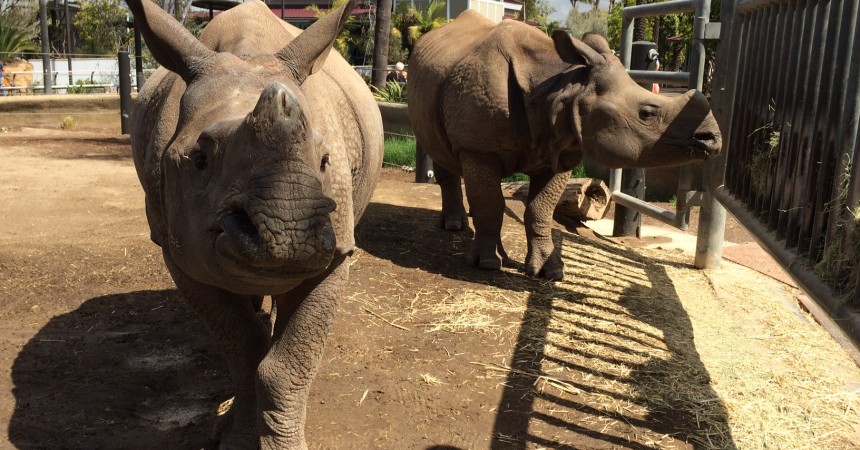 On March 9, 2016 Jiyu, a greater one-horned rhino, arrived at the San Diego Zoo from the Lowry Park Zoo in Tampa, Florida. Just like Jeezan, he spent a few days in the barn acclimating to his new surroundings and getting to know his keepers. Jiyu will be three years old in May and is smaller than Jeezan. His personality is a fun mixture of cautious with a desire to explore. He takes food from the keepers and allows us to rub and touch his sides.

For the first week, we kept the rhinos in separate yards. While they probably smelled each other, they didn’t give any indication that they knew another rhino was around. The first meeting took place side by side in the barn stalls. Jiyu was very nervous, standing still facing Jeezan while giving his rhino baby call. Jeezan came inside, immediately, ran back out then slowly came back in to investigate. They both did well with no aggressive moves being made by either. Over the next week, Jiyu got to explore the pool side of the yard with the middle yard acting as a buffer between the boys. By the end of the week, we introduced them in side-by-side yards. They showed an interest in each other and showed no aggressive attitude.

After allowing Jiyu the opportunity explore the entire yard by himself, the big day arrived. We opened the gates and let Jeezan and Jiyu have access to each other. We were prepared for the worst and hopeful for the best—and the best is what we got! The “boys” often power lunch together.

Jiyu was nervous and ran away a few times, but Jeezan stayed calm and gave him the space he needed to become comfortable. As I write this, they have been together two weeks and they are almost inseparable, eating out of the same feeders and sleeping in close proximity to each other. Jeezan is helping Jiyu come out of his shell, with his calm attitude around the keepers as well as the crowds and buses. Our hope for the future is to get Jiyu trained to join Jeezan in participating in the Backstage Pass program. Stay tuned for the future exploits of Jeezan and Jiyu!

Victoria Girdler is a senior keeper at the San Diego Zoo. Read her previous blog, New Guy in Town. 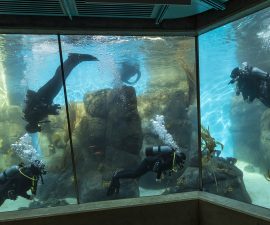 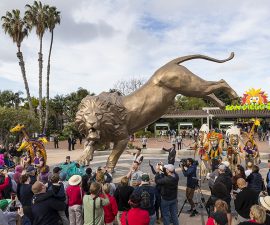