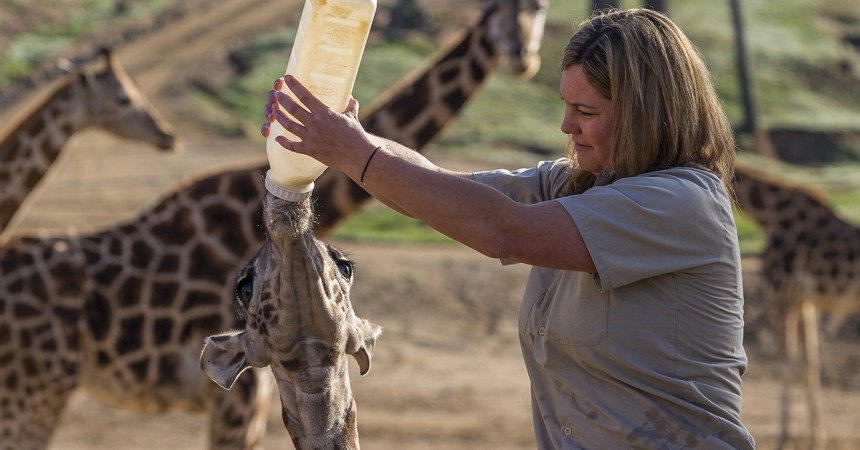 Two months can make a big difference. Baridi (Ba-reed-ee), a giraffe calf born septic a few weeks ago at the San Diego Zoo Safari Park, is now healthy and has a settled in with a new giraffe “family.” The more-than-7-foot baby has joined the four other young giraffes—Congo, Siri, Yamikani and Kafele—in the East Africa exhibit, where they are often seen together in a crèche, or nursery group.

Baridi, whose name means cold in Swahili, was born on a chilly December night, with a severe infection that made it impossible for him to stand. He was quickly admitted to the Paul Harter Veterinary Medical Center at the Safari Park, where he received IV fluids and around-the-clock specialized care until he was able to move around on his own. Once he was strong enough, animal care staff moved him to the East Africa habitat, hoping he would bond with orphan giraffe Congo and learn how to not only survive in a herd, but also how to take his bottle every day from staff. Animal care staff says Baridi, who they’ve lovingly nicknamed “Frosty,” is adjusting extremely well to his new home and has become close to both Congo and Siri.

“Baridi and our other baby giraffe, Congo, get along really well, “said Lissa McCaffree, lead keeper in the Animal Care Center nursery at the San Diego Zoo Safari Park. “Baridi is able to watch Congo and learn how to behave, especially when it’s feeding time.”

Giraffes, sometimes called the watchtowers of the savanna, are slowly disappearing. In many African countries, giraffe populations are decreasing because of poaching, habitat loss and overgrazing of resources by livestock. In the past 15 years, overall numbers have declined so much that two giraffe subspecies—the West African or Nigerian giraffe and the Rothschild’s giraffe—are now endangered.

San Diego Zoo Global has partnered with the Giraffe Conservation Foundation, as well as other conservation organizations, to help conserve giraffes in East Africa. This year, a team of scientists from the San Diego Zoo Institute for Conservation Research has been developing a conservation project with Kenyan pastoralists, to find ways to collaborate and protect giraffes in the savanna, including creating a fenced sanctuary for the giraffes. At the San Diego Zoo Safari Park, the giraffe breeding program has produced more than 164 giraffe calves since the Park opened in 1972. 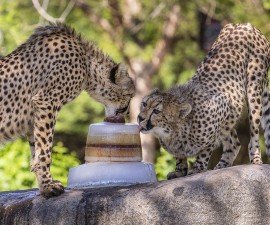 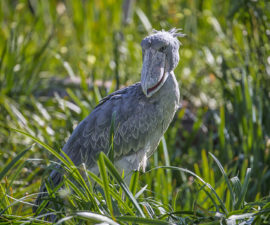