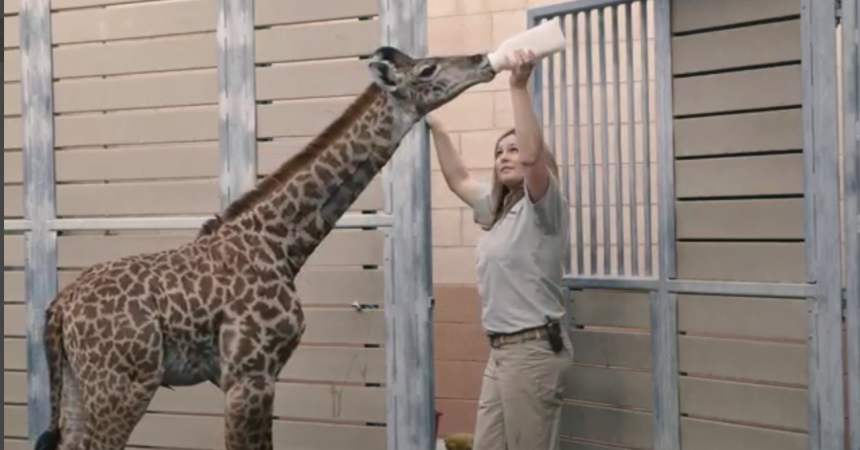 The future of Baridi, a giraffe calf, looks promising today, after animal care staff at the San Diego Zoo Safari Park labored day and night nursing him back to health. The newest member of the herd was born last month, to the joy of zoo employees and guests—but that joy turned to concern after Baridi was discovered to be extremely ill, with a severe infection that made it impossible for him to stand. Baridi was quickly admitted to the Paul Harter Veterinary Medical Center at the Safari Park, where he received IV fluids and around-the-clock specialized care until he was able to move around on his own. Animal care staff said the challenge of nursing Baridi was a fulfilling experience.

“Taking care of Baridi has been a very rewarding experience for all of us keepers,” said Lissa McCaffree, lead keeper in the Animal Care Center nursery at the San Diego Zoo Safari Park. “He’s been a pleasure to work with. He has a great personality, and we looked forward to feeding him every day.”

Nursery staff members said Baridi will soon be strong enough to join the herd’s other four young giraffes—Congo, Siri, Yamikani and Kafele—in the East Africa exhibit, where they are often seen together in a crèche, or nursery group. It is typical for young giraffes to stay together in a herd while their moms forage. The Safari Park’s giraffe breeding program has produced more than 164 giraffe calves since the Park opened in 1972.

Giraffes, sometimes called the watchtowers of the savanna, are disappearing, largely as they live: silently. In many African countries, giraffe populations are slowly decreasing because of poaching, habitat loss and overgrazing of resources by livestock. In the past 15 years, overall numbers have declined so much that two giraffe subspecies—the West African or Nigerian giraffe and the Rothschild’s giraffe—are now endangered.

San Diego Zoo Global has partnered with the Giraffe Conservation Foundation, as well as other conservation organizations, to help conserve giraffes in East Africa. This year, a team of scientists from the San Diego Zoo Institute for Conservation Research has been developing a conservation project with Kenyan pastoralists, to find ways to collaborate and protect giraffes in the savanna, including creating a fenced sanctuary for the giraffes.