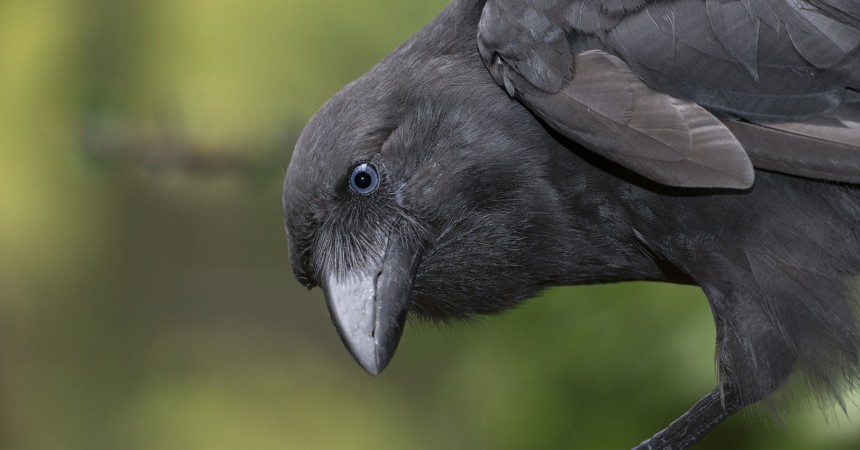 Editor’s note: While the above picture shows the beauty of an alala, it is not an image of Po Mahina.

It is with great sadness I announce the death of a very beloved bird at the Keauhou Bird Conservation Center (KBCC). Po Mahina, an alala (also known as a Hawaiian crow) was one of only 114 individuals left in the world. The alala is extinct in the wild, and can only be found at our two Hawaii facilities.

Po Mahina wasn’t just special because she was a critically endangered alala, she was a pioneer for her species. She made big news over the last two years as she was the first alala in captivity to successfully parent-rear her own chicks. That’s quite a milestone! It had been over 20 years since an alala has done that. To learn more about her parent-rearing journey read Alala: Does Mother Know Best?

The 2015 alala breeding season started off business as usual. Po Mahina was the first in our alala flock to lay eggs at KBCC, just as she has over the last three years. We watched her patiently incubate her eggs, and after 22 days a chick hatched. And just as she had done with her past offspring, Po Mahina tenderly fed and brooded her tiny chicks. As five blissful days quickly passed, the chick grew bigger and stronger. Everything seemed to be going great…until suddenly, it wasn’t.

One morning, at first light, our cameras showed that Po Mahina’s plumage was fluffed and her behavior was very subdued. She wasn’t leaving the nest to get food; instead she perched nearby and stared off into the distance. Eventually she would return to the nest to brood her chick, but would tuck her head under her wing and go to sleep. We could tell her chick was hungry from its begging behavior, but Po Mahina barely touched her food pan, if at all. We let her mate, Kukui, up to the nest and he eagerly fed the hungry chick. He tried to feed Po Mahina too, but she refused to swallow the bits of food he gave her. Unfortunately male alala do not brood chicks. We nervously watched as Po Mahina just stood there and stared sadly at her chick. This was so very out of character for her. We waited and hoped that she would miraculously snap out of it. What could be causing her to act this way? Po Mahina was our perfect alala mom—she always could be counted on to raise her chicks well.

As the day wore on, it became apparent that Po Mahina was seriously ill. The chick was rescued from the nest; it was cold but otherwise seemed very healthy. Another female alala had started incubating her own eggs only a few days before, and we decided to try fostering the chick underneath her. The foster mom quickly took to the chick and started feeding it within minutes. With the chick thriving in a new nest, we turned our attention to Po Mahina. The team here at KBCC is usually able to handle any bird first aid that comes up. This time though, Po Mahina failed to respond any of the antibiotics, fluids, or tube feeding we administered. We knew we needed to bring in reinforcements.

Dr. Pat Morris and Associate Director of Veterinary Administration Kim Williams are both based in San Diego, but have been dedicated to the veterinary needs of the alala for over two decades. When we alerted them to Po Mahina’s mysteriously declining health, they put their normal work on hold and caught the next flight to the Big Island of Hawaii. They brought all of the tools of the trade (including a portable x-ray machine) and rapidly transformed our humble little clinic into an emergency hospital all for Po Mahina.

Po Mahina was in bad shape and her weight had dropped drastically. Since she had become ill, she had lost almost 25 percent of her body weight, which is very dangerous for an alala. She was weak and her breathing had become raspy and labored. We kept her warm and gave her lots of oxygen to keep her comfortable during the initial exams so that Dr. Pat could diagnose what exactly was wrong with her. Sadly, she unexpectedly went limp and stopped breathing while I was holding her. Dr. Pat and Kim did their best and tried to resuscitate her, but her heart would not start again. I slowly set her body down and gently stroked her soft black feathers in disbelief. My heart was shattered.

Later, we learned that Po Mahina suffered from an intestinal obstruction. This is a condition has been seen in other bird species. We take solace in the fact that there was probably nothing we could have done to prevent it. Removing the obstruction would have required a very invasive and dangerous surgery, and the odds of survival wouldn’t have been in her favor.

Po Mahina was one of the most rare birds in the world and her death is a great loss. Although she leaves us her parent-rearing legacy, we still have much to learn about the breeding of these extraordinary birds. The Hawaiian meaning of Po Mahina is “night moon” and that’s a name I think is fitting. In her short life, she was able to shed abundant light (or maybe moon light!) on her species. Though the alala have come a long way since the program first started, it is still a dark time in the species’ story. Po Mahina was a bright light in that darkness. Today, the captive population stands at just 114 birds.

Po Mahina taught us so much about how the alala raise their young. This information has been invaluable so far, and we’re going to keep building on it. However, there is still a long way to go before the alala are back in the wild and raising chicks without the help of people. The Hawaii Endangered Bird Conservation Program (HEBCP), along with its partners, is confident that we’re heading in the right direction.

To Po Mahina: What an honor it has been to help care for you and witness the beauty of you raising your magnificent chicks. Someday soon, I hope to be watching your great grandchildren out in the wild, listening to their haunting calls echoing in the Hawaiian rain forest under a bright moon.

Amy Kuhar is a research associate at the Keauhou Bird Conservation Center. Read her previous blog, Redefining Fatherhood for the Alala./em> 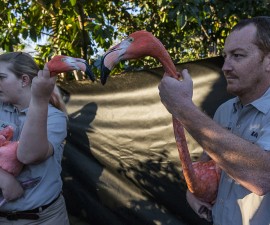 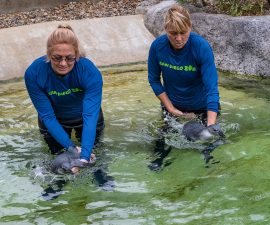 Hand Raised Penguins Introduced to Their New Home at Africa …
May 17, 2018 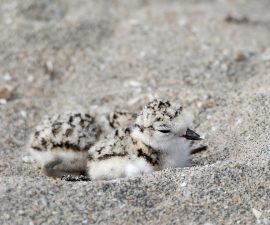