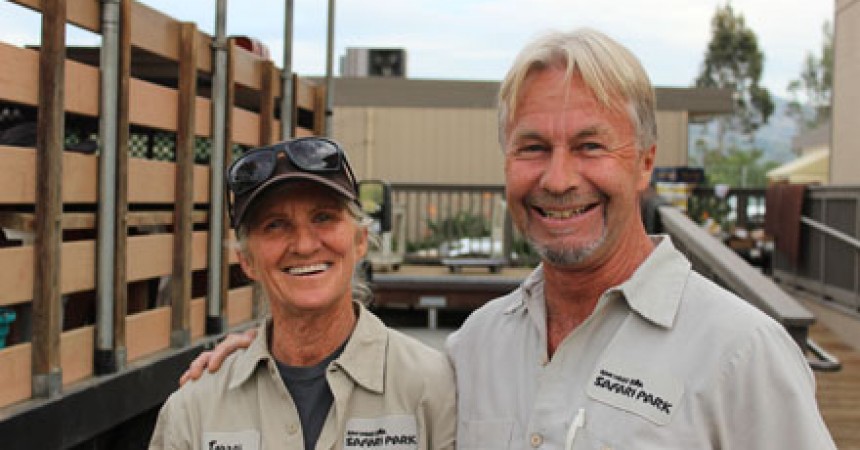 Zoo InternQuest is a seven-week career exploration program for San Diego County high school juniors and seniors. Students have the unique opportunity to meet professionals working for the San Diego Zoo, Safari Park, and Institute for Conservation Research, learn about jobs, and the blog about their experience online. Follow their adventures here on the Zoo’s website!

Our InternQuest session is coming to a close, but week six gave us a great opportunity to celebrate our experience together. We got the exciting opportunity to venture into the African savanna and Asian plains without ever leaving our caravan truck. Mammal keepers Torrey Pillsbury and Roger Petersen were our guides through the sweeping field exhibits of the San Diego Zoo Safari Park. Our experience with these two fantastic keepers was a journey to remember and a fitting finale for our amazing last month and a half.

For more than two decades, Ms. Pillsbury and Mr. Petersen have been keeping the animals at the Safari Park magnificent. They’ve cared for animals all over the Park during their careers, but are currently maintaining the first areas they started with: the field exhibits. They’re at work before sunrise, lifting hundred-pound hay bales and interacting with unpredictable animals, and they both agree without a doubt that they wouldn’t want to do anything else.

Ms. Pillsbury got her start at the Safari Park in a horseback riding show, later becoming the first female in the Park’s now-bygone elephant show. She was surprised with how many parallels could be drawn between horse care and elephant care. She had only equine experience when she first sat atop a five-ton pachyderm, but found that many of her skills were still applicable. In every field of animal care, two constants endure: feeding, and cleaning up the resulting products. Lifting a bale of hay and raking a pile of poo doesn’t change much between elephants and horses, one just requires a little more effort. The Park’s elephants, pictured above, were rescued from an overcrowded reserve in Swaziland in 2003, and were never performers in the show, but they are big fans of food. They eat around 125 pounds of food daily and—thanks to their impressive water intake—produce a staggering 300 pounds of poop.

For anyone who’s ever had to search for a missing member of their group at a theme park or shopping mall, it’s easy to imagine one of the daily challenges field exhibit keepers like Mr. Petersen and Ms. Pillsbury face. Like a lost child running through a crowd, individuals are often swept up by the masses. If one of the Thomson’s gazelle pictured above needed medical attention, how would one identify a specific animal from their herd for treatment?

Many hoofstock at the Park are identifiable by a code of ear notches. This system may sound like something found only on farms, but having a clear method of identifying individuals from afar is indispensable for medical care and genetic viability. Animals need no more than two specifically-positioned notches in each ear to create any combination of numbers,and unlike collars or anklets, they fit every animal without impeding their natural movements and can be unquestionably identified with a good pair of binoculars. The antelope pictured above has notches at the 20, 1 and 4 positions, so it can be identified using the sum of those numbers, 25. Keepers can find which animals need veterinary treatment and keep better records of an animal’s lineage to prevent inbreeding and maintain the population’s genetic diversity, as Ms. Pillsbury shows in the redbook of keepers’ records.

The first stop on our “world tour” of the field exhibits was the Southern California version of the Asian savanna, where the Park’s greater one-horned rhinos roam. Unlike a rhinoceros from Africa, who acts as the lawnmower of the plains, Asian rhino species have a greater range of motion in their necks so they can reach into the trees for food. This adaptation explained the two buckets full of hand-sliced apples which sat in the back of our caravan truck, as well as the giant creatures following us with their lips outstretched.

Everyone was as eager to feed the rhinos as the rhinos were eager to be fed. The above image of Devin and his new one-horned pal shows just how close we got—nearly close enough to touch their keratin-based horn, which is no different in its composition than our own hair and fingernails. Despite this material similarity, many maintain a misguided belief that these horns have medicinal value, leading rhinos to face challenges with poaching in the wild and intensifying the importance of their breeding in managed care facilities.

Just like the keepers who sliced all those apples, we had to do a little food preparation to satisfy the animals awaiting our visit. Celine, in the foreground, is stripping the leaves from an acacia branch. The quiet moment with the group gave her time to reflect. “My experience in Zoo InternQuest furthered my knowledge of conservation projects the Zoo is involved in and gave me a better understanding of the different job opportunities at the Zoo and Safari Park,” she remarked. “It was a very rewarding experience that has introduced me to careers I wasn’t aware of before.”

As our caravan truck rolled down into the African plains, Julianna took the opportunity to grab a selfie with a curious rhino. She said that the hours she spent with the other interns at both the Zoo and Safari Park “solidified my once random thought of working with animals to my dream career!” Hearing from experts every week taught her that anyone working with animals must have “patience and passion.”

Our adventure with Ms. Pillsbury and Mr. Petersen even let us get up-close with the world’s tallest living creatures. Interaction opportunities, like Ms. Pillsbury is demonstrating above, foster the caring attitudes necessary to conserve the dwindling populations of wild giraffes. Conservation Education Research Coordinator David O’Connor, who we met last week, is currently working to save giraffes from human encroachment and habitat fragmentation in Kenya. He’s employing a strategy known as community-based conservation, which connects local populations with efforts to help animals avoid extinction.

The giraffes came right up to the truck once they saw the acacia leaves we had worked hard to pluck. Katie, who had contributed her efforts to the harvest, summarized her InternQuest experience cheerfully: “I learned that there is more to the Zoo than meets the eye and that even the littlest of jobs can help the conservation in some way…yay for that!”

For Emily, weekly meetings with animals and conservation experts expanded her conservation knowledge. She explained, “This experience inspired me to devote my life to saving endangered species.”

Lucas’ stoic reaction to this curious giraffe is probably because he, too, is used to being the tallest one around. He found the rest of the Zoo, however, to be much more enthusiastic: “Everyone seemed so happy to go to work every day and that passion is what I have found to be the most necessary in a career. The extremely positive morale and focus of conservation in every occupation at the zoo are major incentives to continue my path in zoology.”

Claudia’s InternQuest experience caused her to rethink her future. “I headed into this internship knowing exactly what I wanted to do, but being exposed to so many amazing and different career paths has opened my eyes to the other possibilities I can have in the future,” she said. “It makes me even more excited to head off to college, paving my way towards making a childhood dream a reality.”

I started my InternQuest session hoping to be astounded with some new career choice I’d never considered previously. While I was fascinated with all of the work being done for conservation through San Diego Zoo Global, my prior ambitions remained unchanged. I’ve decided to stick with the same plan I’ve had since elementary school: become a zoo educator. Except now, after meeting so many passionate and successful people in the Zoo, I feel truly hopeful that I am on the right path to a fulfilling career that was once only a childhood dream.

Our time as interns has expanded both our knowledge and personal horizons. Many animal lovers start out life under the impression that they should be zookeepers like Ms. Pillsbury and Mr. Petersen, but in these six weeks, many of us have found that there are so many other ways out there to be involved with all the different creatures of the world. Hone your skills, explore your options, and pursue your passions: there’s a whole world waiting for you.