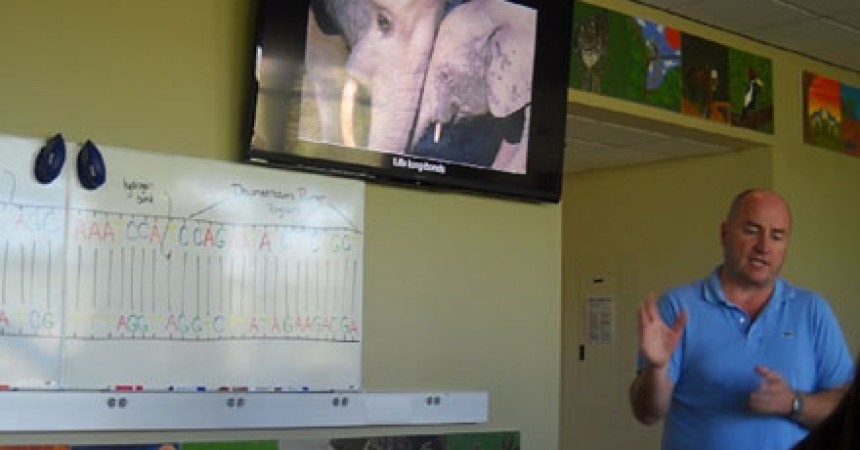 Zoo InternQuest is a seven-week career exploration program for San Diego County high school juniors and seniors. Students have the unique opportunity to meet professionals working for the San Diego Zoo, Safari Park, and Institute for Conservation Research, learn about their jobs, and then blog about their experience online. Follow their adventures here!

What do dogs and elephants have in common? They both growl! Elephants don’t always make the characteristic trumpeting calls, and actually often make rumbling sounds to communicate within their herd. The difficulty is telling the grumbly sounds apart; how do you tell what an elephant needs if you can’t distinguish its calls? Interns learned this answer from a visit to the San Diego Zoo Institute for Conservation Research, where we met with Matt Anderson and Jennifer Tobey of the Behavioral Ecology department!

Matt Anderson, Director of Behavioral Ecology, works with animal hormones to try and figure out how they influence an animal’s behavior, with the end result of boosting breeding success by stimulating those actions. He does a lot of research on animal sensory behavior, particularly sound and smell, to find out how those are implemented into animal life and behavior. Currently, he is working on a project with the Safari Park’s African elephant herd, researching their sensory capabilities to try and learn more about their capabilities of hearing and smell. Hopefully, this knowledge can eventually be applied to wild African elephants to see if they can be encouraged to wander into safer land by manipulating their senses of hearing and smell.

Here, Mr. Anderson gestures to a chart depicting the vocalizations of African elephants, who have a much wider range of sounds than originally thought. Along with the characteristic trumpet-like alarm call, elephants use growls, purrs, and rumbles to communicate with others close by within their herd. To the human ear, most of the deeper vocalizations are indistinguishable from one another, and as such are also too low for most predators to tell the difference. By speeding up recordings of lower elephant growls, the Behavioral Ecology department can push the sounds higher up on the frequency range and are able to hear the complete calls. How cool- elephants have a secret language!

Jennifer Tobey, a Researcher in the Behavioral Ecology department, also works on determining animals’ use of sensory capabilities in order to increase breeding success. She focuses particularly on the koalas, and does a lot of work with the Zoo’s koala collection observing their vocalizations and sense of smell. Wild koalas in Australia face the same issues with human development as the African elephants. As koalas’ habitat becomes more fragmented and it becomes harder for them to find one another, it is important to learn more about their sensory behavior to increase breeding in the wild.

The green box Ms. Tobey holds is a recording device used in Australia by Zoo scientists to monitor the bellows made by wild koalas versus the ones made by koalas in managed care. Koalas are far more dispersed in the wild and it is important that any observations made by a researcher are well documented for further examination back in the lab. The tiny brown microphones on either side can pick up sounds in all directions, and are powerful enough to catch any noises made by nearby animals.

Fellow intern Lucas tries on the newer recording equipment used by researchers in the field! This equipment differs from the previous recorders because it is operated by a researcher and is able to focus on a certain individual’s sound. In contrast, the older equipment is left in an environment to record every sound, and as such often obliterates the intended noise. As Lucas can attest, the microphone is so powerful that it can pick up a particular individual’s sounds in the midst of a crowded atmosphere. This is useful for work in Australia and the wild, where it is impossible to isolate an individual to hear their sounds and a researcher must have equipment able to pick certain noises out of a chaotic environment.

Intern Claudia adjusts the specialized headphones used with the recording equipment as Ms. Tobey explains its function. Currently, this equipment is being used on St. Bee’s Island, a small island off the coast of Australia, a completely uninhabited spot where koalas and animals have a natural sanctuary. Scientists from San Diego Zoo Global research koalas on this island because by figuring out their natural behaviors in an environment untouched by man, we can decide how to protect them on areas that are urbanized and apply that to protecting them in Australia.