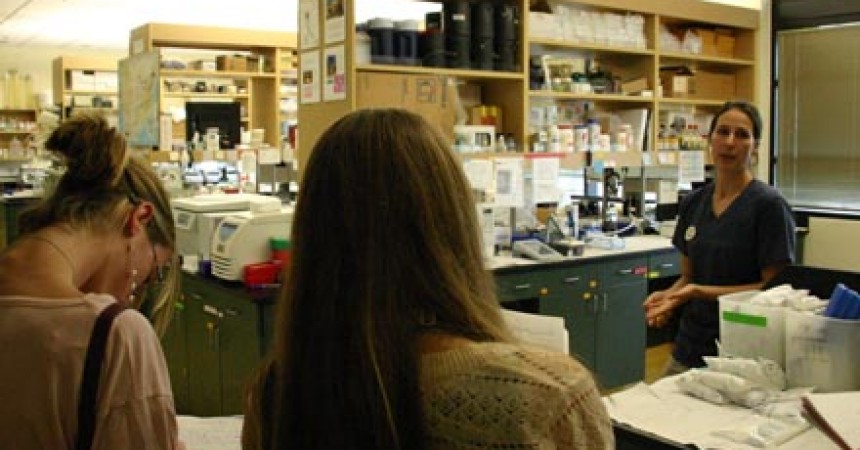 Zoo InternQuest is a seven-week career exploration program for San Diego County high school juniors and seniors. Students have the unique ability opportunity to meet professionals working for the San Diego Zoo, Safari Park, and Institute for Conservation Research, learn about their jobs, and then blog about their experience online. Follow their adventures here on the Zoo’s website!

This week the interns visited the San Diego Zoo Global’s Institute for Conservation Research where we met Josephine Braun, a Scientist for the Wildlife Disease Laboratories. Dr. Braun took us through the many labs at the facility for the department and shared her knowledge of DNA and methods of testing for various diseases. At the end of our tour, she simplified one of the major parts of her job for us by leading us in our own experiment to extract our DNA.

The pathology department consists of several rooms in order to prevent cross contamination between the bacteria and viruses they come in to contact with. Here in the main lab of Molecular diagnostics is where the scientists get tissue samples from necropsy and extract its DNA. This enables them to cross reference it on the online data base of genetic codes to find a match.

Polymerase chain reaction, or PCR, is the primary tool used to amplify DNA. In order to grab the small section of the gene they’re looking for, scientists design matching primers, starting points for DNA synthesis, to dock on to the DNA. Enzymes and nucleotides, the basic building blocks of DNA, are mixed in as well, making millions of copies of the specific gene they are looking for.

The pathologists at the Institute for Conservation Research work a lot with the chytrid fungus, which has been linked to significant worldwide population declines in amphibians. Here in the lab, scientists test samples from different amphibians around the world from over 100 different institutions. The map signifies the locations they have received samples from in the United States.

Dr. Braun shows the interns a display of a few things from necropsy. Necropsy is the department which does the animal necropsy, or animal autopsy, after they have passed from either from the Zoo or Safari Park. This assortment of items included; an eye from a Thompson’s gazelle, an intestinal stone of a red lechwe, a horn from an ibex, a foot of an elephant, an artery of a black rhino, and bladder stones from a desert tortoise.

Ms. Braun often works with desert tortoises, and showed the interns a jar of urinary bladder stones that have been collected from captive tortoises. They are formed by uric acid which makes the stones grow bigger and bigger, layering it like an onion. Scientists can feel the stone through a physical exam if it gets big enough, but in female tortoises they have to be careful not to confuse eggs for stones. Through an x-ray, the scientists can accurately diagnose the locations because the stones appear a clear white, while eggs have a more translucent shade.

The mission of the Wildlife Disease Laboratories is to remove disease, which can act as a roadblock to conservation, and since Dr. Braun works closely with desert tortoises she helps to achieve this goal by monitoring their spread of disease. For example, there is solar panel construction in the Mojave Desert near a population of desert tortoises and project managers have to remove them from the site and into another area. Before the movement, pathologists have to consider the tortoises’ diseases to prevent an outbreak or a pathogenic agent coming into another population. By studying them for multiple diseases, it can act as a complete disease risk analysis for the tortoises.

In the education lab, Dr. Braun talked more about her job experiences, and how her role at the Institute fits into both pathology and molecular diagnostics. The combination of the two fields creates molecular pathology, which is the identification, discovery, and characterization of disease agents based on DNA analyses. Dr. Braun travels for conferences and outreach programs, and on occasion goes out for field research.

Dr. Braun brought along a fun experiment for the interns to extract DNA from our cheek cells. With a lovely drawing on the whiteboard, she demonstrated how the intention of the experiment was to get the DNA out of the nucleus of the cell by breaking up the cell membranes. In order to do that, the lipid membranes needed to be broken down using other lipids. The DNA is formed in a very tight spiral surrounded by proteins in order to fit into the nucleus. Next, enzymes were used to break up the proteins. Finally, to get the DNA out you have to precipitate it, meaning this mixture all clumps together and the DNA falls out of the solution.

The first step was to get a sample of our cheek cells by swishing around Gatorade in our mouths for one minute. Then, the addition of household laundry detergent enables the cell membrane to deteriorate, enzymes to break down the proteins, and precipitation pulls out the DNA. The final product is the white stringy parts of DNA.

Dr. Braun gives us a presentation going in to detail about her job, and the many departments that make up the Wildlife Disease Laboratories. It is divided into anatomical pathology, histology, molecular diagnostics, epidemiology, and the amphibian disease laboratory. These departments work together as a team, with different areas of expertise, but most of the time they have three different areas they focus on; diagnostics, research, and education.